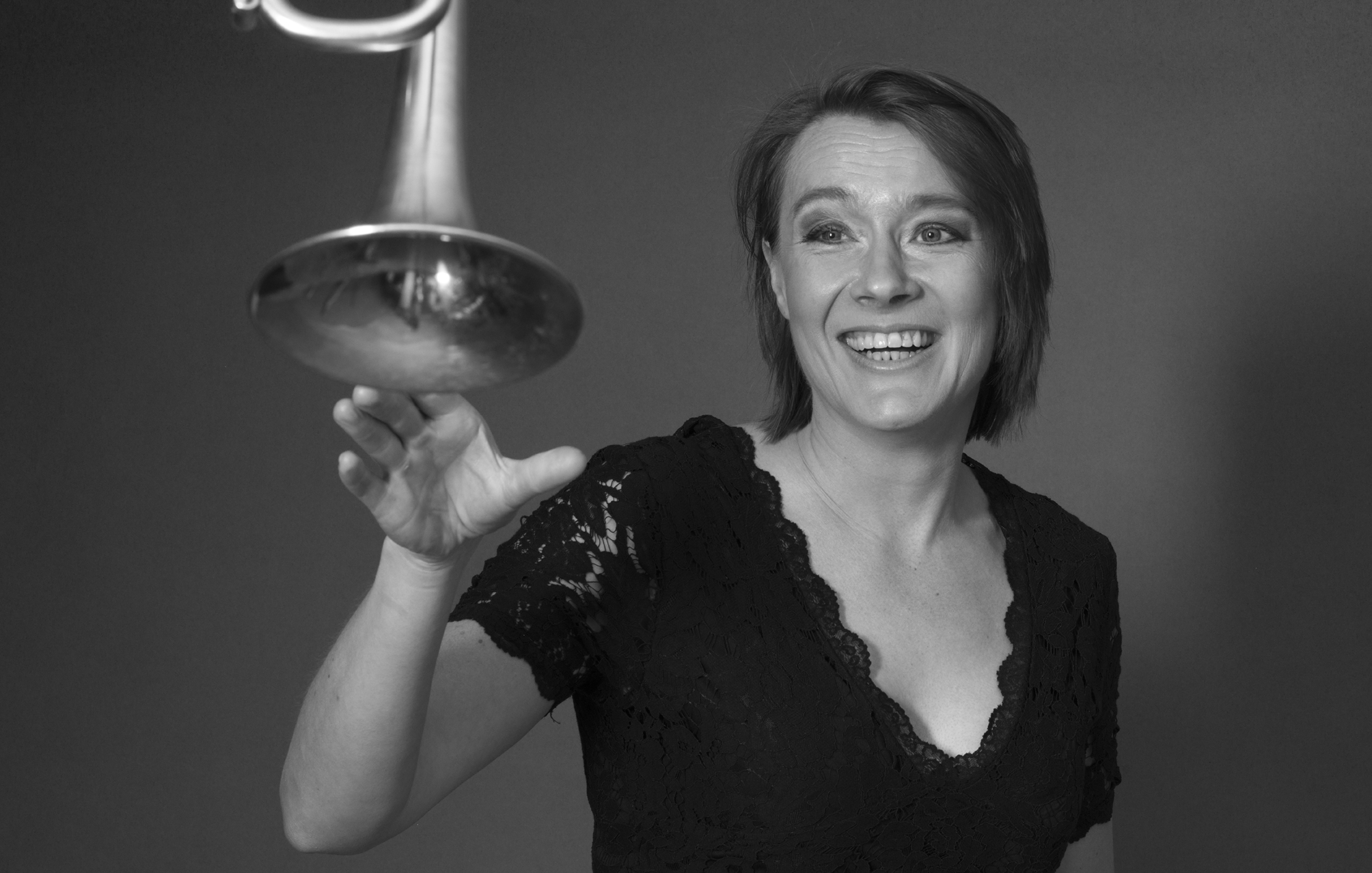 At the age of ten she made her first steps into the music world. Now, thirty years later, Ellister van der Molen is a much sort after Dutch jazz trumpet player. She performs with her own groups and plays in larger orchestras. Her fine technique allows her to play everything that is asked of her: Salsa, Latin, bebop or Swing. She is also an engaging soloist with a beautiful trumpet and flugelhorn tone.

Ellister van der Molen is one of the few female trumpeters at the top of her game within the European jazz scene.  In recent years she’s also been a regular player in theater productions.  Starting with the performance ‘A Night at the Club’, followed by ‘Swingin’ Harlem’. In ‘Swingin Harlem’ famous Dutch jazz musicians recreate an atmosphere reminiscent of jazz clubs in the New York district of Harlem before the Second World War. The theatrical performances also aim to stimulate the interest in jazz in the Netherlands.

She has produced a number of fine CDs as a leader and recently was part of a new band producing the album ‘RED’. It has a soulful jazz flavor and features Bob Wijnen on Hammond Organ, Ellister’s classic trumpet playing, Gideon Tazelaar on tenorsax and Wouter Kühne, drums. One of her many fascinating projects is the quartet with German baritone saxophonist Tini Thomsen. The ladies play in the tradition of the quartet of Gerry Mulligan with Art Farmer from the 1950’s and it sounds really great!

Ellister van der Molen first experienced jazz at the age of twelve when her father took her to a jazz concert for the first time. As a ten year old she was already attending classical junior education at the Royal Conservatory in The Hague, however after her introduction to jazz she knew this kind of music would determine her future. Ellister says she cannot imagine a different profession than to be a jazz musician. “The choice to make music is one of the heart, not for the money. It makes sense that you really follow your heart and play the music that makes you happy as much as possible.’’

Ellister names the trumpeter Clifford Brown as a key source of her musical inspiration. “I have a lot of heroes, both on trumpet as well as other instruments. But of all, Clifford Brown is still the one that moves me the most. Every song he plays is so nicely done, from start to finish. Such a nice sound and such a mastery, but also with a lot of spontaneity.”

The Dutch trumpet player also has a lot of admiration for the composer Billy Strayhorn. ”He wrote such beautiful pieces for the Ellington band. The compositions are just a bit different than you would expect when playing. Timeless!”  Ellister also loves his ballads. “I like to play at least one of his ballads in every concert I am in.’’

Ellister van der Molen also plays regularly with the two young tenor saxophone talents in the Netherlands, Floriaan Wempe and Gideon Tazelaar. “It’s nice to play with people who have a different approach to the music. The interplay of making music with people from another generations ensures that you keep your mind sharp. It is refreshing for the younger guys as well.’’

Jazz may be her thing, but Ellister van der Molen likes to listen to classical music. ,”When listening to jazz I am pretty much bothered by a professional deformation: I am constantly analyzing. I can relax far more hearing classical music. Moreover, it is wonderful to undergo a nice tension arch. The whole concept of a symphony is delicious? A piece of such length completely composed… for me that is a good alternative to be watching a movie.’’

Ellister van der Molen has a clear picture of how to keep the interest of jazz alive. ,”I think it starts with self-awareness. If you are trying too much to be ’young and hip’, you forget to take yourself seriously. Show what your real values are as a musician: creativity, artistically, aesthetics etc. Quality is a better selling argument than many people sometimes think. But also communicate honestly about what you have to offer as a musician.’’

“I think people with all the comforts of the modern era sometimes forget to look for the really great things. Netflix is easy; a live concert is even more fun. Putting Spotify on shuffle is easy, picking an album from your collection and sitting down to listen is full immersion, and I feel is much more fun.’’

“I think people even get caught up in a rut in their spare time. What compares with the satisfaction of reading a book, going to a concert, listening a CD, to be in a theatrical performance or another active experience that you will remember for the rest of your life. In other words: Life is too short, make enjoyable choices!’’