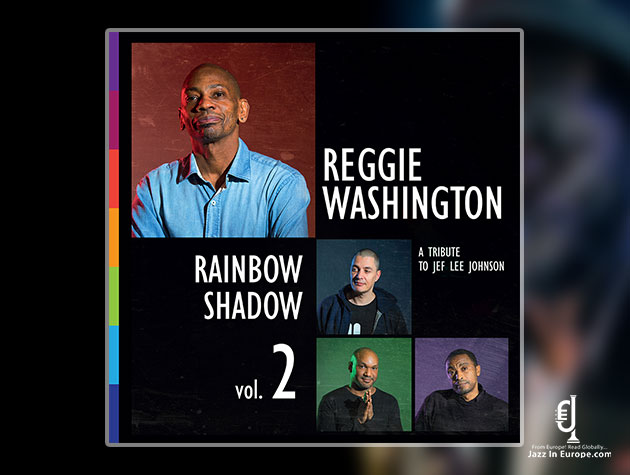 This album is the follow up to Reggie Washington’s successful 2015 release Rainbow Shadows Vol 1 and the continuation of his tribute to Jef Lee Johnson. This month marks 5 years since Guitarist, singer and songwriter Jef Lee Johnson died of complications from pneumonia and diabetes at age 54. Johnson’s list of credits during his short but productive career are to numerous to list however it was in Ronald Shannon Jackson’s group Decoding Society in 1986 that Jef Lee and Reggie came to meet.

Reggie Washington is a bassist of high standing and has toured and recorded with some of the greatest names in jazz during his career. In 2006 Washington released his first album as leader titled “A Lot of Love, LIVE!”. This was followed by the 2012 with the album “Freedom” and in 2015 Washington released Rainbow Shadows Vol 1.

In the liner notes to Vol2 Reggie stated “This album expresses many feelings reflecting today’s tense geo-political climate. It speaks to our times. And if you carefully listen to and read Jef Lee’s lyrics, they ring true.”

I have to admit this was not an easy review to write. This statement is not at all meant negativity, I found I needed multiple hearings to fully grasp the depth and diversity burned onto this disc. As one would expect from an album paying homage to Jef Lee Johnson that blues influences will play a prominent role. The album fills this expectation to fullest however the story doesn’t finish there, what I like most about the album is that Washington and crew have taken the blues and infused this with a modernity that expands and adapts the musical legacy of Jef Lee Johnson and thereby ensuring that his music will live on and continue to cross boundaries.

The album opens with a track called “Silence”. In the notes to the album Reggie states that the track was originally intended to be an instrumental however when vocals were added by Philadelphia native Monique Harcum Reggie says “the choice became clear that this track should open the album”. I can’t agree more, “Silence” sets the scene for an album that draws you in from the first note and continues to surprise with each track. This track is firmly rooted in the Mississippi Delta with guitar and drums holding down the groove allowing Reggie the freedom to double the melody in unison with Harcum.

As the title to the following track “Blind Willie McTell” eludes, a latent blues undertone is once again present although subtle to say the least. This track, originally by Bob Dylan, is opened by Washington with a bass solo. In due course the track morphs into two way conversation between Marvin Sewell on guitar and Washington tied together beautifully by Patrick Dorcean on drums. As the track progresses DJ Grazzhoppa joins the conversation adding samples of some of the most idiotic statements made so far by the current U.S. President, Donald Trump. I have to admit at the end of the track I was left speechless, incredible. Having played this album many times I have to claim this tune as my favorite track on the album.

The structure of the album is interesting with longer extended tracks being interspersed with shorter tracks, often with spoken word, that function as a segue to what’s coming next. This in no way negatively effects the organic flow of the album and in my opinion only adds to the continuity by adding context. I particularly enjoyed the rhythmic tension created in “Hype” parts 1 and 2 and the down low funk of “Sizzlean”, a tune about an artificial breakfast substitute bacon strip popular in 1970s and 80s.

Reggie’s solo peice “Other Thoughts of Fanny’s Toy” is a masterpiece in melody. Of particular note is the section where both tracks come together being doubled an octave apart before once again splitting off for the return of the theme.

This album is rooted in the blues and full of creativity. The performances are outstanding as is the production quality – I can’t recommend this album more highly. As a tribute to Jef Lee Johnson, I can only imagine he is wearing a heavenly grin from ear to ear.

You can Buy or Stream the album here.

More Information on Reggie Washington can be found on his website.

Reggie Washington will be presenting the CD Live in Paris at New Morning on the 13th of February. More Details here.