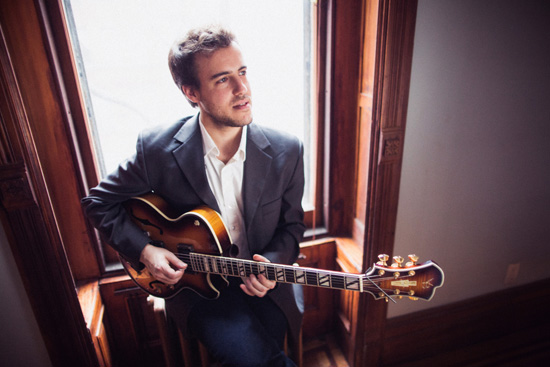 New York based guitarist Gilad Hekselman will be touring his new project ZuperOctave featuring pianist Aaron Parks and drummer Kendrick Scott this week in Europe. The tour will see the band perform in Germany, the Netherlands, Poland, Belgium and Ireland.

After establishing his sound in the classic jazz trio and quartet formats, Hekselman goes exploring with a bass-less semi-electronic band employing some of his old songs and adding some especially written ones to the repertoire. Hekselman and Parks take on the bass part, and sometimes just leave that space open. In terms of passion for melody and rhythm, the music of ZuperOctave is no different than Gilad’s music we are already familiar with however, in most other aspects, the band presents a brand new sound here.

ZuperOctave revisits characteristic electronic instruments such as Fender Rhodes, synthesizers and drum pads. Alongside Hekselman the trio features pianist Aaron Parks, who made name in the bands of Joshua Redman and Kurt Rosenwinkel, and drummer Kendrick Scott (Charles Lloyd, Terence Blanchard, among others).

Gilad Hekselman has been developing a reputation as one of the most promising guitarists in New York since his arrival in 2004. After only a few years this native Israeli has shared the stage with some of the greatest artists in the New York City jazz scene including Chris Potter, John Scofield, Esperanza Spalding and many others.