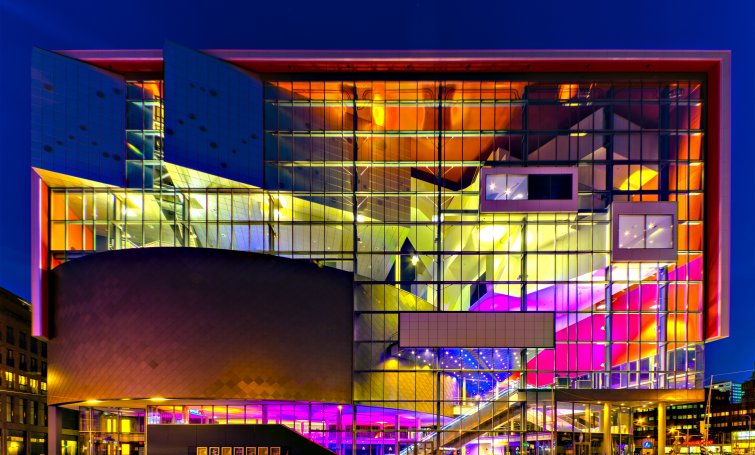 The Dutch city of Utrecht is located in the hart of the Netherlands and has always been seen as a cultural center. In 2004 the city council presented plans for a new center to replace the ageing Muziekcentrum Vredenburg (the city’s main concert hall). These plans were part of a larger plan to modernize the area around the Utrecht Central Station. The idea was to bring the Muziekcentrum Vredenburg, Pop Venue Tivoli and the SJU jazzpodium under one roof in a new cultural center located on the site of the old Muziekcentrum.

Unfortunately due to the demise of the SJU jazzpodium due to financial pressure’s the organisations jazz programming was taken over by the Tivoli. In 2014 the new center named TivoliVredenburg containing five concert halls a café and restaurant opened it’s doors. Since this time the venue has presented a regular series of jazz concerts featuring both local and international acts.

This month the venue presents a strong line-up including performances by international acts as Marcus Miller, Jose James, Pat Metheny to name a few as well as hosting a number of concerts from the Le Guess Who? 2017 festival. The festival is a leading International festival known for it’s experimental programming and the ability to cross boundaries. This festival takes place from the 9th to the 12th of November in the centre of Utrecht and presents more than 150 acts in various venues.

Highlights in November include on Monday the 13th a performance by Marcus Miller and his band followed on the 14th by the Mike Stern/Dave Weckl band featuring Bob Malach on sax and Tom Kennedy on bass. Following this on Wednesday the 15th the venue will host New Orleans trombonist/vocalist and Blue Note recording artist Trombone Shorty.

The following week will see performances from Maceo Parker (Wednesday the 22nd) and Ken Vandermark’s quartet “Made To Break” on Friday the 24th. Described as a radical and experimental ensemble bringing Ethiopian music, new music inspired by John Cage and Morton Feldman together with modern jazz improvisation. The ensemble includes Austrian Christof Kurzmann on Loops and electronics, American Tim Daisy on drums and the Dutch bassist Jasper Stadhouders.

Saturday the 25th brings the multi Grammy nominated pianist Fred Hersch with his trio (John Hébert bass and Eric McPherson drums). This concert is part of the Dutch “Night of Jazz” that features jazz concerts in all of the major cities in the Netherlands (more on this later on Jazz In Europe). Also on the 25th is Wicked Jazz Sounds with their blend of Jazz, soul, hip-hop, funk and Latin.

Sunday the 26th sees the Italian trumpeter Enrico Rava and his new quartet. Prior to this performance there will be a screening of the documentary “Bill Evans – Time Remembered” as part of the “Jazzfilms in de Club” series. All in all a feast for jazz lovers in the Netherlands.

For the full schedule and tickets visit the Tivoli/ Vredenburg website.