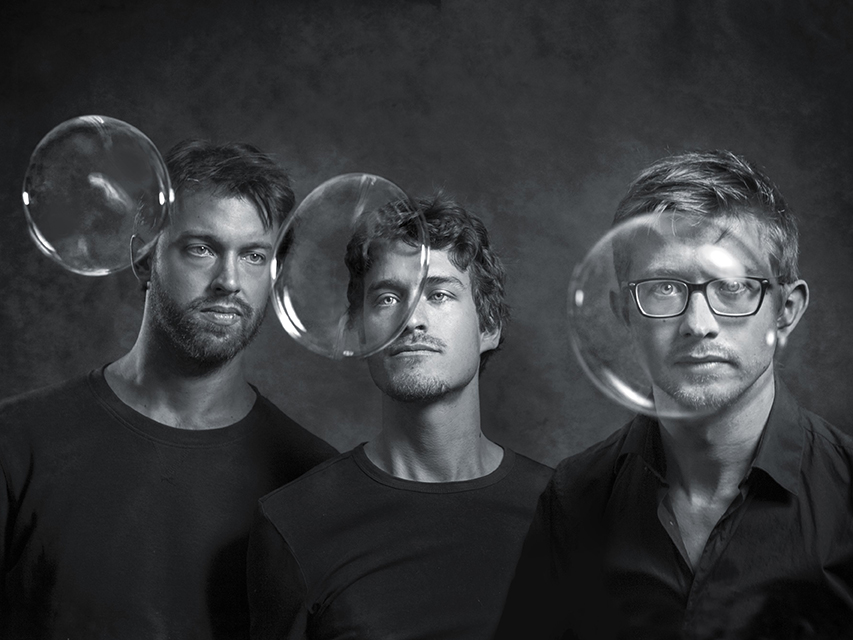 There’s a restless spirit in Kapok, the trio who tour in England from November 26 to 29 for the Going Dutch celebration of jazz from the Netherlands in the UK and Ireland.

“We always decide everything together and we’d been frustrated by the horns not being able to produce chords or notes beyond a certain length and having no bass,” says Kliphuis, whose group follows the Instant Composers Pool Orchestra in touring for Going Dutch. “At the same time, we feel that the chemistry between the three of us is good, so we didn’t want to add extra musicians and in the end we decided to add extra instruments instead.”

With new sound possibilities offering an almost orchestral palette, the trio set to work and quickly found that they’d exhausted the song approach they’d developed – and so they’ve changed to the totally freewheeling, improvised style they’ll be demonstrating on tour.

“It’s exciting for us and we feel that excitement will translate to the audience,” says Kliphuis. “We have this whole new range of sounds and although we’re no longer working with the indie pop style that was originally at our core, we can still communicate on a certain level and involve people.”

Kapok came about by accident. Kliphuis, who like his brother, the swing violinist Tim Kliphuis, learned to play in the classical tradition before moving on to study improvisation, had booked a studio for two weeks’ recording with Remco Menting and the guitarist they’d been working with up to that point. When the guitarist dropped out, rather than cancel the studio booking, they invited Timon Koomen to jam with them.

“I’d always improvised,” says Kliphuis. “I was always trying things or writing my own tunes and after a few years of playing in youth orchestras, playing the classical repertoire, I decided this discipline really wasn’t for me. At the same time, I was still as excited by the possibilities of the horn as I was when I first encountered a row of French horn players playing these shiny, powerful sounding instruments at an orchestral concert as a seven-year-old.”

Tom Varner, one of the most prominent French horn players to have made it a bona fide jazz instrument and now teaches in Seattle, was very supportive and helped with advice and tips, and players such as John Clark, who worked with Jaco Pastorius, among many others, were inspirations. Kliphuis, however, wanted to find his own direction and he found it, first with Menting and now with Menting and Koomen as Kapok.

“We were quite surprised that Kapok became such a big thing,” he says. “We played all the jazz gigs in Holland and then toured in Germany but we were also attracting the indie audience, which was interesting because our first CD came out of that two week session we went into with no preparation. We just wanted to try things and we discovered a lot and found we could write a certain type of song that we could stretch out on when we played live.”

Their efforts to reach audiences beyond the jazz-following public have been successful also in classical circles, where they collaborate with a string quartet, and in world music. Having toured to Egypt, Turkey and Morocco, they’re keen to work with indigenous musicians and are now making masterclasses and workshops with local players an integral part of their touring schedule.

“We’re always open to new ideas,” says Kliphuis. “For us, music is about sharing and including as many people as possible, and having played at London Jazz Festival we’re really looking forward to going out and playing these gigs in other parts of England.”