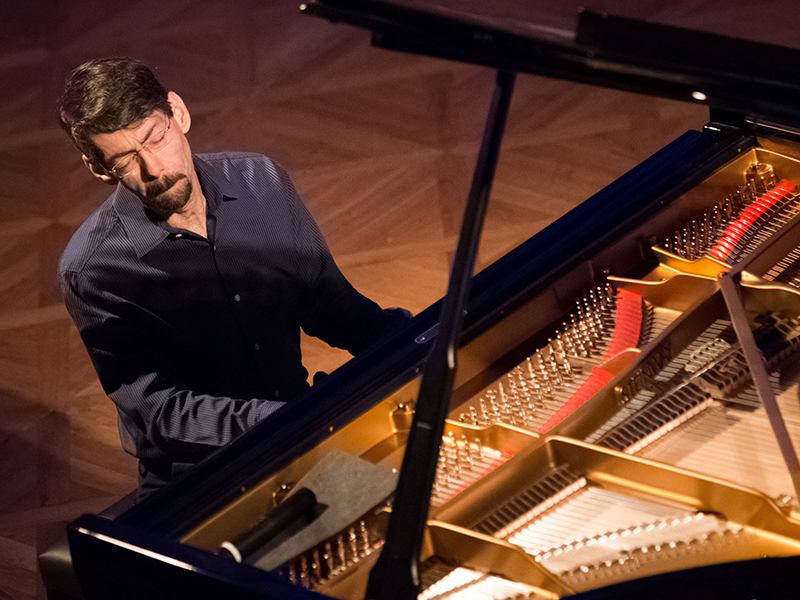 The prize honors the totality of Hersch’s career on the occasion of the release of his solo disc, Open Book (Palmetto Records, September 8, 2017), and of his autobiography, Good Things Happen Slowy: A Life in and Out of Jazz (Crown/Archetype, September 12, 2017). In addition Hersch has also won the Coup de cœur jazz for his recording Open Book. In a statement Hersch said “I am so honored to be recognized by l’Académie Charles Cros, the Académie has been a generous and long-time supporter of my work and I am humbled and grateful for these major honors.”

Fred Hersch belongs to a select member of jazz’s piano pantheon, he is a pervasively influential creative force who has shaped the music’s course over more than three decades as an improviser, composer, educator, bandleader, collaborator and recording artist. A ten-time Grammy Award nominee, he continues to earn jazz’s most prestigious awards, including recent distinctions as a 2016 Doris Duke Artist and 2016 Jazz Pianist of the Year from the Jazz Journalists Association.

Hersch has long defined jazz’s creative edge in a wide variety of settings, from his breathtaking solo recitals and exploratory duos to his extraordinary trios and innovative chamber settings. With some three dozen albums to his credit as a leader or co-leader he can add the Prix in Honorem Jazz and the Coup de cœur jazz to his already extensive list of international prizes.

“Each time one hears Fred Hersch (especially solo), one is struck by the type of magic which imposes itself from the opening measures: by the strong counterpoint in the left hand, while the right hand lays out, comments on, and extends the melodic field (the song). The clarity of the lines which progress in complete independence, and yet with absolute coherence, reminds me each time of Glenn Gould, who in a challenging, defiant way mixed dizziness and legibility. Lennie Tristano is also another example of the direct connection between one’s fingers and the musical thought however, there’s nothing abstract: sensuality and lyricism come from the same voice.

This musical miracle takes place whatever the material: an original composition, dreamy as much as sinuous; a jazz classic from the 50’s (Whisper Not); a bossa nova that has often been reworked (Zingaro, alias Retrato Em Barnco E Preto, also known as Portrait in Black and White), played the way one plays a prelude and fugue of Bach, but while forgetting the division between them; even a totally free improvisation (Through the Forest), recorded in concert, where the vertigo becomes unfathomable. And it’s all pleasant, including Eronel by Thelonious Monk (the pianist loves to go in that direction, notably at the end of a performance). To conclude, Fred Hersch offers us a piano version of a song by Billy Joel, And So It Goes, as if to remind us of his attachment to song. Everything is played with a devotion to jazz, and with the great freedom of interpretation and even of metamorphosis that that music offers.

One can retrace the life of this rare musician by reading (in English at the moment) the autobiography that he has just published: Good Things Happen Slowly, A Life in and Out of Jazz (Crown Archetype). There one discovers the singular journey of an artist who, in his personal life as well as in his musical life, employs all his energy to become himself. Music in general, and jazz in particular, are invoked in these pages with force and lucidity, notably through the portraits, and descriptions of meeting with major artists: Jaki Byard, the encyclopedic professor of jazz piano at New England Conservatory in Boston; McCoy Tyner, who after a concert made himself accessible to the admiration of a young musician. What follows, chapter to chapter, hides nothing of a life which had its moments of suffering and grave illness. And yet Fred Hersch is here, and well, more alive than ever, even more accomplished in his art!

The Prix in Honorem permits us to celebrate a complete artist who has issued under his name dozens of discs, who has also tackled chamber music, and who has been the pianistic accompaniment to the great jazz voices (Norma Winstone, Jeri Brown, Jay Clayton, Janis Siegel) but also the great opera voices (Renée Fleming, Dawn Upshaw).”

The Académie Charles-Cros, (Charles Cros Academy) is an organization located in Chézy-sur-Marne, France, that acts as an intermediary between the French government cultural policy makers and professionals in music and the recording industry. Every year since 1948, the Academy has given out its grand prize, the Grand Prix du Disque, to recognize outstanding achievements in recorded music and musical scholarship. Prizes are awarded in the field of popular song, classical music, jazz, and other categories of recorded music, as well as for outstanding books of musicology.

Editors Note: For those in the Netherlands Fred Hersch and his trio will be at the Tivoli in Utrecht on the 25th of November. More Information here.