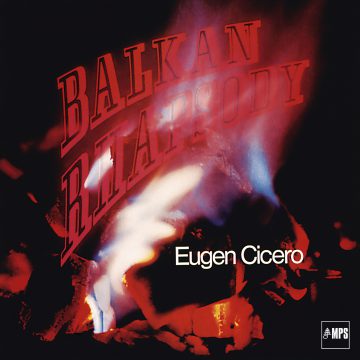 Romanian Eugen Cicero performed his first piano concert with a symphony orchestra at the age of six. His first SABA/MPS album, Rokoko Jazz sold over a million copies. Known for his rhapsodic style, Cicero was acknowledged as an “all-around entertainer, someone who gives a damn about stylistic borders and takes whatever is useful, from Bach to Cole Porter”.

Cicero’s pristine technique and ability to meld the stringent demands of classical with the exploratory improvisation of jazz assured him a large international audience, as attested by this, his seventh MPS album. Austrian Hans Rettenbacher was known among musicians as a consummate bassist. He worked in Europe with the likes of Eric Dolphy, Don Ellis, and Friedrich Gulda. MPS’s unofficial ‘house drummer’ Swiss drummer Charly Antolini worked often with Cicero, and is well-known for his own band. The two fit hand-in-glove with Cicero’s free-wheeling style. The compositions are all Cicero’s with virtually every piece a colorful mélange of tempo changes, references to pop tunes, jazz standards, folk, and the classics played with verve, humor, and fantasy.