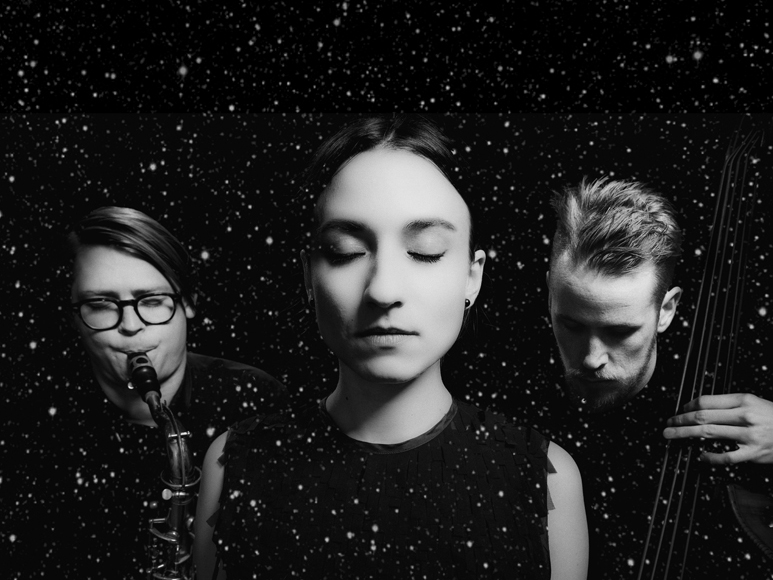 With a sharp-eared love of the past but a sensibility resolutely of the present, new-era jazz singer Lucia Cadotsch’s trio “Speak Low” – featuring tenor saxophonist Otis Sandsjö and double-bassist Petter Eldh – reanimates songs long seemingly set in amber. Hailing from their adopted home of Berlin, Germany – the 21st-century culture capital of Europe – these three musicians come at the Great American Songbook from a European angle, their “retro-futurist” sound as informed by remix culture and free jazz as by their appreciation for classic vocal records.

Lucia, Otis & Petter bring “Speak Low” to New York City for the first time in January 2018. The trio performs on January 12 as part of the Winter Jazzfest Marathon and on January 13 in the Sound It Out series at Greenwich House Music School, with pianist Elias Stemeseder as a special guest for a couple of tunes on both nights.

Note: The Greenwich House show will be part of a special 6:30pm double-bill with Jagged Spheres, featuring Stemeseder, saxophonist Anna Webber and drummer Devin Gray, on the second half.

Lucia explained the individualistic approach she takes with the trio: “I want to be subtle and melodic in my phrasing, but I also need roughness and intensity in music. Otis and Petter say in the songs what I don’t say myself. While I’m the still center, they can storm around me.” Alluding to the act of stripping nostalgia from this repertoire, Otis added: “Our common unsentimental approach to these melodies takes away the glossiness that these beautiful songs can often get stuck in.”

Discussing their arrangements, Lucia said: “What we do is like sampling culture in hip-hop. We might quote a detail from an old recording, but change the register and tempo and then loop it into our arrangement organically.” The trio arranges its songs together, often inspired by obscure details from vintage records. As DownBeat noted, they turn a high-register clarinet part in “Deep Song” from a Billie Holiday LP into a bass line; they echo an intro improv seen in a live Nina Simone video of “Ain’t Got No” in their arrangement; they repurpose a marimba line in Johnny Hartman’s version of “Slow, Hot Wind” as an outro hymn melody.

The trio’s distinctive black-and-white videos for Speak Low have a European art-house feel, as with the official album trailer here. There is also a gorgeous one-shot music video for “Slow Hot Wind” as well as live videos for “Speak Low” and “Strange Fruit” / “Ain’t Got No” among others.

Touching upon their European roots, Lucia, Otis & Petter have lately added to their live repertoire an arrangement by the great Italian modernist Luciano Berio of the Anglo-American folk song “Black Is the Color of My True Love’s Hair,” as well as an English translation of the dark “Ballad of the Drowned Girl” by Kurt Weill and Bertolt Brecht. About the storytelling resonance of old songs, whether sung by Lotte Lenya or Billie Holiday, Lucia concludes: “Times change, but humans don’t seem to, for better and worse.”

More information on Lucia Cadotsch can be found at her website.