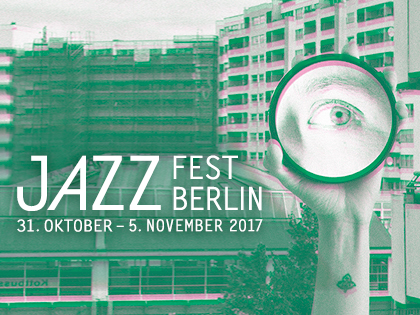 Once again from the 31st of October until November the 5th the city of Berlin will host the 2017 edition of Jazzfest Berlin. This years festival presents an international program that crosses both musical and cultural borders.

In his last year as the festivals Artistic Director, Richard Williams stated in his forward to the festival that “In 2017,  Jazzfest Berlin will demonstrate that this music, while retaining its precious African American core, welcomes all those, whatever their origins, who respond to a spirit that celebrates the right to be different, to challenge orthodoxies and to find ways of working with others.” The 2017 festival has been extended to six days and begins not in its traditional base in Wilmersdorf but in the suburb of Kreuzberg, an area of Berlin know for its diversity of cultures.

For the first time in the history of the festival New York based drummer and composer Tyshawn Sorey has been named “Artist In Residence. Sorey will be heard during the festival with his regular trio as well as a special late night performance combining solo performances and a duo with Berlin based saxophonist Gebhard Ullmann. He will also lead a project titled “Conduction” that was devised for the festival and features musicians from the Berlin scene.

Trumpeter, Ambrose Akinmusire will perform an extended piece inspired by recordings made in 1939 by a female inmate at a Mississippi prison farm. Geir Lysne, the director of the NDR Big Band will conduct the world premiere of piece reflecting the music of his native Norway and in the Evangelical Church on Hohenzollernplatz, the Iraqi-American trumpeter Amir El-Saffar will lead a piece composed to take advantage of the venues unique acoustics.

The festival also includes performances by Nels Cline and his “Lovers” Project playing Broadway and Jazz standards with a chamber orchestra, solo piano recitals by pianists Michael Wollny and René Urtreger and for lovers of the Hammond a performance by Dr Lonnie Smith.

On Saturday 4 November, lovers of jazz and film can enjoy a screening of Louis Malle’s first feature film “Ascenseur pour l’échafaud” featuring the famous soundtrack by Miles Davis. Malle asked Miles Davis who was on tour in Europe to record the soundtrack. For the recording Miles used the band he was touring with that included, Saxophonist Barney Wilen, Bassist Pierre Michelot, Drumer Kenny Clarke and pianist René Urtreger. It should be noted that of this quintet Urtreger is the only surviving member and will perform a solo concert later that day.

Of special note is a performance celebrating the centenary of the birth of Thelonious Monk. For this performance American pianist John Beasley will present his MONK’estra with special guest Till Brönner on the main stage at the Haus der Berliner Festspiele. On the 5th of November The Trondheim Voices join Kit Downs at the Kaiser-Wilhelm-Gedächtnis-Kirche.

All in all a highly adventurous and inspirational program the respects tradition while reaching for the new. Richard Thomas, summed this up perfectly in his forward where he states “Jazz exists to remind us of the simple lesson: that people and societies are at their best when they work together in a spirit of openness and inclusion”. I believe, in these troubled times where nations and societies are dominated by the voice of ignorance and intolerance, these are wise words emanating from a city that knows all too well the damage caused by building walls not bridges.