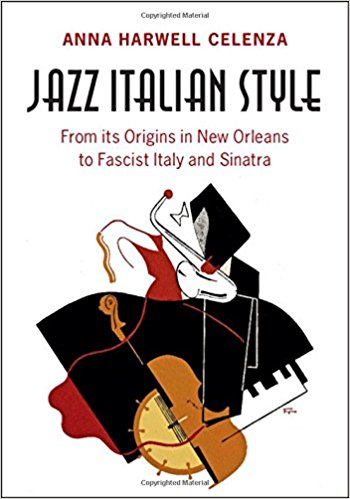 Anna Harwell Celenza’s book “Jazz Italian Style” published by CUP (Cambridge University Press) was published earlier this year and I was hooked.  I need to clarify: this is not only because the world of jazz and that of publishing need more books on Italian jazz, not only because I am of Italian origin, but, also and most importantly, because this publication is indeed an incredible read from beginning to end.

Sometimes, I make it a point to go straight to the end of a book and read through the bibliography.  A weird habit, I hear you say, but one that still fascinates me.  So to say that “Jazz Italian Style” is well written AND well researched would be making a disservice to Mrs Celenza.   It is vital instead to remember how a book like the one being reviewed here is not just a socio-historical musically charged one, but it is to do with one of the most important period of Italian history.

Where to start then?  The author accompanies her husband, in the Autumn of 2010 to Rome as he has been recently appointed Director of the American Academy in Rome.  The trip to the Eternal City proves a magnet for Mrs Celenza who begins to be “intrigued with the local jazz scene”.

With five chapters, highlighting the origins of jazz in Italy before and after the World Wars, “Jazz Italian Style” is full of stories and historical facts that will marvel the aficionados as well as the newly converted to the scene.

There are illustrations from 1917 through to 1962, depicting the likes of Victor Records, the conductor Cinico Angelini, the great Pippo Barzizza as well as the famous female Trio Lescano who were signed to Cetra Records.

These are phenomenal photos, put together after a clearly extensive research and study.

Under Mrs Celenza’s clever narrative, we learn how “under Mussolini’s leadership, jazz served as a recruitment tool, a symbol of what the modern state was willing to embrace”.  Fascinating, intriguing and scary at the same time, Celenza also tells us about Sinatra and his various trips to Italy, of his Northern Italian origin from his mother side and Southern one (Sicily) from his father’s side.

The author writes about Sinatra recording a traditional ballad in the difficult Neapolitan dialect, “Torna a Surriento” (Come back to Sorrento) in 1950 in an effort to revive his career, but that proved in a way a double-edged sword as “he struggled with the pronunciation. His ignorance of the language made his phrasing sound halting and leaden”.

Full of in-depth historical facts and anecdotes, “Jazz Italian Style” is a smooth read as well as a fantastic educational book.

I am, in fact, currently re-reading it!