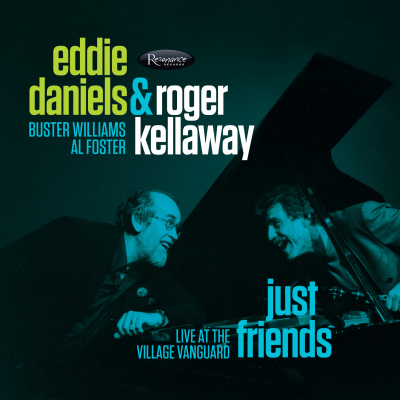 Resonance Records is proud to announce the release of Just Friends: Live at the Village Vanguard, a spirited never-before-heard live recording by clarinetistEddie Daniels and pianist Roger Kellaway featuring bassist Buster Williams and drummer Al Foster. Recorded by Resonance Records founder George Klabin in the front row at the storied Village Vanguard in Greenwich Village, New York City in late 1988, Just Friends is a revelatory meeting of two jazz masters, with one of the best imaginable rhythm sections, deep in dialogue on a set including the venerable standard “Just Friends” and two original pieces each by Daniels and Kellaway.

Klabin received permission from the band to record on this Saturday night of their weeklong run at the Vanguard, and came prepared with a high-quality cassette recorder and a single Sony stereo microphone. “I just placed the mic on the table facing the band, hit ‘record’ and let it run. It was as simple as that,” Klabin recalls in his liner note essay. “The tape sat in my personal collection ever since I recorded it. Nearly three decades later, in 2016, I pulled it out and listened to it. Immediately I was transfixed again. I decided to send digital copies to Roger and Eddie for their enjoyment.” Discussions ensued. Klabin got the go-ahead from all four quartet members and began laying plans for this remarkable DIY recording to finally come to light. The album cover photo is by the legendary jazz photographer William Claxton, with interior images by Tom Copi and Richard Laird, all beautifully assembled into the CD package by longtime Resonance designer Burton Yount.