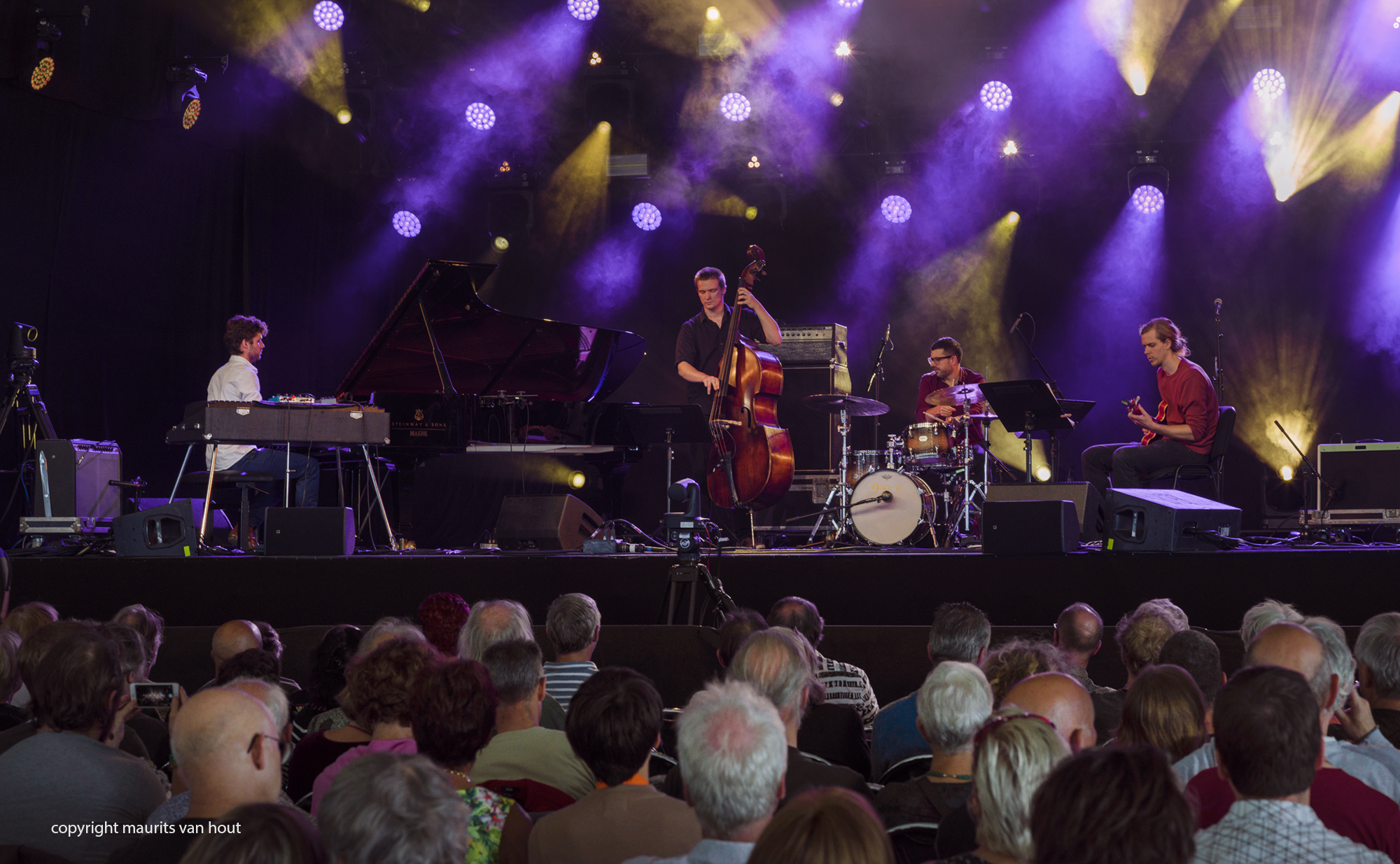 I sometimes still question why I enjoy Jazz Middelheim that much. Perhaps It has to do with the atmosphere at the festival, the surroundings (Castle Park), the Flemish geniality and of course the music in Antwerp. Somewhat like the ingredients of a Jazz music composition, but the arrangement being a puzzle at first. My diary helps me to understand it better and I hope you will too. In four days (3-6 August) 17,000 music lovers visit Park Den Brandt. This year, the drummer Mark Giuliana turns out to be an amazing Artist in Residence.

Artist in Residence Mark Guiliana opens the festival with his quartet. The drummer is great form, as is tenor saxophonist Jason Rigby, who shines in David Bowie’s “Where are we now”.

Bill Frisell, guitar, and Greg Leisz, steel guitar, are members of Charles Lloyd’s band.  This created a sound you do not expect at a jazz concert. It certainly bought a smile to the saxophonist accompanying them on stage.

“Still Dreaming” as the concert of Joshua Redman was announced, refers to “Old and New Dreams” that made Joshua’s father Dewey Redman, also a tenor saxophonist, famous in the seventies. His son is a worthy successor.

For me, it is naturally to internally compare Joshua Redman and Charles Lloyd. They play one after the other on the main stage. Both tenor saxophonists of major standing.  Nevertheless, is it fair or meaningful to compare them? Redman is 48 years and Lloyd 79. They are musicians with the same purpose, though. The art of the one is no less than the art of the other. Felt privileged to witness them back-to-back on the same stage.

The concert of Matthew Herbert’s Brexit Big Band is hilarious, but at the same time, there is a clear message: the best comes through collaboration. Whether it is a concert or solving national, European or global problems, you just can’t do it on your own. English humour and a great playing band provide a nice mix. The Dutch Brexit Choir has a role in the project (collaboration). And the public is also involved. Matthew Herbert makes recordings of sounds that the public is asked to make. The recordings immediately become part of the concert via computers (collaboration!). 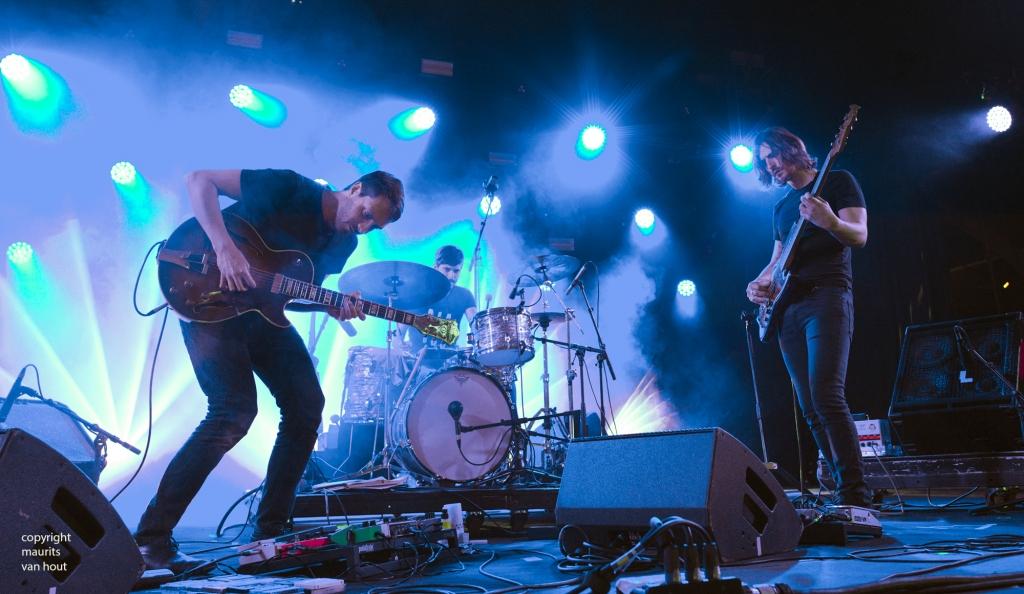 Artist in Residence Mark Guiliana today performs with his trio Beat Music. Keyboardist Jason Lindner, who says that working with a synthesizer, can evoke a psychedelic effect, during a Jazz Talk with Ashley Kahn. It has not come to me, but the concert was more than interesting. Giuliana, Lindner, and bassist Chris Morrissey use beats to improvise. Two members of Giuliana’s quartet also come on stage: pianist Fabian Almazan and saxophonist Jason Rigby. Fantastic !

Bill Frisell is somewhat like an Artist in Residence as well. Yesterday he played with Charles Lloyd. Today he joins the Belgian singer Chantal Acda. Tomorrow he performs with his own group (John Lennon compositions).

On the Club Stage, the singer and guitarist (as she was announced) and voice artist (my addition) show different projects: a duo with Frisell, a performance with a male choir (sometimes seemed Byzantine), joining in a free jazz setting and finally a mix of everything. What a nerve!

The Cinematic Orchestra is the attraction of the day. Much of the (young) public came especially for the British band. They perform after Matthew Herbert and my head is still in a political mood.

Bill Frisell does a program of John Lennon compositions: a sauce of Americana of famous songs of the Beatles. It is nicely played, but rather tame.

Tony Allen pays tribute to Art Blakey, but the King of the Afrobeat shows little energy. Which is in contrast with concerts by Blakey: they were very, very dynamic.

Concert number three is the Mingus Big Band. Its drummer is Jonathan Blake. He sure has the Blakey-energy. The Mingus Big Band is one of the best orchestras in the world ( a fan!). Charles Mingus music deserves to be kept alive. The highlight is the solo of tenor saxophonist Wayne Escoffery in “Goodbye Pork Pie Hat”, Mingus’ tribute to Lester Young.

Pianist Randy Weston is in Antwerp with a tribute to Thelonious Sphere Monk. The High Priest of Bebop was born a hundred years ago (he died in 1982). Randy Weston is now 91 years old and a living monument in jazz. The show is a mix of music and lecture to the audience. The masters of jazz, especially Louis Armstrong and Duke Ellington, used European instruments in a way that was never done before. That makes them and their music unique. Ellington’s composition “It don’t mean a thing if it ain’t got that swing” are African rhythms.” The compositions of Thelonious Monk are too. The evidence of this comes resounding from the stage.

The last time Mark Guiliana is on the stage. He performs with three students from the Royal Conservatory of Antwerp. It amazes me every year that students have such a high level. They rehearse a few days with a famous teacher and what follows is a successful concert. That’s a tradition at Jazz Middelheim. Before the concert Mark Guiliana does a blindfold test at the Stage Club, hosted by Ashley Kahn. The drummer talks about at the work of colleagues and why they influenced him. Very educational. 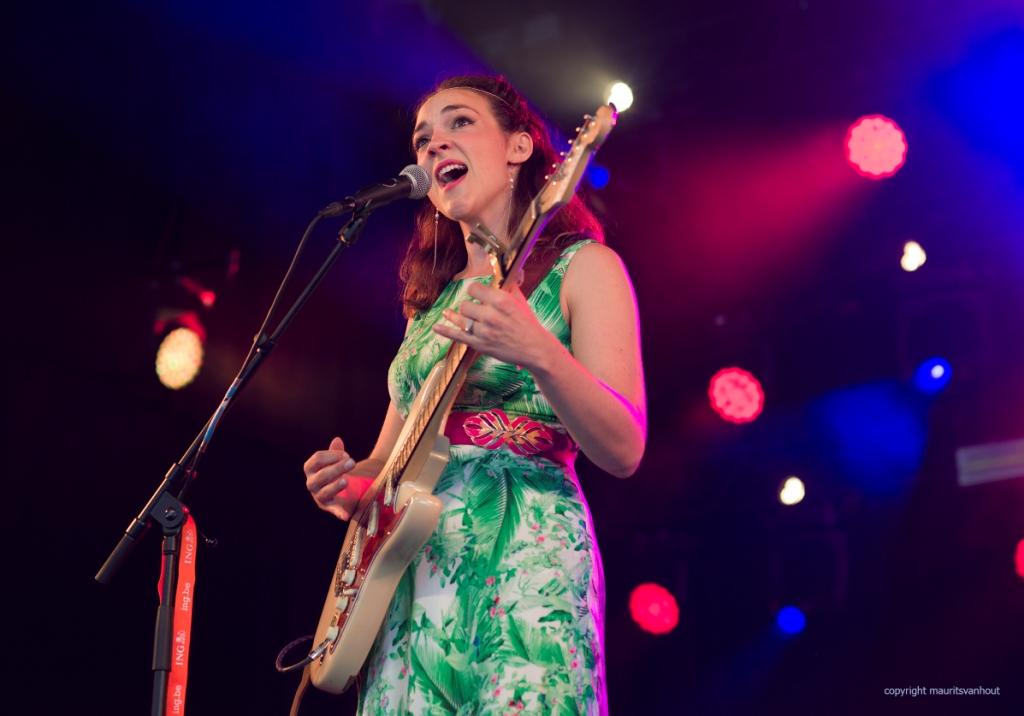 Becca Stevens is a new star in the making. In reviews from other festivals in Europe, she is praised. The new Joni Mitchell is cautiously suggested. Winner of Down Beat’s “Best Rising Star Female Vocalist 2017”. The singer and guitarist feel at home on stage and the audience is her guests. There’s lots of folk music vibe in her music. She is not a traditional jazz singer, but sure she can sing (and play the guitar) and lead a (very good) band.

The concert of Dance Dance  is a surprise. The Belgian band can be best described as The Shadows 2.0. The backing band for Cliff Richards had a special sound. This Belgian trio really captures that original sound at the beginning of a song. They soon start building a wall of jazzy bricks. Becoming annoying to the extent that I need my earplugs.

Van Morrison concludes Jazz Middelheim 2017. And of course, the concert ends with “Gloria”. So I was told by two Dutch fans, which sit next to me and give me a Morrisson-lecture just before the show. One has attended 33 concerts of “Van the Man”. The other fan has managed to hits 48 performances!

So, I took as true from these fans that each concert ends with “Gloria”. I also now know that the band extends that number as the singer, saxophonist and harmonica player has left the stage. He is already on his way to the hotel in a taxi when the music stops. I also now know that the quality of a performance is highly dependent on the mood of Van Morrison. In addition, the set list of every concert is different, except the last tune, of course. 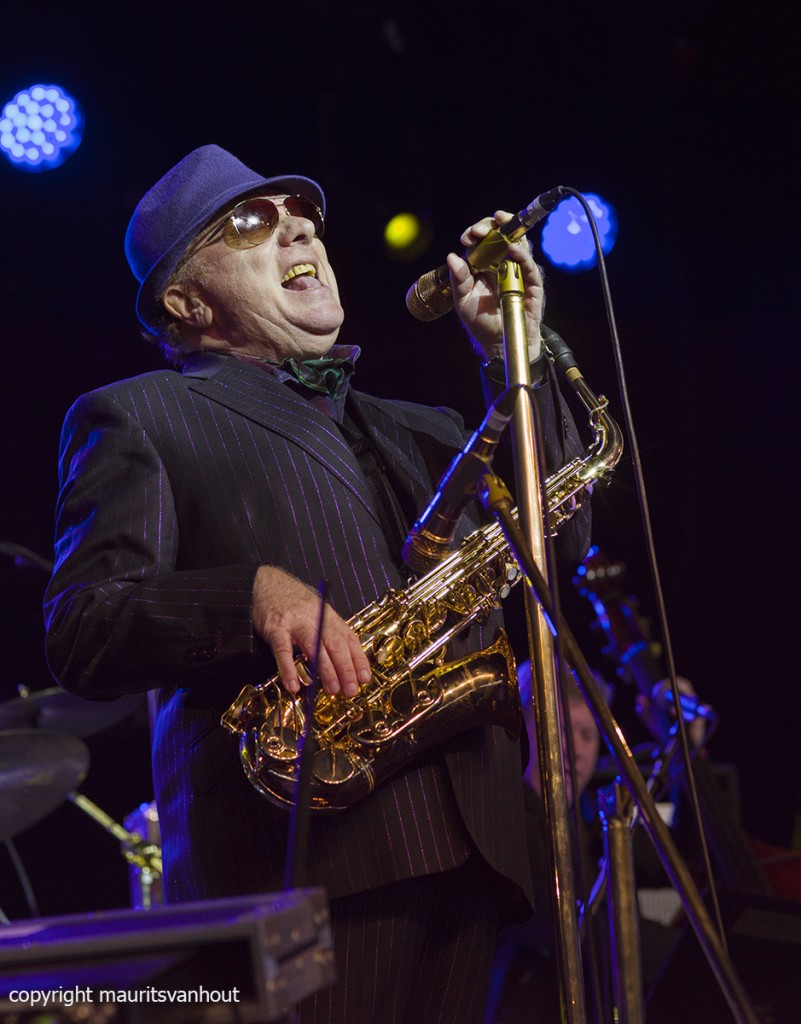 Van Morrison’s mood is okay in Antwerp. His concert is like a party with some 6000 partygoers.