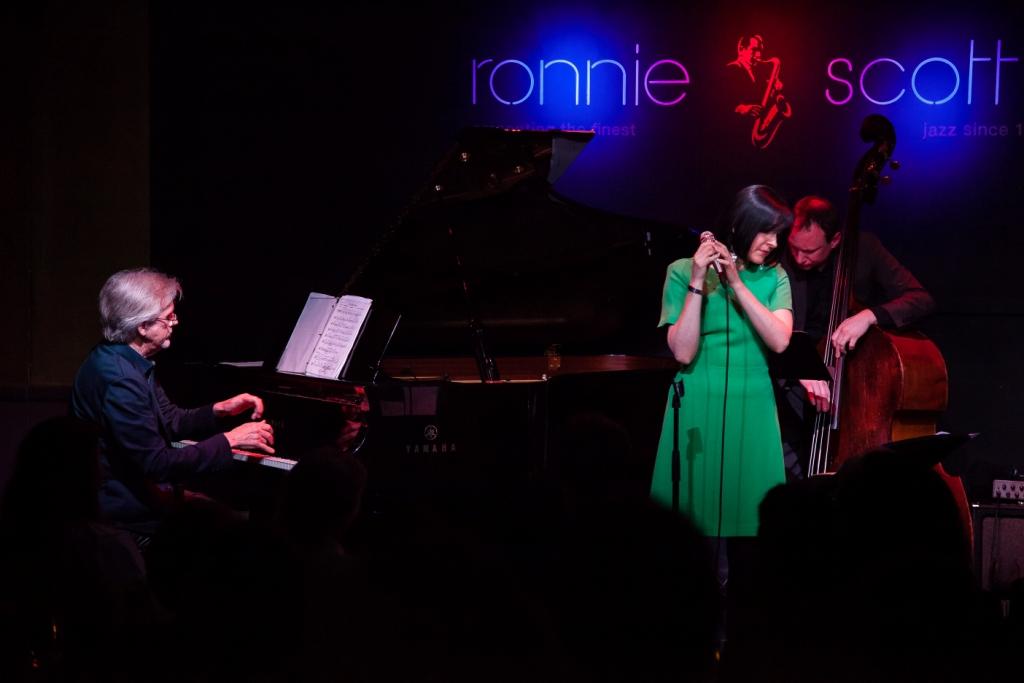 A debut for vocalist and lyricist Georgia Mancio and award winning jazz pianist, composer and arranger Alan Broadbent, playing to a sold out audience on Monday night recently, an emotional journey of over 2 hours, a stunning repertoire of music and lyrics put together by the super duo that is Mancio and Broadbent accompanied by Oli Hayhurst (who has played with Pharaoh Sanders, Ray Gelato, Julian Siegel) on double bass and Dave Ohm on drums (Gregory Porter, Ian Shaw, Anthony Strong).

Georgia Mancio steps on stage with a beautifully elegant grass green dress, simply attired, voice fresh and sensuous, she captures the crowd from the first note. The show aptly opens with “The Journey Home”, a real tour-de-force of remembrance and growth, with solos by Broadbent which give the audience a real taste of the great show that is ahead on the night.

On “The Last Goodbye”, Georgia Mancio is impeccable with tones that are tender and ever so light, the music was originally conceived for Charlie Haden’s Quartet West, Mancio’s lyrics are heart piercing, a song of loss and life moving on, this is possibly one of the best performances I have seen this year.

“Someone’s sun” shakes the crowd gently with its sambaesque mood, but with very relevant lyrics that we all should note down for the sake of living a better life! Mancio looks happy and very much at ease, looking over, from time to time, towards Broadbent who is simply masterful in his playing solos after solos with such panache. When “Cherry Tree” is played, unequivocally the perfect piece melody and lyrics wise, Alan Broadbent’s playing leads this composition and makes it a song that will be played over and over once the album is released!

A brand new song called “Same old moon” is a piece that leads toward the end of the 1st set, highlighting once  more, Mancio’s talent as a lyricist, together with Dave Ohm, who on the night alternates his drums sticks with brushes, too, making his playing soft, imperceptible at times, but oh so right!  The fast tempo of the last piece before the interval, is, again, written with precision and given an underlying political theme when we hear Mancio singing about “the clowns leading the parade”.

As the second set starts, Mancio and Broadbent’s brilliance is shining through, what I love about Mancio is her effortless soaring notes together with soft ones, making it impossible not to fall in love with her voice.

There are anecdotes and memories from their own careers and personal lives, but what touches most is the way Alan Broadbent speaks at times, narrating about a particular song for example, his voice is together timid and humble.  This great pianist will be 70 on the day that “Songbook” is released, what a great way of celebrating!

“Forever” a song about old age or should we says, growing old, where the lyrics are, once again, a driving force: so many of us recognizing how life changes us as we grow older.

“One for Bud”, another great creation by Broadbent, made even more outstanding by Mancio’s lyrics, takes us on towards the end of the show, with a faster beat.

“Where the soft winds blow” closes the show, this is an arrangement that Broadbent had composed when he was 17 years old, but that still sounds amazingly fresh today.

There is a little interlude where Mancio tells the audience about her discovery of the great American jazz singer Irene Kral, falling more and more in love with jazz and even working at Ronnie Scott’s many years ago as a waitress.  Her elegant performance on the stage of the iconic Ronnie Scott’s, selling out as a main act, is a magnificent example of strength and talent.

“Just like a child” closes the show, but it is with the encore dedicated to her late father and also her father-in-law, the recently departed Peter Vaughan, that my tears started coming down, “…these are the memories I will always keep, so go to sleep, dear father…’

Editors note: On Saturday April 15th come back and read: