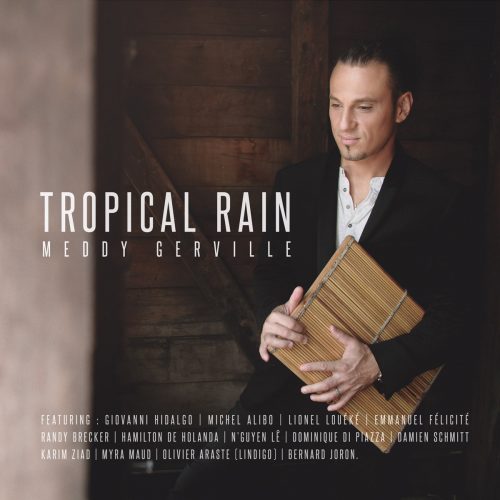 Hailing from the Réunion Island, Meddy Gerville has built a strong reputation both in Europe and USA for his unique blend of latin jazz fusion and his native Maloya (one of the two major music genres of Réunion).

During his career Meddy has built an impressive discography and his latest release “Tropical Rain” is a strong addition. Featuring an all star line-up including, guitarists Lionel Loueke and Nguyên Lé, Percussionist Giovanni Hidalgo, Bassist Michel Alibo and Trumpeter Randy Brecker the album consists of twelve original compositions by Gerville along with a reworking of the Charles Aznavour classic “La Bohéme”.

Tropical Rain, grooves from the first note with stellar performances from this all-star line up providing a strong base for Gerville’s aptivating vocals (sung largely in Réunion Creole). Gerville’s voice has often been compared to Milton Nascimento and Al Jarreau; however I find this description poorly lacking. In my opinion Gerville has developed a unique sound void of comparison. While often rhythmically complex Tropical Rain is at no time contrived and transcends the boundaries of style. Stand out tracks include the Latin Fusion “Bab Marakech”, the traditional “Pot Pourri Maloya” and Gerville’s arrangement of “La Bohéme” featuring guest vocalist Bernard Joron.

Of special note is “Camila”, a track, written for Gerville’s daughter. Camila differs stylistically from the rest of the tracks on the album.  Featuring a vocal sung in Creole and accompanied by Gerville on Piano with Marc Berthoumieux on accordion, this traditional waltz is captivating from start to finish.

Tropical Rain is an album that defies pigeon holing and in my opinion, a must have album for lovers of Latin fusion music. Highly recommended.