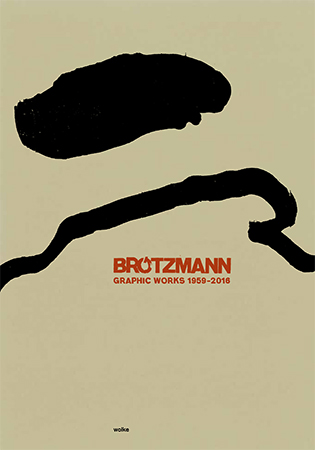 Peter Brotzmann sent me a copy of his book ‘Graphic Works 1959-2016’ a little while ago and it has sat on my desk for a couple of months. Not because I was not interested but because I was, yet I knew this was a book I needed to find time for, to allow myself to be engrossed in to understand this musician and artist.

Because he is both – Peter Brotzmann is a consummate musician but also an artist and an intensely emotive human being. We have talked together and written articles and been in contact by emails and telephone. He takes no offence if I let him know he sounds grumpy and sends me CDs and books because he knows I enjoy understanding the music, and with Peter, the art is as much an intrinsic part of that journey as the music. I have interviewed him and he has given me quotes for my book. I have watched as he loses himself in his playing, listening intently to those playing with him, yet also managing to take up his own completely separate place on the stage. Peter Brotzmann is one of the most interesting people I have met because he has lived through many experiences. His book, ‘We thought We Could Change The World’ written with Gerard Rouy (Wolfe Verelag Hoffheim) in 2014 – consisted of conversations with his writer and friend, documenting Peter’s life from childhood to the recent past and told of momentous world events and their effect on Peter and also events which were not momentous to others but nonetheless had a marked effect on Peter as a young man. In our conversations he has touched upon subjects like the Vietnam war, the effect rebellion and conflict has had on music, his experiences in Holland as a German after the war and the lasting effects and some more private things but there are events which have formed and shaped him both as a musician and artist.

So, I approached this book with some knowledge of the man but still I was educated and informed with the reading, about personal rites of passage but also how the art reflects how a person reacts to life events and changes over a life time.

Peter’s art, which appeared on sleeves and poster work, could be said to have been – and still is- as much a conceptualisation of free and improvised music as the music itself and forged strong bonds between the expression in the music and that on paper. Always seeking to give an essence of the music itself his works range from strong linear pieces to simple placements of objects on top of each other, in an order which only becomes apparent when you hear the music. As his music has changed over time, so has his art and there is a development and alteration which implodes and explodes with his inner emotional state over time and which gets is translated inexorably into his art.

The book itself has images from different times, each preceded by a brief introduction or discussion from people including David Keenan, Jost Gebers, Gerard Rouy,Lasse Marhaug, John Corbett and Karl Lippegaus, mostly concentrating on the way Peter works on his art but also about the man himself.

The pictures themselves range from stark, simple, block printing – a simple numerical chart opposite letters of the alphabet for example, to ghostly shapes and pencil sketches with sharply defined lines. Circles feature heavily as do shapes within those circles. Some of the posters show musicians, either posing or at work, deeply entrenched in what they are doing and a few verge on the borders of vulgarity.  In one poster the curve of the sax dips towards a gigantic phallus dropping centrally from the figure holding it, on another a female leaves little to the imagination but he stops short of the obscene- just.  Many of the images are strong, others not so but they are nearly all distinguished by firm thoughts, the lines not random but placed, thought out and clearly put. There is room for names, words and ideas on some of the posters and they are clear once you look, but you have to look – and that is the point.  This book, even though it has little narrative in terms of volume , I think is more Peter Brotzmann than anything else I have read because the art work is what emerges from the mind; the physical evidence of thoughts and ideas of what happens inside – and it is  interesting because of that. Peter is not untrained, he began his professional life as a visual artist and  was involved in the international network of artists known as the Fluxus movement. Yet he was disillusioned with the art world, exhibitions and shows and turned to music but has never stopped being also an artist.

This book is not a journey, there is no arc of development or linear change as such even though there are changes within periods but the changes are often reversed and never continue in a linear development. Rather, it shows the perfectionist, the detail Peter sees and puts into the pictures, the essence of items he captures and makes them so much more than they already are. Gritty, full of the tiny minutiae, sometimes expanded into giant notes, keys, misshapen saxes, or landscapes created from three simple colours, or just a hole in a block of black. There is no journey because this is simply the expression of a gift he has. You can see anger, gentleness and an inexorable drawing to the unexplained but you cannot see time in the pictures. Those towards the more recent bear strong resemblance in essence , if not in context, to those at the beginning so this is not a book of the artists’ developing in art over time. It is a book about Peter’s life, shaped, formed and spoken as clearly as if he were to sit down and dictate it word for word. Some of it is tasteful, some not, some sharp and wiry, some gentle, like a caress, some feels dangerous whilst other pieces feel like they just tell what it is. But every time you open the book and look again, you discover more.  Almost perfect. To understand Peter Brotzmann you need to listen to his music but also listen to his art because both speak volumes.

For more information about Peter Brotzmann