George Wein -The Life of a Legend 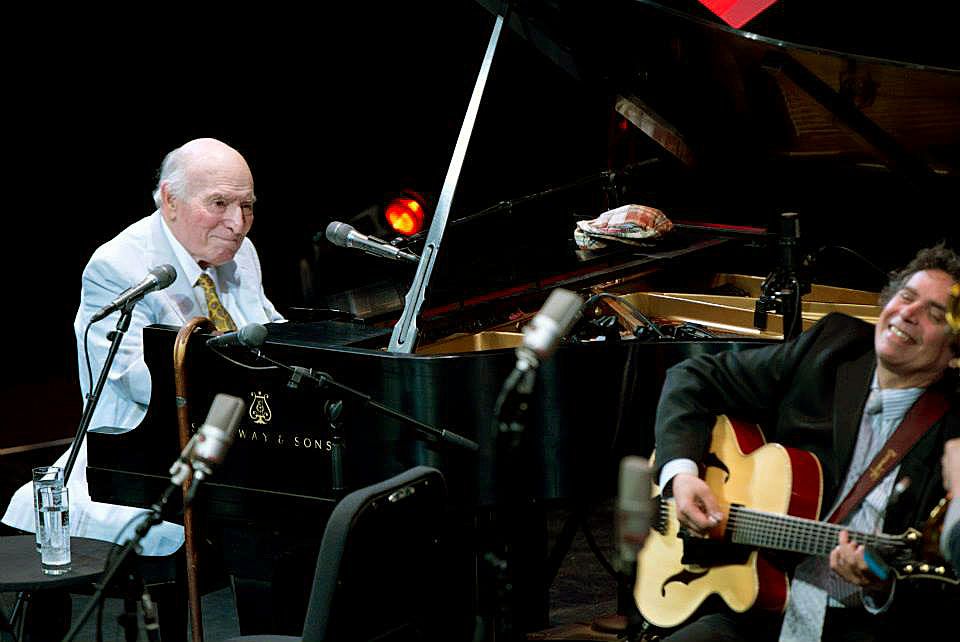 George Wein is a living legend. The jazz impresario is the “father of jazz festivals” having launched the Newport Jazz Festival in 1954. This October 3rd, George Wein celebrated his 91st birthday. Scott Thompson had a chance to catch up with George Wein at a previous birthday bash in The Allen Room (now called The Appel Room) at Jazz at Lincoln Center. Read this fascinating account of what George shared with Scott.

“I have played with some of the greatest musicians of jazz over the years.  We put this band together and it’s really an all-star band.  I gotta play with good musicians to keep my chops together.

There’s  going to be a lot of surprises for me at this gig.  During the show, [New York Times jazz writer] Nate Chinen and I are going to discuss highlights of my 66 years or so of being a promoter,” says Wein. “I don’t perform a lot but I always get the best musicians possible.  Without good musicians, I don’t  sound good.  If they’re good, I sound good,” he says with a smile. “My piano playing is my relaxation.  I have to work at it.  I have the best of both worlds: I can be a promoter and not be tied down as a musician looking for a gig, but then I can still play and enjoy myself.

When I was 13 or 14 years old, I was studying jazz piano.  I used to sing when I was a kid and I wanted to learn how to play popular music.  I first studied classical music when I was seven years old.  Then I heard music where people would improvise and I was fascinated.  I had my own band with four saxophones and three trumpets and three trombones, bass, piano, guitar…I got all the kids in the neighborhood together.  I got the bug and I’ve been involved in it ever since.”

While Wein  is best known for the Newport Jazz Festival, in 1966 he opened a jazz club in Boston called Storyville.  He explains, “Some people from Newport came to see me at Storyville, when I had my club and invited me to Newport and I came up with the idea of doing a festival.  My inspiration was Tanglewood.  If they had a classical festival in Tanglewood, why couldn’t I have a jazz festival in Newport?

We have had every major living artist since 1954 at Newport.  The only ones we missed, because they died between ’54 and ’55, were Charlie Parker and Art Tatum.  They died when I was preparing to bring them up there. I still pick all the artists for the jazz festival.  We get the best we can get!  We have a mission to present younger, emerging artists in addition to the veterans.  We have many younger jazz artists that the world doesn’t know about.  If we don’t get new people, the music is going to die.”

As the story goes, Wein even dabbled in bringing rock acts to Newport.  “I think it was 1969 when I had Sly Stone at Newport.  It was then I realized I couldn’t really have rock musicians there.  That’s when I made the decision of my life not to be a rock promoter because I couldn’t control the artists.  I had a lot of pride in my festivals.  When working with rock artists, you’re just working for them – you might have made a lot of money, but you couldn’t control them.”

Today, the Newport Jazz Festival continues to flourish.  Wein is encouraged with the progress that jazz music has made.  “The word ‘jazz’ is bigger than ever.  Many people in the jazz clubs are tourists.  The jazz festival is starting to come back.  In just one year,  we’ve grown 25% from last year.  I am very pleased with what is happening with jazz right now.”

Wein is also a Jazz at Lincoln Center board member.  He sings high praises to the organization’s commitment to jazz.  “I think JALC is a tremendous help, because they’re promoting the word ‘jazz.’  To see world-class jazz in Columbus Circle and the younger people in the jazz club…it’s working. I think they’re doing a tremendous job.  Wynton [Marsalis] is one of my closest friends.  We’ve been talking about many different ideas of how we can work together in the future.  We talk all the time.”

Count Basie, Miles Davis, Dizzy Gillespie, Charles Mingus…” I knew them all and they knew me.  I am very grateful for my life,” Wein humbly admits.  But of all the jazz greats he worked with, Duke Ellington stands atop the heap. “Memories of Duke Ellington are very important to me.  We became very good friends.  I presented him all over the world.  He was an inspiration on my approach to music.  Duke wrote his own music.  Everything he did was his own thing, but at the same time, he communicated his music to people that affected their lives.  That is what a great artist has to do.  Miles did that his way, in a different way.  Duke did it all his life, Miles did it for a period in his life when he put a mute in his horn in the 1960s.  Duke did it in the 1920s until he died in the 1970s.  He never stopped writing music.  Wynton is the closest thing to Duke right now. “

Looking back on his colorful life, Wein expresses gratitude.   “Everything is important, but to me the most important thing is that I’m still doing it,” he chuckles.  “I never had a job.  I’ve always been my own man.  Never sold out, per se,  I’ve done things to make a dollar here and there, but I’ve never sold out my principles.  I loved the music back then and I still love it now.”

Thompson served as Assistant Director of Public Relations for Jazz at Lincoln Center in New York for almost a decade. With a background in broadcast journalism, Thompson’s voice and work  has been heard on the Associated Press Radio Network, the Mutual Broadcasting network and NBC-AM New York, on The Morning Show. His experience spans radio, television, print and the internet. Thompson co-produced the New Haven Jazz Festival from 1994-2000.