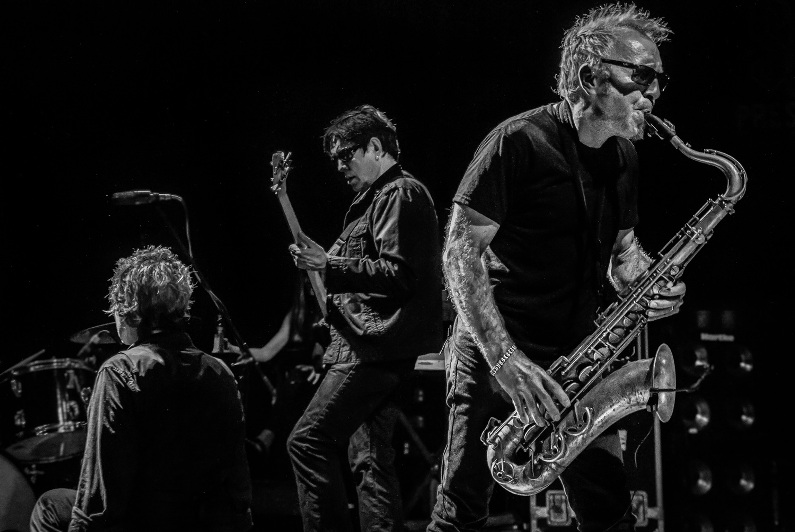 From Free jazz to New wave, progressive pop & Post-Punk, Funk then back to Free and Beyond – Mars Williams & Switchback tours for their new release.

The Chicago-based free jazz saxophonist Mars Williams may be one of the most versatile players on the scene, and a full-fledged veteran. He’s been around, but not so much on the traditional jazz scene.

He was the saxophonist on the Waitresses debut album in 1982, at the peak of the new wave scene. Their hit? “I Know What Boys Want.” Then Mars was there in 1983 to record on Billy Idol’s album “Rebel Yell.” And when the British post-punk group Psychedelic Furs needed to replace their original saxophonist, they called Mars to join them in the mid 80s, and he is still with them. After a three-week summer tour across the USA, the Furs will begin another tour opening in New Orleans in mid October.

Meanwhile, this gives Mars just enough time for a short European tour with one of his many improv/ free jazz units, Switchback, with New Yorker Hilliard Greene on double bass and bass ukulele, and two highly accomplished and more experimental European players: Waclaw Zimpel, from Warsaw, on clarinet, bass clarinets, tarogato and flutes, and Klaus Kugel, from Cologne, on drums and percussion.

Switchback is a contemplative explosion of sound, and obviously, the quartet is nothing like the more popular groups Mars plays with (or has played with); but on a closer listen, Mars has embraced experimental and free jazz since the start of his career and he’s taken this along his entire journey.

“I was always playing all kinds of music, and in the Waitresses I played with a lot of experimental percussion, making sounds like the Art Ensemble of Chicago does. I played with Zorn back in the early New York scene, but also I played rock and I always liked to put that into different styles,” says Mars.

On “Jimmy Tomorrow,” from the Waitresses’ debut, Mars blows as free as Ornette or Dolphy. And the guitarist, Chris Butler, is picking away like Marc Ribot, for a great moment in 80s progressive pop.

“It was a perfect time in music history of what was going on in New York City, that let me go into a pop band, but it was progressive pop. It was a new punk scene in the mid 70s, and there was New Wave and the jazz scene all came together, so everyone was hanging out together. One night there was Ornette (Coleman—ed) hanging out and the next night Don Cherry was playing with a punk band on stage, and Joey Ramone would be there and Bill Laswell, etc. We were jamming together after hours, and all of a sudden, there was also this fusion of styles on all of the scenes, so you heard jazz on rock and punk songs, and punks with saxophones. It was the time when I entered the scene, and I had the freedom to play whatever I wanted to play,” he says.

Growing up in Chicago, Mars also had the chance to catch the leading players of AACM (Association for the Advancement of Creative Musicians) when he was very young, still a student of classical music.

“The first free jazz show I saw was definitely the AACM, and it was a show with Anthony Braxton with Dave Holland and George Lewis, or maybe it was the Art Ensemble of Chicago, or was it with Roscoe Mitchell” he says. “But Hal Russell was my biggest influence, then the founders of AACM.

In the late 70s, Hal Russell formed the NRG Ensemble and Mars was a core member of this free jazz, experimental unit of a master with much younger players, till Russell passed away in 1992. Mars’s own various free jazz groups including Switchback have been part of his musical journey since this time.

Switchback was formed two years ago, and this tour is to promote their new release, “Live in Ukraine,” which was recorded during their last tour.

Switchback or any of his other improv/free jazz units like Scorch Trio, Full Blast, or Boneshaker would seem to be a clean break musically, for Mars, after the Psychedelic Furs tours, but he clearly disagrees.

“With the Furs, they let me play free. They give me the roaming time, and I am running around on stage, being Butler’s foe. I’m taking screaming jazz solos on “India” and on other tracks,” he says.

“But with Switchback, the most gratifying part is being able to play with amazing improvisers and musicians. Playing with musicians from all over the world, since they have all played in different types of groups, just like I have, but so different,” he says.

“For instance, Zempel goes to India and he lives and studies there with Indian musicians, and he brings that to the music. Klaus Kugel has been playing free jazz for such a long time, and then Hillard Greene brings a classical and jazz background. He just plays so beautifully,” he says.

“Sometimes they tell me, Mars has got to make up his mind, and play only rock or jazz!” he says, reflecting on his seemingly schizophrenic combination of groups. “But this mix of genres defines me, so that I can use tools from these other genres, cause if I’m stuck in only one, I’m not satisfied. I like to get outside of my comfort zone,” he says.

Toward the end of our talk, Mars reminds me that he also leads the long-standing funky jazz group, Liquid Soul, and he has a psychedelic jazz group, called Extraordinary Popular Delusions.

“I’m probably one of the most open-minded musicians out there,” says Mars.