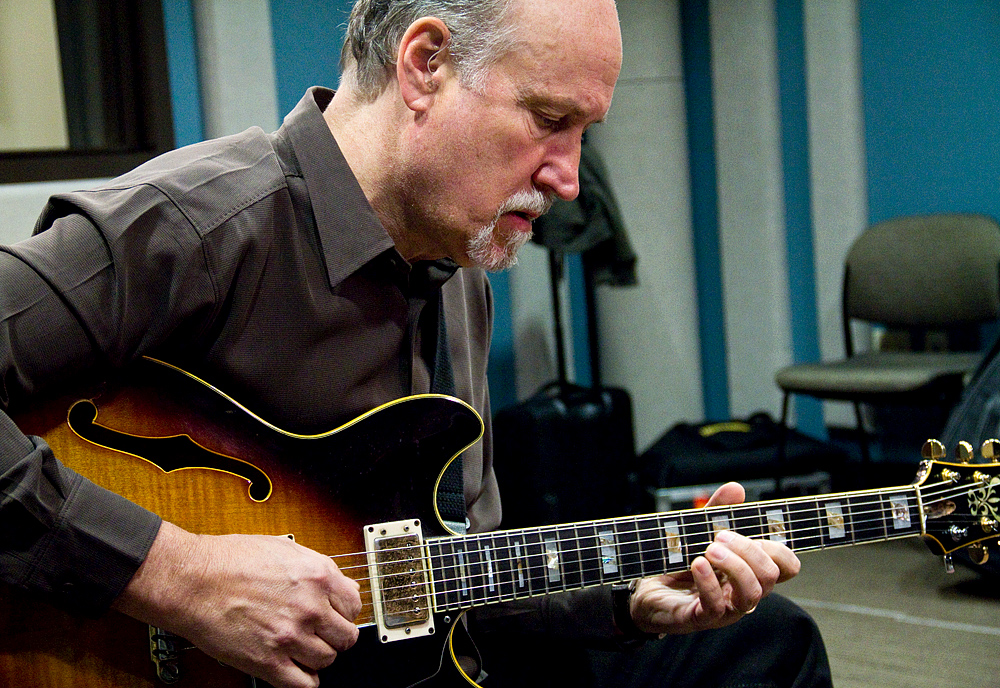 Scott Thompson spoke with John Scofield during the Jazz at Lincoln Center’s Muddy Waters Celebration. Scott asked John a number of questions, and this is what John had to say:

Mainly, I’ve been a big fan of his music since I started out… in the ‘60s when I listened to more blues before jazz, I tried to play blues guitar.  I had Muddy’s records because it was unavoidable if you were a blues fan, you hear about Muddy Waters.  So I bought his Chess records and I got to go hear back in the ‘60’s at a club on Bleecker Street called the Café Go Go and they had this thing called “The Blues Bag”, but it was like a amazing festival where they had like eight bands; I heard Muddy, B.B. King, Jimmy Reed, Big Joe Williams, the Blues Project and the Paul Butterfield Blues Band… all in the same night!  It was a little club.  I heard Muddy on other occasions too.  Just loved his music.  The band he had a the Café Go Go was with Otis Span and James Cotton… Chicago Blues, he wrote the book… he and Howlin’ Wolf.

Muddy was known for his great vocals.  He always had another guitar.  Like B.B. King was a jazz-influenced virtuoso blues player.  Muddy Waters was like a contemporary Robert Johnson.  It was his overall effect, his voice, his band, with Otis Span on piano, James Cotton on harmonica…it was the whole feel.

Blues, jazz…the labels that we use are limited.  They don’t really tell us what’s going on in the music.  Blues feeling and blues music is a part of jazz.  Jazz wouldn’t be jazz without it.  Those Chicago blues guys were really influenced by jazz, including Muddy Waters.  You can hear jazz in his music.  It’s all related.

Taj and I are playing together.  Taj is choosing the band.  I’ve been a fan of Taj’s for many years.  The first time I got to play with him was about two years ago at the Hollywood Bowl, at a Lee Ritenour guitar festival.  They had a bunch of guitarists.  Part of it was a blues segment with Taj and I got to play with him on that.  It was great.

I play jazz and there are many branches on the tree.

I saw Hendrix at Hunter College in New York City…and uh…WOW!!  He was a blues player.  But that was just an extension of blues and rhythm & blues and he was from that cut.  He played with the Isley Brothers and on the R & B scene, but he was really influenced by B.B. and Albert King and the blues guitar tradition.  I see Jimi as an extension of that whole thing.  He was somebody that took that and went somewhere else with it.  I wish he had lived more than 27 years!