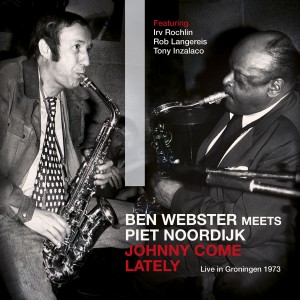 The famous tenor saxophonist Ben Webster died on September 20, 1973 in Amsterdam. The American lived the latter part of his life in Netherlands and Denmark. There is now a live cd with music from the last period of his life: Ben Webster meets Piet Noordijk – Johnny Come Lately.

Shortly after his death, an LP was published with the last concert of the saxophonist. This was recorded in De Twee Spieghels in Leiden. A visitor to the concert in that Dutch city had a cassette recorder with him and recorded the gig. When Ben Webster died a short time later, the concert was released. The sound quality was far from good, but it was  perhaps the last and a potential historical monument of one of the truly great saxophonists of the last century.

Our CD review by Ben Webster was also recorded in 1973. A Dutch radio station made a radio broadcast on 2 February of that year from a concert in De Koffer in Groningen. The sound quality of Ben Webster meets Piet Noordijk – Johnny Come Lately is much better than the recording made in Leiden. And the concert much more spectacular.

Although Ben Webster (1909-1973) by now his deteriorating health made most of his latter performances sound mostly routine, the Groningen concert is known to be spectacular. This saxophone maestro gave us one last unmatched demonstration of his beautiful ballad playing and his wonderful growling fast numbers.

Alto saxophonist Piet Noordijk already had played a gig in the city and he decided to challenge Ben Webster in De Koffer. That resulted in a spectacular concert, with the two saxophonists chasing and stimulating each other. Pianist Irv Rochlin, bassist Rob Langereis and drummer Tony Inzalaco had to make overtime.

Piet Noordijk (1932-2011) was the most famous Dutch alto saxophonist. He played bebop as well as avant garde and free jazz. For a long time, he was a member of the famous Metropole Orchestra. In 1987 he received a Bird Award at the North Sea Jazz Festival. Saxophonist Benny Carter and bassist Niels-Henning Orsted Pedersen where also honored at this famous festival.

Ben Webster, Coleman Hawkins and Lester Young are the most important tenor saxophonists of the swing period. In 1940 Ben Webster started as a soloist in the orchestra of Duke Ellington. Three years later he left the orchestra. His fame was now established. Elements of his playing and sound can be found via Archie Shepp, Lew Tabackin, Scott Hamilton, David Murray and Bennie Wallace. In 1965 he settled in Europe.

It is fortunate that the soundtrack of the broadcast has been preserved. The cd is published by the Dutch Jazz Archive. The organization has been active for some thirty years now and publishes CDs of legendary jazz concerts in Netherlands. (www.jazzarchief.nl)

Video: ‘I got it bad and that ain’t good’ by Duke Ellington (1941).
Ben webster & Duke Ellington at the Newport Jazz Festival 1971 in “Tivoli gardens”, Copenhagen.
© Danmarks Radio