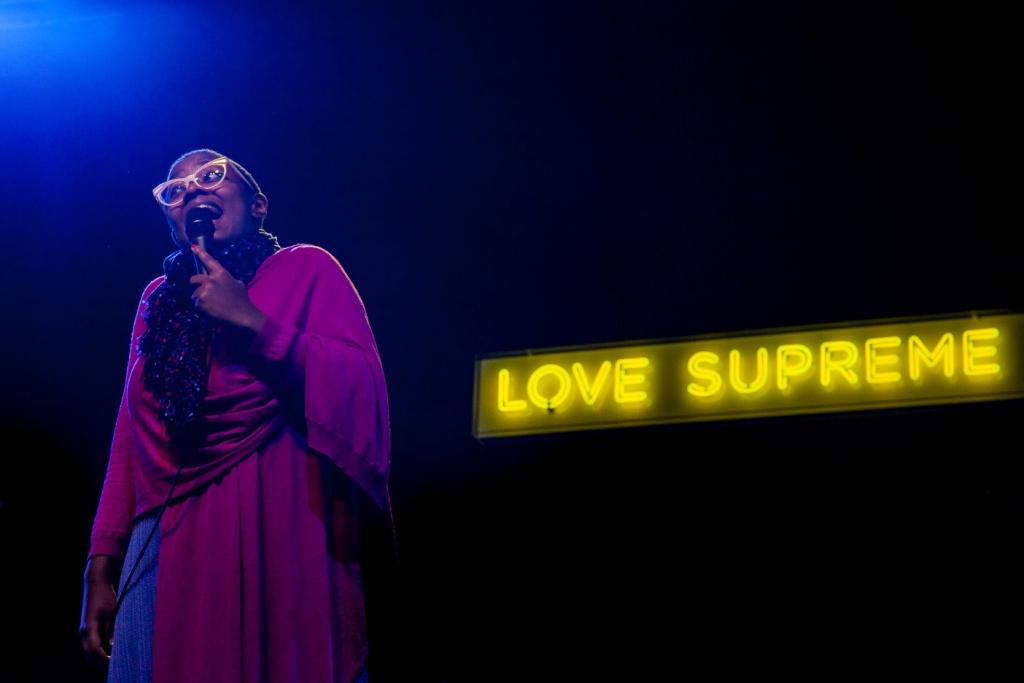 I have always thought it would be an intriguing challenge to report from a music festival, for the simple reason that these are, normally, very busy places to be at with no time to think.

Little did I know The Love Supreme Festival was going to be far worse (but in a good way) than that: incredibly busy, vibrant, diverse, beautiful!

So here follows my réportage of one of the most popular music festival this country has been able to offer in the last few years.

I would like to thank, at this stage, a few people that made my staying and reporting at the Festival possible: Nigel, my editor at Jazz in Europe, Carl, photographer and visionary extraordinaire, and the wonderful team at AirMTM.

Only two stages were open on the Friday 1st, The Arena and the lovely Band Stand. Glynde Place, with tents, shops and stands just getting ready to open, was a hectic amalgam of people, technicians, artists, press, pr.  It had a good vibe to it, and one could clearly sense it was going to be an unforgettable time.

The Arena was definitely the place that acted as a catalyst for me on the day; the line up being a mixture of new, funky music, but also of some huge bands.

Sumo Chief, a 4-piece band, offering strong drumming and bass sounds, with a hard and strong line evocative of influences from J Dilla and Robert Glasper for example.  Theirs is the kind of music where one would be forgiven for thinking of “leaving all your fears and preconceptions behind”!

But it is with the mighty Ezra Collective that my tracks stopped.  Sharing keys player, Joe Armon Jones, with the previous band, Sumo Chief, Ezra were an entity that stood out a mile.  With a big following, the crowd were ready to enjoy the music which had a massive sound, that of drummer and leader Femi Koleoso, its infection rhythm, together with James Mollison’s sax and Dylan Jones’s slick trumpet playing put Ezra Collective very high up on the estimation and appreciation ladder.  The band played with a compact sound, and afro-beat, jazz, reggae, mixed with hip hop, one could hear notes from a Fela Kuti’s piece performed stylishly and uniquely.  45 mins of solid, brilliant innovative jazz.

Later that evening, this writer and fellow photographer, Carl Hyde rushed to the Rough Trade tent where the boys were signing their new EP “Chapter 7” and purchased a copy!  That copy is already wearing out, being played over and over!

On the second day of the Festival, things were hotting up, the sun dared shine (at times), although the wind and the clouds still made it chilly enough for everyone to still walk around in wellies and rain-jackets.

On the main stage, a diverse selection of music, from Riot Jazz Brass Band to Ibrahim Maalouf with Miss Grace Jones closing for the night in her utterly deliciously decadent style.  Loved her costumes, loved her artistry, loved her still powerful feline voice.

My pick of the day was indeed the innovative French Lebanese artist, Ibrahim Maalouf, his trumpet playing denotes creativity, knowledge and understanding of music on a deeper level.  His quarter tones allow the music to flow, to be perceived with a different ear.

Maalouf, born in Beirut and now residing in Paris, with an artistic background, his father was the famous trumpeter, Nassim Maalouf, who introduced the fourth valve on the instrument so to play the same way he was playing in the Arabic music.  Ibrahim’s father left Lebanon when he was 26.

The younger Ibrahim had expressed an interest to become an architect, being surrounded by all kinds of artistic people and experience, he would expect his family to stop him, but andnobody did and so his journey began.

Maalouf is also a teacher of improvisation in Paris.   I met Ibrahim in the Press Tent before he went on stage to ask him a few questions.

Interviewing Ibrahim was a great honour, he is a humble and talented musician, a “master of invention”.   Someone whose cultural background is a positive step into the future and whom can appreciate the wonders of diversity with all its levels of dark and light.  Listening to his 2015 album “Kalthoum” is just mind-blowing.  Ibrahim Maalouf looks at music as a vital part of life – everything is interconnected hence the importance of “exchanging ideas and cultures, finding the common point”.

We shall be looking forward to his next project, Indian Raga music and its rhythms.  An incredible ocean!

Saturday, of course, being the second day of the Festival, meant that crowd capacity had substantially grown, every little food outlet was busy (albeit some of the soaring prices) and all the different talents kept on coming…

At the Big Top tent, Mademoiselle Cécile McLorin Salvant showed yet again how utterly talented she was.   Aaron Diehl on piano with his dedicated and mesmeric piano playing could not fail to shine along such a star like Cécile.

The trio made out of John Scofield, Brad Mehldau and Mark Guiliana, again playing at the Big Top tent, were in top form, a combination made in jazz heaven.   In particular, Guiliana, his drumming was slick and full of passion.

Mehldau, an icon on keys and pairing separately with Guiliana also on more eclectic projects, showed the huge, squeezed crowd in the tent his inimitable playing.  His new album, released a few days ago, “Blues and Ballads” keeps up to expectations! Just like on the album, Mehldau, filled the air with attentive playing, eyes closed, his was a heart-felt motivation to give the audience something different and he didn’t let anyone down!  John Scofield, guitar hero, was impeccable.  A face full of meaningful concentration, a testament to an artist that’s come a long way, performing on the day as part of a trio, their music uniting old and new perfectly.

On Sunday, third and last day of the Festival, I and fellow photographer Carl, had the busiest day.  Four scheduled interviews as well as stage hopping with Carl, it was incredibly demanding, but an amazing day was had by all!

On the Main Stage, Ray Gelato and Claire Martin opened up the festivities for the day.   Theirs is a due that’s worked out very well, with a newly released album doing great, performing at Glynde Place was refreshing, good for the heart and outstanding: Mr Gelato never ever fails to deliver when playing live.   Their opening slot had all the  ingredients for a good mix of swing and jazz with a good dose of talent thrown in!

I caught up with Ray after their show, minus Ms Martin who had to escape promptly due to family commitments.  My interview with him will be published separately on this “space”, so keep reading!

Following a stupendous show by Avery Sunshine who demonstrated once again to a live audience one just needs a great voice and a good few players to give a spectacular show, the audience at the Main Stage was treated to yet another tremendous band: the everlasting Average White Band managed to pull most of the people present on site to their show.   It was their appeal and brilliant soul and funk sound that made that early afternoon atmosphere even more magic.

Alan Gorrie gave me some of his time separately before he went on stage so that I could ask some question on the band’s longevity and  a few other topics.  It was an honour to be to able to chat with an artist of such calibre and yet so down to earth.  My interview will be published separately on Jazz in Europe, in fact, it is fair to say that all my interviews will be published as such to be able to give our readers a more in-depth time on the Festival’s most memorable artists.

As The Love Supreme schedule description gave on its website, the Big Top tent was offering the “cream of international and UK jazz”.  This was a truthful and apt description to a super line-up for the Sunday.

For example, Femi Temowo and the Engines Orchestra, one of this country’s most innovative and talented jazz guitarist, his Nigerian origins combined with his subsequent living in South London from the age of 10, made Femi the extraordinary artist he is today.

Playing with the Engines Orchestra was just the cherry on the cake for this writer.   There was such fervent deep enthusiasm running whilst they played, Phil Meadows on sax shone bright and it is worth remembering that Femi’s new album, “The music is the feeling” – released recently is a must listen.   My interview with Femi will be published separately by JazzinEurope in the next weeks.

And then to close the show at the Big Top, there was him, the “gentle giant” as a colleague called him.   Indeed a giant, charisma, kindness, bravura all in the shape of Kamasi Washington.   His show was simply electric, resonating from all sides of the stage.

Moving from one stage to the other also meant realizing the sheer power of music, how this was making audiences quickly migrate from one venue to another to be able to get a decent view of their favourite artist.   I stopped often to watch the crowd, to me it is symptomatic of what people might like or be curious about during a Festival.

I asked a couple of friends what they were looking forward to seeing on the day, they immediately said Jacob Collier, to them he is new and inventive, but it was “Dem Ones” aka young dudes Binker & Moses that my feet and ears were more gravitating towards (Arena stage).  Playing also new material, their show was kaleidoscopic.  Moses’ rhythms paired with Binker’s piercing and intuitive saxophone playing were of an addictive kind of jazz, the good side of addictive, that is!

A worthy mention must go to a(nother) great saxophone player, Simon Spillett who took residency of the Band Stand to close the show on Sunday featuring pianist John Donaldson.

I have seen Simon play quite a few times now at different venues, he is always a catalyst.  Whenever and wherever Simon plays, the sound produced is strong, even when he is playing a ballad.  His show at the Love Supreme Festival was just that, a strong reminder of his experience and  formidable playing!

As they say, “and like all good things”, even this Festival had to come to an end.

Driving back to our London base, tired and rather sleep deprived, there was a common denominator that kept up smiling and discussing the music of the last 3 days: an impressive display of artistry, portrayed with skill, organization and diversity.