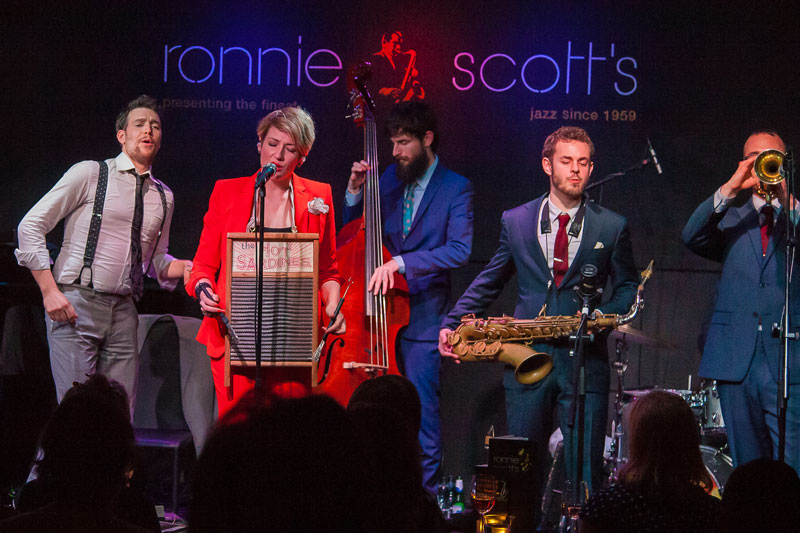 The Hot Sardines played Ronnie Scott’s last week with one debut show comprising of two shows (one at 7.30pm and the other at 10.15pm) and in between those, they even managed to eat a little something AND onto the BBC Radio 3 (check) for a live appearance.

Uhm, that’s an incredible amount of stuff to fit in half a day!

As the second show starts, “Miz Elizabeth” Bougerol, on vocals, explains to the crowd how busy they have been since arriving in London.  After a couple of great tracks, one of which is the beautiful “I love Paris” sung with just the right type of raucousness and a touch of zing, the audience is well and truly taken.  This is a band whose talent strikes a million chords with the audience and on the night of playing at Ronnie Scott’s, we are all in for a treat: re-living and listening to some originals and standards from last century all mixed with a vital ingredient: originality.

I had never experienced the Hot Sardines live until the night in question, so when a classic by Mamie Smith (a 1926 track) “Crazy with the Blues” is played, certain frissons make the hair stand up.   The Hot Sardines’ popularity is easy to understand: listening and witnessing one of Mamie Smith’s songs, for example, prove it: the band has talent a-plenty, which they know how to use mixing it with a faultless bravura and, at times, some cheeky numbers.

Evan “Bibs” Palazzo, pianist, formed the band  with Miz Elizabeth back in 2007, he was from a theatrical background and she was from a travel writing background.  An odd combo one might say, but amazing things come out of these sometime!

“It had to be you” the beautiful 1924 song written by Isham Jones (lyrics by Gus Kahn) is performed and arranged differently, originally, it is not just another early 1920’s songs, it almost becomes The Hot Sardines’ property.

For this writer, the picture of the band is complete when Edwin “Fast Eddy” Francisco is more prominent on some songs with his incredible tap dancing.  The Hot Sardines not only sing, arrange, write songs and play them, BUT they also know how to dance!