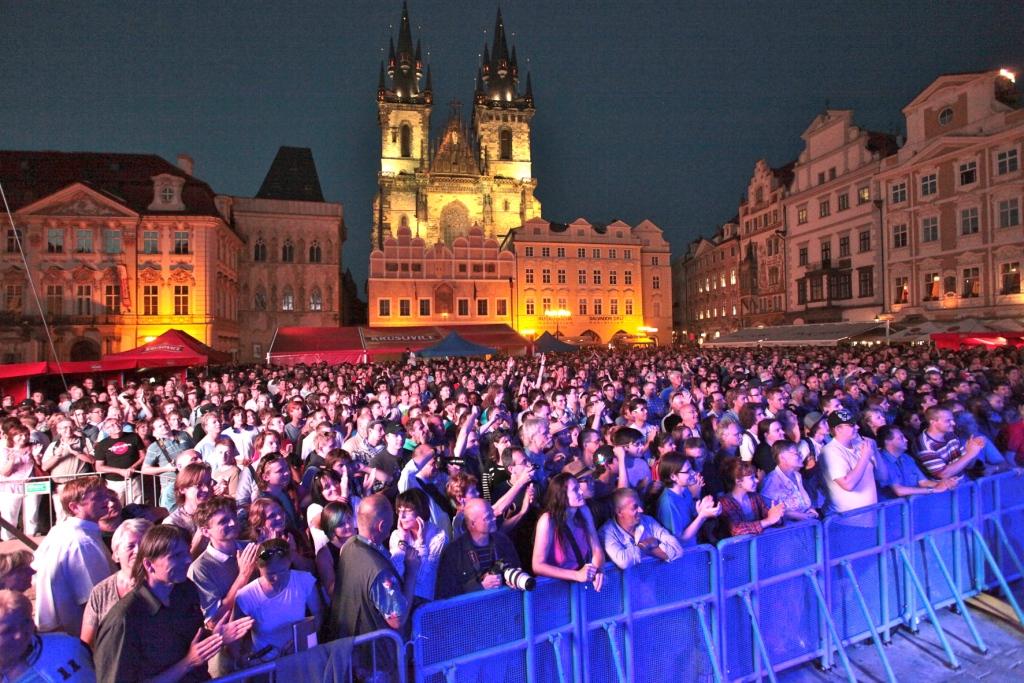 Every July, there are free jazz concerts in several cities’ main squares throughout the Czech Republic (Bohemia and Moravia), and this is only noteworthy due to the fact that so many of the artists are of such a high caliber. Organized by Rudy Linka, a Czech jazz guitarist who emigrated to Sweden in the early ’80s then moved to New York City by the mid ’80s, Linka now lives between New York, Prague, and his country cottage in south Bohemia. Linka started the festival in 2006, and since then he has brought musicians like Medeski, Martin & Wood, Bill Frisell, Dave Holland, Dee Dee Bridgewater, and Terence Blanchard for free shows.

And this year is no exception. “Charles Lloyd and Carla Bley are the biggest stars this year,” says Linka, minutes before he is about to go on air at the Czech Radio Broadasting studios in Prague, for his new jazz show called “Prima Linka” (or “Straight Connection” in English).

“Lloyd is 78 and Bley is 80. They are the jazz legends. You know there really are so few musicians around that are at this level, these days,” says Linka. Coincidentally, both Lloyd and Bley reside in reclusive Bohemian outposts along the Californian coast, the central and northern coast respectively.

The Charles Lloyd Quartet opens the festival in Prague, on Monday, July 11.

Lloyd’s group is among the best jazz units around featuring Jason Moran on piano, Reuben Rogers on bass, and Eric Harland on drums. Meanwhile, the spiritual jazz tenor saxophonist and flutist Lloyd is still going strong with his new release on Blue Note, “I Long to See You,” which features special guests like Bill Frisell, Willie Nelson, and Norah Jones (along with his quartet).

“Back in the 60’s Lloyd was probably the first crossover in jazz, comparable to someone like Branford Marsalis, today,” says Linka. “But back then, he was difficult to categorize, because he played with the Beach Boys, and so many other pop and rock bands, especially at big festivals.”

Lloyd first played Prague in 1967, with the phenomenal 22-year-old pianist Keith Jarrett (who was part of his original quartet), and it is a legendary performance for the Czechs, at the peak of their Prague Spring, before the country was invaded by the Soviets (Warsaw Pact) at the end of the summer in 1968. After ’68, Western groups of such caliber were few and far between until the Velvet Revolution in 1989.

“I didn’t see that one, since I was only 7-years-old, living in Prague at that time, and I had no idea who he was” admits Linka. “But he was on tour throughout the Soviet Union at that time, and he was with Keith Jarrett on piano!”

Czech TV will play excerpts from that magical concert from ’67 on the screen before Lloyd’s performance at Old Town Square, this year for the opening night of the festival.

“He’s remarkable,” says Linka. “He is 78 and if you listen to his new album, it’s a new sound! He could just be playing the Forest Flower songs from the 60s, and everyone would still come out to seem him; but instead, he opens his new album with a song by Bob Dylan. And it’s ‘Masters of War’!”

The other legend of the festival, Carla Bley, will be in Pilsen, July 18th. Initially a free jazz-improvisor from the early 60s, the composer, pianist and organist Bley will be with her trio featuring her long-time partner and collaborator, the electric bassist Steve Swallow, and British saxophonist Andy Shepard.

“I have eight or nine of her albums and it is such a creative and still likeable music—she is always working with the best musicians around,” says Linka. “For me, this year, it will be such an honor just to say, Ladies and Gentlemen, Carla Bley”

Besides the two American headliners, the Bohemia Jazz Festival will have a number of lesser known artists and groups from around Europe including Holland, Austria, Norway, Poland and Lithuania. Then beyond the Europeans, headlining three evenings, including Prague, Liberec, and Brno (July 12-14), is the latin-jazz pianist Harold Lopez-Nussa, a new sensation from Havana.

“Harold Lopez-Nussa is another star for the festival, but he’s only a star in Cuba,” says Linka. “When he plays, it is totally gorgeous. He is very young, and his brother is also in the band as the drummer. And there will be a dance instructor for a quick dance lesson for the audience, before the shows.”

The largest concerts are as expected in Prague’s Old Town Square with up to 15,000-18,000 in attendance. However, there were over 20,000 last year for Earth, Wind & Fire, according to Linka. The smallest concert this year is in Domazlice, which should draw about 3,000 for a city with a population of 12,000. “It is near the German border, so lots of Germans will also come to this one,” says Linka.

In Domazlice, the festival comes to a close with headliner, Susana Sawoff, a soothing singer and pianist from Austria, with her trio. There will also be Krzysztof Kobylinski KK Pearls Quintet, from Poland, and Hyperactive Kid, an exceptionally adventurous future jazz trio from Berlin.

“The bar has been set higher this year with the younger groups,” Linka says. “And I’m trying to balance the groups so people can enjoy and be challenged. It has to take you a little further. For instance, I saw Hyperactive Kid in Berlin, and they were playing arranged free jazz. It is all written out, but it sounds improvised with a lot of energy—with young blood,” he says.

“Miriam Bayle, from Slovakia, is the first concert on the program in Prague. She is opening for Charles Lloyd,” Linka points out. “So the festival starts with a singer and ends with a singer. They are like two bookends for this year.”

This will be the tenth year of the Bohemia Jazz Festival, and as it gets bigger with every year, “everybody expects more,” says Linka. However, since all of the concerts are free, the festival is completely dependent on sponsorship, from both the cities and business-sector, and this year, according to Linka, has been the hardest ever for getting the much need financial support. “Everyone is giving less,” he says, “but the difference between a sponsorship of 200,000 kc and 500,000 kc is large, but to even get that smaller amount, we still have do all of the same paperwork before and afterward.”

Linka pulls out his mobile phone to pull up a couple of websites he has come across recently. There is a UK website that lists the top jazz festivals of the season. “Look at this,” says Linka. At the top, there was the Copenhagen Jazz Festival, then Jazzhead. The third one on the list was the Bohemian Jazz Festival. After that, it listed the North Sea Jazz Fest, then Montreaux, and finally the Umbria Jazz Fest.

“I was shocked to see that,” says Linka. “We are suddenly on the list with these festivals that are on totally different budgets—it is just amazing how much we have done with so little. Last year, there was also an article recommending the top 10 places worth stopping by in the in the summer. It was in the Wall Street Journal, and the Bohemia Jazz Festival was on that list too!”

Before Linka is pulled away by his colleague at the Czech Radio studios, to prepare for his show, he says, “There are many festivals in the Czech Republic, but I see the festival that we are doing as something that is really festive. The beauty of the Bohemia Jazz Festival is that the people from the same town can come together. So that people who are living in the same building, or living across town from each other, but also someone who comes from another part of the country, or someone who even comes from another country will be there—and you see all of these people on the same square and they are all having a good time. There should be more festive events with more of this kind of music around the world. It is more important than ever, to get people together,” he says.