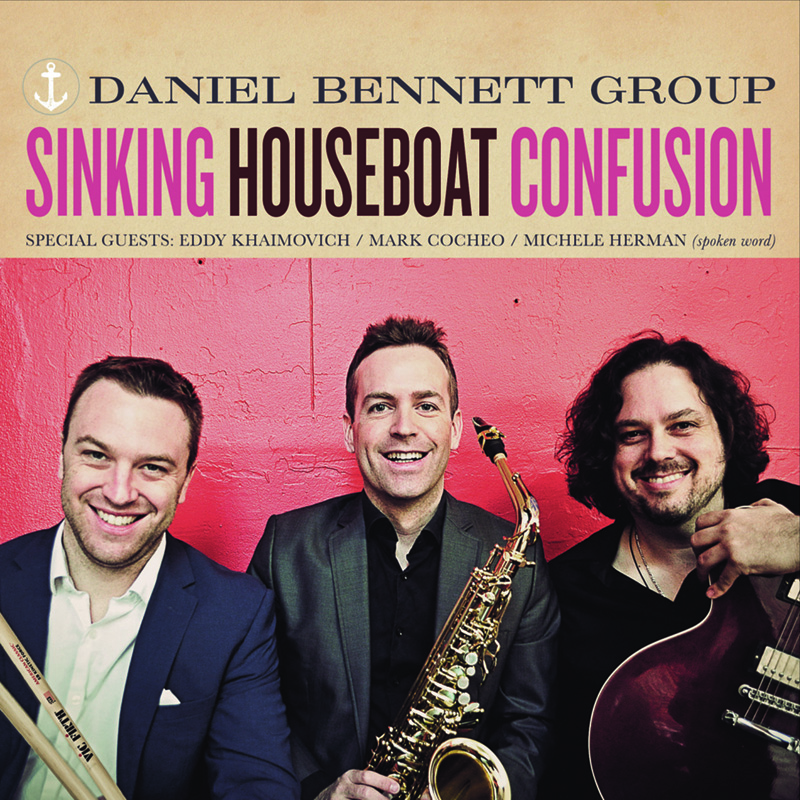 Daniel Bennett is a saxophonist, clarinetist and flautist who, with his group, The Daniel Bennett Group, has made solid inroads to music in both his native New York State and across America, with sell out dates on his tours. Recently voted Best New Jazz Group in the New York City Hot House Jazz Awards, the group present music which is unique in style and approach.

They describe their music as, ‘quirky, modern jazz fused with elements of surf rock and avante-pop’. The group have been playing more or less constantly for over a decade and are stalwarts of public libraries as well as jazz clubs and festivals. They recently completed 10 packed US tours. Their first 6 albums increased the group’s popularity and were critically acclaimed. Critics and reviewers have realized the magic of their music and the last album ‘The Mystery At Clown Castle’ was positively reviewed in Time Out, The New York Times, Jazz Weekly, All About Jazz and many other publications and proved Daniel has matured and gained huge respect for his original music. The group have appeared on TV and radio to share their take on music with a wide audience. Daniel has composed music for theatre and played woodwinds in ‘Blank! The Musical”’ which was the first fully improvised off-Broadway musical to launch on a national stage. With no conductor or sheet music the music was created spontaneously to accompany the cast and the New York Times called the show ‘Witty, Likeable and ludicrous’. The new album has been in the pipeline for some time and was anticipated with high expectations.

Jazz In Europe got an exclusive preview.  In his email to me, Daniel said, “This music will shock some and hopefully delight ALL! The Daniel Bennett Group performed 10 national tours in the last year. Throughout this time, we have carefully crafted this radical new sound Surf Rock + Avant-Pop + Modern Jazz.”

When there is high expectations some trepidation comes with playing the music for the first time so I braced myself. I have to say from the start, this is not the Daniel Bennett I was expecting. Past music has been more than listenable, jazzy, theatrical and very pleasant but this – this shows a maturing and confidence in their own identity which is palpable from the first note. The first listen was fine, the second good and the third I was hooked. I recognised Daniel’s style from the start but it was the quantum leap in that style along with a massive increase in confidence which assailed me. The CD opens, as all CDs must, with a familiar sound – it could almost have been lifted from one of their previous albums. However, ‘John Lizard Comes Home’ quickly diverges into something else – a rockier, faster-paced sound with some pretty neat guitar from Nat Janoff, underpinned by thrumming bass from Eddy Khaimovich whilst Daniel soars over the top, changing into minor key and back again part way through. This is confident, joyful music and tight? Boy is it tight. ‘Andrew Variations’ follows and again, this is led by Daniel’s clarinet which establishes the lovely melody. Which is played – in various forms again and again but never becomes tiresome. Daniel shows he knows how to work a theme and it breaks at just the right place for a complete change in texture and feel before re-establishing the theme in this far too short, delightful track.

‘Bobby Brick Sent Me’ starts with a funky, driving beat over which Daniel absolutely rocks on sax. There is a lovely, open feel to this track and Daniel is supported by light but effective drums and guitar. Daniel’s confident playing carries this track and he has reached that stage where a natural player crosses from being very good to intuitive and heading towards greatness. His playing is superb. The title track, ‘Sinking Houseboat Confusion’ is rocky, classy and cosily familiar in format. The composition is full of depth and warmth, each musician used fully, echoing the theme set by Daniel.  A rollicking drum solo from Matthew Feick cuts a decent break at the 1.30 mark before the theme returns. ‘Paint The Fence’ ushers in a change of mood with twangy guitar paving the way for Daniel’s flute which creates an atmospheric number lifting the listener up, away and then gently putting them down again, changed somehow yet perfectly replete with sound. There are some lovely off-beat moments in the rhythm but not enough to interfere with the mood. ‘Dr Duck Builds a Patio’ is jazzy, funky and the sax sounds, at times truly like a duck concentrating on his task of building. Daniel’s playing shows true confidence here, raspy, fast and offset by a great guitar solo. ‘We Are Okay’ is more rocky to begin with before a bluesey, racey theme is introduced and the jazz roots comes through with three rhythms all going on simultaneously, imparting to the number a sense of organised chaos. It develops each theme, each rhythm, all separate yet skilfully linked to create a cohesive number with a touch of free jazz mixed in. Gorgeous. The fact this works with the complex depths confirms the dexterity and understanding the musicians have and their more than nodding respect and understanding for true jazz composition in music.

‘Little Disappointments of Modern Life’ starts with an inspired bit of sax from Daniel, showing off his impressive licks. Then the poem by Michele Herman after which the track is named is read with Daniel accompanying the narrative with intuitive playing holding up and emphasising the emotion of the poem’s story. An unusual and surprising track but the theatrical nature works well and the music entwines with the words to create something more than a bit magical. As the voice stops, Daniel continues on sax, telling his own version of the story and the silence at the end is all-encompassing.

With ‘Animals Discussing Life Changes’ the music returns to the familiar Bennett format, with the lead instrument, a clarinet in this case, working up the theme adequately supported by the rest of the musicians. This is a good filler number and has a dancy, prancy feel about it. Sinking Houseboat Confusion’ (acoustic reprieve) has the addition of Mark Cocheo on acoustic guitar and while the original theme is there, it is treated so gently and slowed that it is hard to equate this track to the first version. It is, however, beautiful and arranged really cleverly.

There is about this CD a quality and a confidence which is a mile higher than anything I have heard the Daniel Bennett Group play before – and it was good before. It is clear Daniel is forging his way relentlessly towards that place in music where he feels most comfortable and, luckily for the listener, it is a place where the music is intensely listenable. Yet, there is still a sense of a door opening, not quite fully open – which bodes immensely well for the future. There are references to almost every genre so classifying the music is impossible – even the group call it avant-pop-modern jazz- surf rock and it is all of those things. However, I can tell you what it is and that is good music – listenable, recorded well and you get the sense of the endless work which has gone into this, the re-writes, the rehearsing, the tweaks and the respect for the listener because in the end, they got it just about right. Now if we can only get Daniel over his fascination with animals…Daniel said he would shock me – he did but in a good way. He also said the music will hopefully delight all – it will, (well unless you are brain-dead). This is seminal, not in the sense of music as a great whole but in the sense of this band – this is a gear change, a step up and delivered brilliantly.

To be released on Manhattan Daylight Media.