Vs Interpretation | A New Festival of Free Improvisation 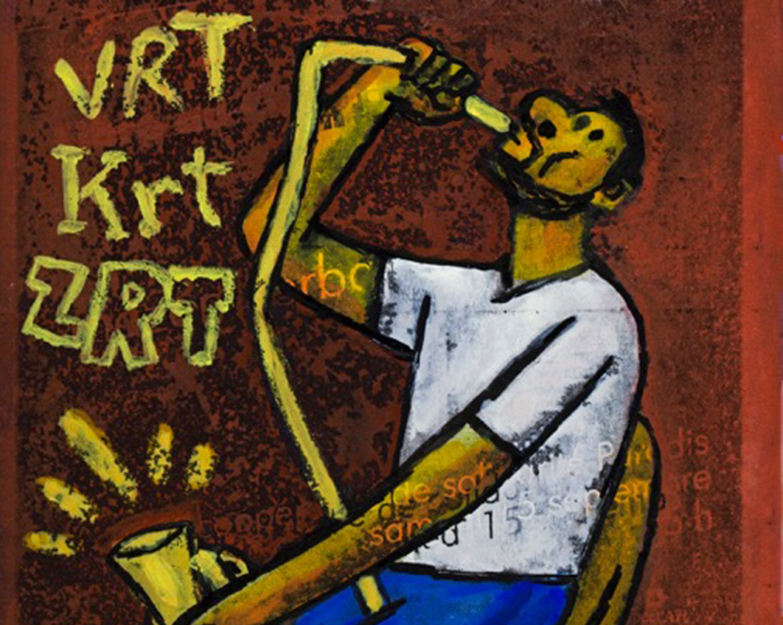 On July 16th & 17th in 2006, as Israeli bombs dropped on the city of Beirut, Lebanon, Mazen Kerbaj felt compelled to react. So the visual artist and musician, Kerbaj (born 1975 in Beirut), stood on his balcony and played his trumpet. For him, it was a duet between the bombers and explosions versus his free improvisation.

Kerbaj recorded the 40 minute improvisation and later released it as “Starry Nights 2006” on his own label Al Maslakh Records, which had already released free improvised and free jazz sessions recorded in Lebanon, and previous releases had also included recordings by their influences the German free jazz icon, Peter Brotzman and the free jazz improviser, Assyrian-American Michael Zerang.

Kerbaj along with a few of his fellow Lebanese free improvising musicians, including percussionist Sharif Sehnaoui and Christine Abdelnour (who is a saxophonist based in France), are among the special guests of the new biennial vs Interpretation Festival, in Prague between April 26 and May 1st.

The Lebanese musicians will each perform as solo artists, at different venues, then collectively as Rouba3i. This is a project that performs and records only sporadically and always with a special guest drummer-percussionist. For their performance in Prague, they will be joined by Tony Buck, who is an Australian zen master percussionist and leading member of the trance-jazz phenomenon The Necks.

This festival is closer in spirit to Nikelsdorf, in Austria, or Music Unlimited in Wales, but the Music and Artistic Director of the festival, Petr Vrba, also points out its important differences: “We have not only improvisation, new compositions, and sound art, but also dance, sound and movement, including the Czech experimental musical-theatre group Handa Gote, so all of this makes it a much broader festival,” says Vrba.

“But it is not chaotic—it is carefully thought out and there are other important aims behind it, which is to support the scene here. So it is not only to show ‘masters’ and then they all go away, but to create something more lasting with collaborators between the locals. We will have the special guests work with locals for intensive experiences together, creating performances during the festival,” says Vrba.

For instance, the Lebanese/Swiss duo Praed, which combines Arabic pop, free jazz and electronics will perform under the name Praed Plus in collaboration with Hans Koch and three local brass players, Marcel Barta, Jan Jirucha, and Pavel Zlamal, all highly regarded younger musicians on the jazz scene.

Another collaboration brings together Austrian Christof Kurzmann (electro-pop, improvisation and new music) and the Prague Improvisational Orchestra, which is a small army of free-improvising musicians and non-musicians inspired by Sun Ra, the Scratch Orchestra, and Butch Morris among others.

A co-founder of the Prague Improvisational Orchestra, the American jazz and experimental musician, double-bassist George Cremaschi, will also separately collaborate as a trio for a musical and dance performance with the percussionist Ninh Le Quan, and the esteemed dancer Julyen Hamilton.

“They will all have three days for collaboration,” says Vrba, “and so, all of these projects are really important to create interesting relationships—moments–for the artists and the audience, and some of the projects can also last afterward. Some will continue…”

“And so on several levels, we are trying to support the local scene—not just showing some super guys, but working with them too,” says Vrba.

Altogether, there are more than 60 performers for five days/evenings, held at nine main venues across Prague, including the National Gallery of Prague’s Trade Fair Palace, the Center and Foundation for Contemporary Arts Prague, the Institute of Intermedia at Czech Tech University, and an underground space in an old waste water treatment plant, Bubenec, near a sprawling park along the river Vltava.

“Finally, each evening ends with a powerful band,” says Vrba. “Friday there is Micro-vomit. On Saturday, Praed Plus, the collaboration with Czech jazz brass players. On Sunday, Peeled Eye.”

“The idea is that at the end of the day, there is something like a swoosh! It washes you off, like a tabula rosa, so that the next day you are fresh for another full day of strong musical experiences,” he says.

Vs Interpretation’s first festival, held in the summer of 2014, and organized by the Agosto Foundation, featured the free-improvising jazz trumpeter, composer, as well as Guggenheim Fellow and professor, George Lewis, as the guest of honor. Mazen Kerbaj, as another trumpeter and also a visual artist in the spotlight for this year’s festival pushes the program further in its aim to support experimental musicians, artists, and dance in Central Europe, and with its neighbors from far and wide

Most of the concerts have an admission charge, but some are free, particularly those in the more unusual settings, which are perhaps most fitting for such experimental musicians and performers.