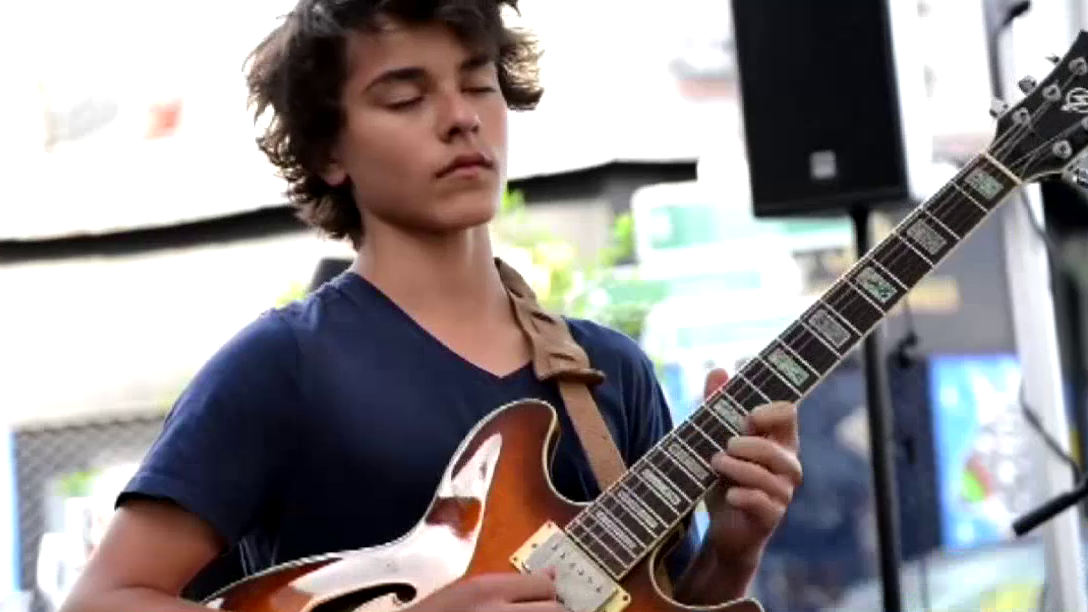 This is the second in a series of JazzOrato podcasts, meeting the musician behind the music, informative interviews by Nigel J. We hope it becomes a popular platform for the readership of JazzinEurope.com

Recently I came across a young great sounding jazz guitarist on YouTube, I thought, hopefully this young man will become a recognised name within the jazz scene over the coming years. I posted a comment on Tom’s YouTube page and received a reply. Thus started my connection with Tom and his wonderfully supportive parent’s.

Tom is a 16 year old, French jazz guitarist, who began playing guitar at age six and has composed since the age of 11 years. First Prize winner SACEM 2013 and 2014 the contest of Young Jazz Talent Festival of Saint-Ouen, he also received first prize in the Young Talent springboard Jazz & Swing Festival des Tuileries in 2013. He has participated in various festivals in France the Jazzitudes of Lisieux, the PAN Festival,  Minifest Caen, festival Jazz des Puces de Saint-Ouen

Tom’s influences include his self-taught guitar-playing grandfather – Menou, Santana, Wes Montgomery, George Benson, Pat Methany, Michel Cusson, and Miles Davis. Tom’s influences have continued to grow through 2015 with international travel to India for a musical fusion project. Also in 2015, Tom became one of the youngest endorsed Ibanez guitarists through Mogar Music.  Like his successful grandfather, Tom plays by ear and feel rather than learned music theory.

Tom has just returned from performing for Ibanez at the 2016 NAMM Show in Anaheim California, as well as guesting at well-known Jazz clubs in the same area.

Tom and his family recently visited our home. It was a pleasure to chat with this talented young guitarist and composer.  Listen as Tom opens up to my questions about his musical equipment preferences, his developing composing style, his grandfathers musical influence. His personal musical tastes, educational aspirations, and upcoming plans.

The latest news is that Tom now carries the accolade of being endorsed by Ibanez and recently, Roland…

Tom has his own website in French which is worthy of a look.

Stay tuned for the next recording!