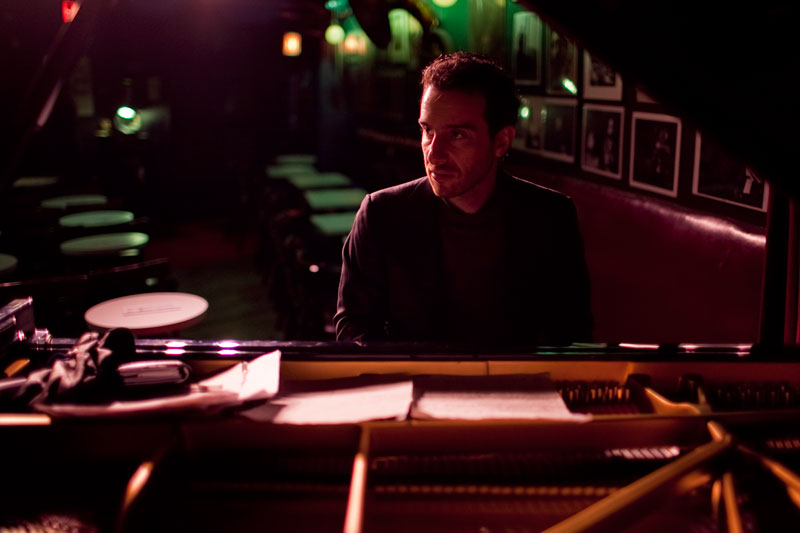 The piano takes center-stage for four evenings in Prague, in mid-April, with internationally-acclaimed pianists, including Luis Perdomo, Gerald Clayton, Kevin Hays, and Aaron Goldberg, and the best, up-and-coming, younger jazz pianists on the Czech scene, including Martin Brunner and Jiri Levicek.

Although Gerald Clayton has recently been called “one of the standout jazz pianists of his generation” by The New York Times, it is fairer to say that there is truly no one stand-out in this mini-summit of younger and mid-generation jazz pianists.

All of the featured pianists in this mini-fest stand out for their extraordinary technique and have all excelled on their individual paths, particularly the Venezualian-born Perdomo, who will be performing with the Albert Vila Quartet, from Spain. Noteably, Aaron Goldberg’s path is stranger than the rest, and his concert in Prague will feature special guest, the drummer Leon Parker.

In addition to being a leader of this own trio with Reuben Rogers (bass), and Eric Harland (drums), Goldberg played for several years with Joshua Redman, touring and recording from 1999-2002, and since then he has collaborated Wynton Marsalis, Nicolas Payton, Kurt Rosenwinkl, and many others.

But on the side, Goldberg is also a philosopher, with a BA in “Mind, Brain and Behavior” from Harvard, and an MA from Tufts University. “I studied analytic (mostly English-language) philosophy,” says Goldberg, refering to his MA studies, at Tufts. “Epistemology, philosophy of language, a little bit of ethics and metaphysics, and especially philosophy of mind. I’m most interested in the intersection of philosophy and psychology, in the mind-body problem and in theories of consciousness,” he says.

How Goldberg brings this intellectual side of his life into his long-term, professional career as a jazz pianist seems almost too obvious, as complimentary activities, even as strangely as it may seem. “Jazz is an art in which clear thinking, listening, honesty, integrity, truth, eloquence, creativity, a coherent narrative and asking big questions are all valuable skills. This it shares with philosophy,” says Goldberg.

“On the other hand, jazz is a social music first and foremost. It aims to produce and communicate feelings. This means that emotional openness is valued more highly than rationality. Then, as an improvisational art form, spontaneity, risk-taking and thinking-on-your-feet is much more important in jazz than in philosophy.”

“Jazz is in-the-moment. While philosophy is in an important sense timeless/out-of-time,” he emphasizes. “And most importantly, both help me to be myself and to live my life well. Which in turn deeply affects my music.”

Goldberg’s newest record “The Now” was recorded with his long-standing trio, Reuben Rogers (bass) and Eric Harland (drums), but for this European tour, he is performing with Leon Parker, a drummer, formerly from New York, and now based in France. Parker has a reputation for pushing his projects and performances to the physical extreme. And his presence on stage pushes others to do the same.

“I first met Leon Parker 24 years ago,” says Goldberg, who was born in Boston in 1974. “We performed once together in 1992, when i was 18 years old. It was an honor for me at the time as he was one of my favorite drummers in NYC.”

“We played again for the second time 20 years later in France, and we still had a very strong connection! Leon has been living in France from 2001 until now, but he is a one of a kind musician who had a profound impact on the NYC jazz scene, particularly in the 1990s, and continues to inspire,” says Goldberg.

Goldberg and Parker initially created an experimental duo project, in 2015, which was funded by a grant from the French-American Cultural Exchange program to collaborate together on concerts and recordings in the USA. Since then, they have also been playing as a trio with Rogers, for a European tour last year, and for the concert in Prague, they will be accompanied by the Israeli Barak Mori.

“I have known and performed with both of them for many years,” says Goldberg. “The interplay in the entire trio is key, not only my relationship with Leon.”

As well, exceptional interplay among the musicians should be a given for the other concerts, as part of the Piano Days at Prague’s Jazz Dock, also featuring the top-notch, younger Czech pianists, including Vítek Křištan, Martin Brunner and Jiří Levíček over four consequtive evenings from April 16th-19th.