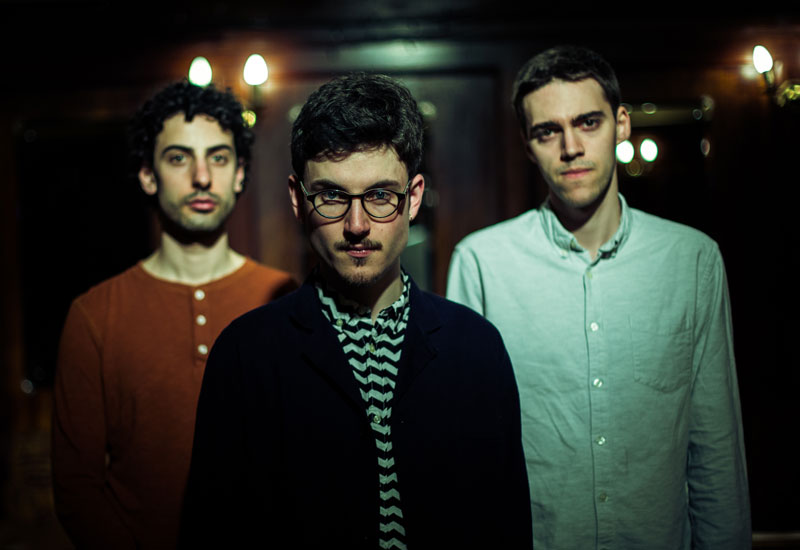 Elliot Galvin was compared to Django Bates in The Guardian – with a sense of English humour, great improv chops and strong character as player and composer. I disagree. On this CD, Elliot and his trio prove they are unique, sound like no-one else and have a definitive style all their own. Already the winners in 2014 of the European Young Jazz Artist of the Year in Germany, Elliot Galvin and his trio prove here, they have a lot more to offer.

‘Punch and Judy’ opens the album and, maybe as expected given the title expected there are Mr Punch sound effects – complete with riotous misbehaviour and an annoying woman telling Mr Punch off before the piano dives in – all rickety trickety and dancing riffs. This track is huge fun and develops a central theme, underpinned by constant bass and percussion. The arrangement is eclectic and it is unclear where the track is taking the listener but who cares – light and breezy, that’s the way to do it! Take the annoying Mr Punch off and it is a terrific track. The second track is ‘Hurdy Gurdy’ and it is piano-led, driving and just this side of raucous. The theme gets faster, faster and, like the title suggests, take the listener to a place where everything is taken at breath taking speed, with little interceptions from percussion and bass. The accordion works the theme over the percussion and bass around two thirds of the way through and is surprisingly delicious. A gorgeous Calypso beat sashays and sways through the second half. Tipu’s Tiger is a contrast with sonorous sounds to start before the piano sets up a melancholic and beautiful theme which is soft, almost whispered and delicately counteracted by bowed bass and glockenspiel, who take it and play with it until the piano re-enters to finish. ‘Rolling’ is a very short interlude with that infuriating Mr Punch making a re-appearance and then comes ‘Blop’ which is a wonderfully arranged piece, starting with a niggling stylophone solo but then it develops into a wonderful number with a short counterpoint riff set against a swinging beat and it is foot-tappingly engaging. A conversation continues between the instruments right the way through with the melodica leading with the last part a surprise as it swings for all it’s worth. A great track. A comic take on Bop? Maybe.

‘Lions’ begins with bass and Kalimba with the Kalimba then setting up some cooky little tunes and rhythms, underpinned by deep bass and percussion – enjoyable and quirky. The central part of this is an eclectic free for all with percussive notes, a tune, a bit more percussion and finally the kalimba.

‘1661’ begins with atmospheric bass and then piano riding the top with a canorous but gorgeous theme which develops through the piece and is just the thing to take the listener down to a place of hushed quiet before ‘Mac The Knife’, which is atmospheric and darkly delicious over a relentless rhythm. The piano here is played like a symphonic interlude with some devastatingly good ascension and descension across the keyboard. It builds around the piano, which takes the bass and percussion with it into realms of astonishing musicality. The only recognisable theme from the standard comes right at the end on the glockenspiel. ‘Polari’ is absolutely wonderful and I say that with tongue firmly out of cheek. It is one of those pieces which has more every listen – a bit of swing, a bit of improvisation and a lot of to-ing and fro-ing between the musicians and instruments. This track perhaps has the most complex structure on the whole CD but it stops short of being over worked. Delightful.

‘Cosy’ ends the album and is a pretty piece with whistles, gentle piano and a sense of ease before it delivers the punchline which is beautifully arranged, well worked section of sheer rhythmic jazz.

The over-riding feeling of the CD is that of a composer and pianist with a lot to give. There is a slight sense of over load here in terms of over-reaching and trying to show so many different facets but it works on first listen and is even better on the second or third so work with the music. There is a sense of humour but also a seriousness and respect shown to the music which is clear. The arrangements are good and there is deep structure to the composition with texture and layers. There is a sense of more to come with this combination of musicians and more than that, from the outset, there is something quite exceptional that makes you want to take that second listen, and the third. The music is familiar, yet absurdly original in its delivery and style. It is not precocious and there is a clear understanding of theme and cadence, which is refreshing. I would not mind betting this is an act and a composer on the strong ascent. Punch is out in July 2016.