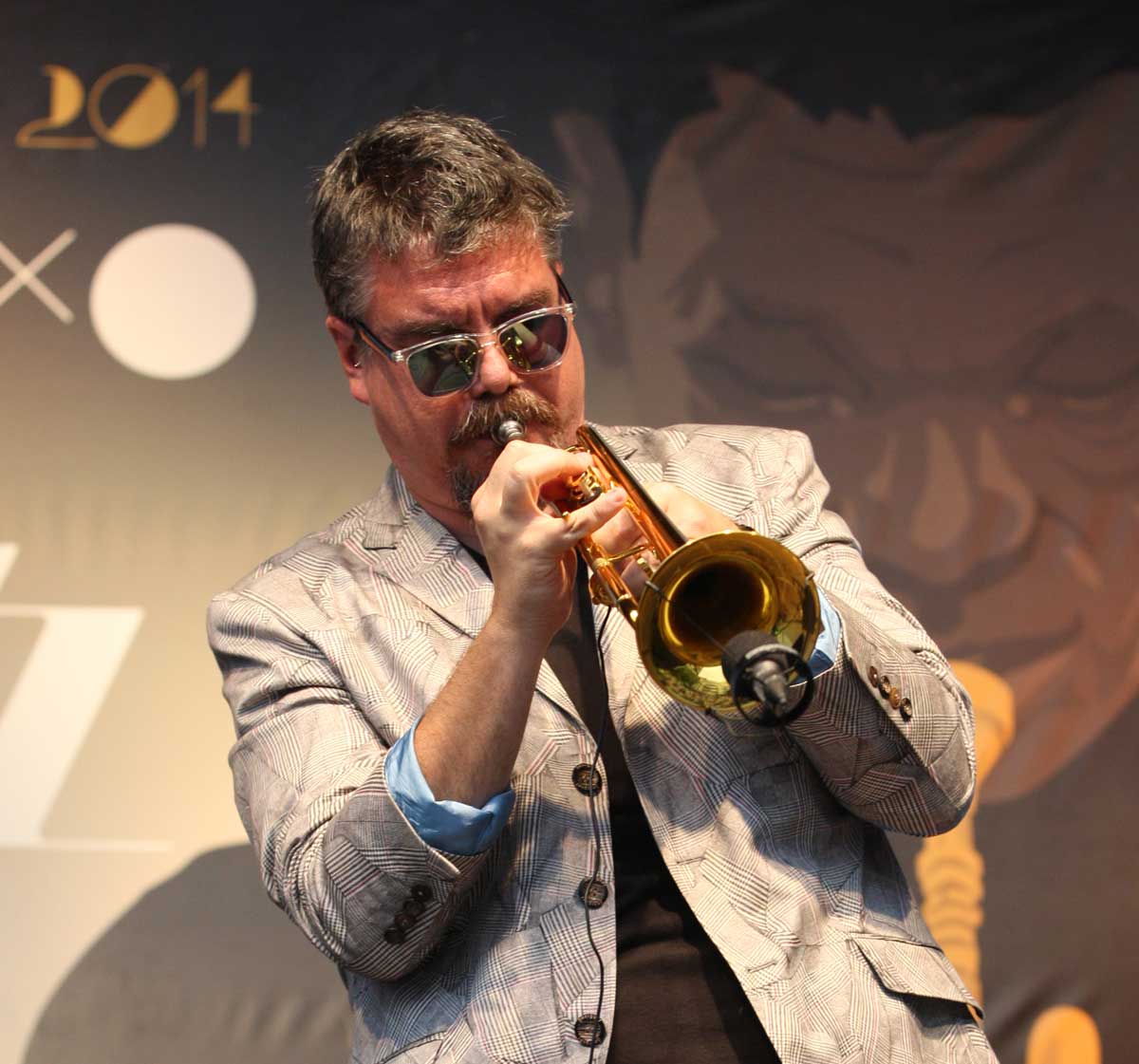 Trumpet player David Pastor has stared in a meteoric walk through the Spanish jazz scene. With a non-stop schedule he has managed to develop an active career as a sideman, a professor and also as leader of Nu-Roots, the thriving successful trio that he created just six years ago.

David Pastor is one of the most hired trumpet players in the Spanish jazz scene. After a more than twenty year professional career, Pastor has established himself as one of the big names in Spain. With his brilliant and potent sound (achieved with a lot of work) and his versatile and rich language Pastor has become the perfect sideman for national and international jazz musicians. In the last few months he has shared stage with well knowen jazz figures like Paquito D’Rivera and Dick Oatts. Pastor has settled in Barcelona), where he works as a musician and professor at the renowned music school Taller de Músics.

Even though Pastor has a non-stop schedule with numerous formations, reinventing himself with different styles, during the last six years, he also found time to focus in his personal beloved project, Nu-Roots, with which he has just released the third album Nu Tunes & Old Tunes (Omix Records, 2014). In this trio formation, accompanied by the fine piano/keyboardist José Luis Guart and the categorical drummer Toni Pagès, Pastor has discovered the perfect space and freedom to emerge as a leader.

Marta Ramon: Nu-Roots is an intimate formation for someone used to playing in large groups like big bands and orchestras, why did you choose this reduce number?

David Pastor: I had been playing with lot of big different bands and I wanted to start something personal, a band which gave me the possibility to get out of the jazz trend I had been working until de moment. I already knew Jose Luis and then the Nu-Roots story popped up. At the beginning we played standards and some versions. But Jose Luis loves the Rodhes and we thought about using it, and that was how Nu-Roots born. We needed a versatile and modern drummer, who could provide a contemporary sound and we thought that Toni could suit in this idea, as he came from the jazz fusion, and he has played pop and flamenco as well. Our main common point is that we are truly melomaniacs. We are always looking for new rhythms and melodies to share with the group!

MR: You appear really satisfied with the results you have got in just six years working together, as when someone listens to Nu-Roots it feels like this is a decades project.

DP: [Smiles] “Yes we have been working together for six years now, and I am really happy because Nu-Roots started as a personal one but little by little Toni and Jose Luis got involved and now it is our project, we are Nu-Roots Trio, it is our band! Nu-Roots is an explosion of all music that has influenced us along our lives. My musical language is very jazzy, but I lived the 80’ and 90’ and I kept its sound concept, and they as well. Apart from jazz, we like different kind of music styles: disco, Brazilian music, gospel, black American music, r&b… And Nu-Roots is all that. It’s like a mix of our musical backgrounds with the freedom of the possibility of doing what we like. That’s the liberty we have as colleagues and friends: we know how a tune starts but not how it will end.

MR: On stage it’s obvious the huge background each of you have and the power that this knowledge gives you to explore the possibilities of the jazz language. How do you face the creative process?

DP: We compose the tunes in an open and creative way, as they look when we play them on live. When we meet each one brings harmonies and melodies and we work on them. I have the idea of what I want, how I’d like it to sound having in mind Jose Luis and Toni. We have created a personal esthetic so we are working in push it forward.

MR: Also, the electronic effects let you to reach that objective of pushing forward your music.

DP: Yes, we have chosen the effects way. We are living the technological Era, it’s very easy to take with you the gadgets for creating effects. We can play with all the possibilities technology offers us with just a computer. It is like having more instruments in the band. Everything remains open. Nu-Roots can become a sextet with just this detail. We have created our own samples and we throw them to heighten music and make it more enjoyable.

MR: Another important element to enrich your new album are the singer’s voices and the special collaboration with one of the best Spanish jazz guitar players. Why did you pick up these four interventions?

DP: I had in mind these collaborations for long. Gemma Abrié is a great musician and she has a really nice poetic faced. She has adapted ‘Aguas de Marzo’ (T. Jobim) lyrics with a really good taste, I knew that song would be perfect for her. For ‘Blue in Green’ I thought in Saphie Wells because she has an attractive and sensuous voice. And Susana Sheiman is a really good friend of mine since few years ago. I think she is one of the most missed voices in Barcelona’s jazz scene, as she has always sung classical standards. She is a really creative woman so she was delight with this contribution, because she had plenty freedom to express her personality. And, of course, we had Ximo Tébar collaboration. He is a great guitar player and also a lifelong friend!

MR: Nowadays, Nu-Roots can’t be conceived without the fusion approach to other styles like bossa nova and funky.

DP: Yes, as I told you we are melanomaniacs. We listen to lot kind of music styles and we get inspired by them. Personally, I love Brazilian music. I like tradicional Brazilian music, like the choro. I love the instrumentation and the voices. I also love the funky from the 70’s. We love to re-harmonize tunes and change them until they fit in our personality as a group.

MR: In addition to the fusion aspect, the free content is the other noticeable feature on your new CD.

DP: Yes, in the new album we have developed free aspect, but with responsibility. When I was younger, I was really lucky to share few years with Brian Trainor. He played free in New Jersey during the 70’s, and he taught me how to play free in a musical sense. Jazz is free itself, but when you play free you can’t forget the tonal condition. You need to give sense to the music, the freedom must be linked to the musical context. You need to control your instrument, you can’t lose the intention. When you play free, all the music you have studied and listened along your life comes out. You need to be able to play free, you need to respect the music.

MR: This CD, definitely, has placed you as one of the most potent bands in the Spanish jazz scene.

DP: I don’t know if we are or not in that place, but I feel that the audience has embraced the project and that they really like our new album. We were playing the new tunes in Getxo Jazz Festival, even the CD was not out yet. And once it was launched, just one month ago, we have presented it in many different venues in different cities. Now we are waiting to be few dates to be confirmed in other European countries. And we already know that nest year we’ll be playing in Montevideo Jazz Festival (Uruguay)! I am happy to see that we are starting to see the results of our implication.

MR: And what about the educational facet, why did you decided to be a music teacher considering you are able to live just from being musician?

DP: Yes, first of all I am musician, and because of that I just teach two days a week. I was asked to join to Taller de Músics in 2009. That year I had the same musician work as other years, but everyone was scared about the economic crisis. It was a nice work that didn’t required too much time, I could chose my schedule, and I had a wide freedom to combine it with my concerts, I could make up the lessons other days or send a substitute teacher. I got the freedom you don’t find in a Conservatory. So having that freedom and a huge complicity with the students that want to study with you and that look for you, I couldn’t say ‘no’! It’s really nice, because they go to see you to the concerts. It’s a really creative environment as you are creating music all the time. And there really interesting musical projects I am in at the school. I have lot of fun teaching there.

MR: So how does it feel to be teacher in the renowned music school Taller de Músics?

DP: I had had bad experiences in different music academies, because I didn’t feel that there was respect to the jazz music. I always felt questioned by someone, and I saw that the pupils didn’t evolve because they didn’t take it seriously. So that discouraged me. But Taller de Músics is other thing! It’s a private school which has been educating professional musicians for thirty years. The students that go there is because they really want to study with us, that’s the charming of Taller de Músics. The students chose the professors because they know us, as the 90% of the professors are active musicians. It is also a big responsibility because there must be a coherence between your lessons and what you do when you are on the stage. I have a really tight relationship with my pupils, because you know that they want to study with you so the communicational link is really strong. I share with them all I know about music and my instrument, and the things I don’t know I tell them where they can be found. I dream is that the reach their goal as a professional musicians. Because of that I feel really proud when they finish school and start their own projects, I always try to support them and when they call me to collaborate I’ll do my best to be there. I am delight to be able to put a little seed in each one.

MR: And what’s coming next?

DP: I’ll keep teaching in Taller de Musics and developing my sideman and leader facet as a musician. For the moment I am really happy because I am crossing borders! I’ll be playing in Italy next April in Italy because I has been invited by bassist Massimiliano Rolff to play with his band in Genova, Turin and Milan. And, aslo I’ll go again to the International Trumpet Festival in Gran Canaria. I was there last summer, I was the only jazz musician, and I felt really comfortable working with great musicians and trumpet players like Pancho Flores and Otto Sauter. I’ll keep working to make things happen!