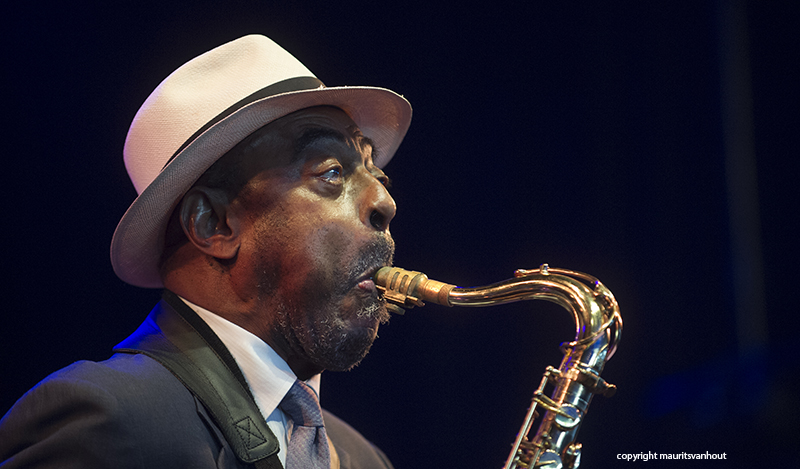 Jazz Middelheim in the Belgian city of Antwerp will celebrate it’s 35th edition next year. This years 34th edition was another success, festival organizers pleased with more than 16,000 visitors and a great program of top concerts. In my opinion the star of the festival was singer Cécile McLorin Salvant.

On the first day of the festival many local Belgian musicians impressed and showed that jazz in Belgium is alive. The concert by the Brussels Jazz Orchestra conducted by Darcy James Argue was the highlight of the day.

Craftsman
Pianist Eric Legnini performed a program featuring the music of Ray Charles. Good orchestra and fine singers provided a swinging concert with lots of soul. Eric Legnini is a remarkable musician that never disappoints, not only on CD but also live on stage, a first class craftsman. The singers Sandra NKaké and Kellylee Evans excited the audience during their trip through the musical world of pianist and singer Ray Charles. Festival director Bertrand Flamang said that Sandra NKaké is “the discovery of the festival”.

Impressive
Darcy James Argue continues to amaze. The Grand Master among young composers connects sounds never heard before in a big band setting. The Brussels Jazz Orchestra has the quality and soloists available to play the at times very difficult arrangements by the American-based Canadian. Impressive were the performances of “Codebreaker”, dedicated to the British scientist Alan Turing who broke the Enigma code during World War II. Later he was derided in his own country due to the fact that he because he was gay, and “Best Friends Forever”. With that number the composer commemorates the many thousands of Canadians who died on the battlefield in Belgium during World War I, thus stressing the ties between both countries.

Taxiwars closed the first day. Singer Tom Barman (lyrics) and saxophonist Robin Verheyen (compositions) are the two leaders of the group who’s music is characterized as a punk jazz. Vocals and spoken word by Tom Barman combined with the solid beat of bassist Nicolas Thys and drummer Antoine Pierre impressed. Robin Verheyen was in great shape and that led to enthusiastic response from the public. It was a charming end of the first day.

Question: Is there an analogy between the albums “A Love Supreme” and “Aitica Blues”. Both compositions and composers were in the Focus on the second day of the festival. The first composition is a message with a religious content, John Coltrane addressed to God with his four-part suite. Archie Shepp’s “Attica Blues” is a political statement against the oppression of African Americans.

Answer: There is an analogy. The music has the same message: hope for/work towards a better world.

Four students from the Conservatory in Antwerp and their guest lecturer tenor saxophonist Chris Cheek presented themselves under the name Gizmo. The American had done a good well, after spending a week working with the four students the result was a mature concert featuring compositions by both the pupils and their teacher.

The second concert on the second day of the festival was the first by artist in residence, pianist and composer Jason Morgan. It was Chamber music for piano, cornet (Ron Miles) and guitar (Mary Halvorson) performed by three musicians who respected and stimulated each other. Both cornet player and guitarist told their story each in their own way, sometimes clearly furious free jazz influences along with gentler sounds.

Political commitment is part of Archie Shepp’s life. The album “Attica Blues” was published in 1972 and was a protest against the suppression of the riots in the Attica Prison after the death off Black Panther Member George Jackson. Everywhere there is oppression, Archie Shepp says in 2015, “Perhaps we are all Prisoners”. The performance by Archie Shepp’s Attica Blues Band included “Blues for Brother George” and “Come Sunday” by Duke Ellington. Archie Shepp played and sang with great motivation, in his playing you could hear influences of Ben Webster. The singers Cécile McLorin Salvant and Marion Rampal impressed as did the French big band who’s playing was a bit too enthusiastic every now and then.

The closing concert on day two was a unique event, a concert like you rarely experience. Two of the best tenor saxophonists of this time honored one of the greatest saxophone players in the history of jazz and his suite “A Love Supreme” with their program titled “Sax Supreme”. Joe Lovano and Chris Potter pushed each other to new musical heights, not a tenor battle but a tenor revelation. It was a dazzling performance with the veteran Cecile Mcbee on bass and the young talents Lawrence Fields (piano) and Blake (drums). The concert developed into sacred moments and those moments are also part of John Coltrane’s “A Love Supreme”.

The music of New Orleans was the theme on the third day of Jazz Middelheim. Marching bands were on site and Dr. John paid tribute to Louis Armstrong with “The Spirit of Satch”. Star of the day was a singer Cécile McLorin Salvant.

Singer Robin McKelle was the first cab off the rank on the main stage. She started her career as a jazz singer, but is now much more active in soul, blues and Rhythm ‘n Blues genre. Her raw voice lends itself well to this genre as well as her sense of show.

Cécile McLorin Salvant was accompanied by her own trio. It turned out to be a showcase for her amazing abilities as a singer. Timing, range, intensity, diction, expression, performance and her voice of course. Everything was perfect showing singing as an art form of the highest level. Jazz, blues and a chanson, everything was equally fascinating. The audience listened breathlessly and cheered and clapped after every song. A concert to remember forever.

Jason Moran presented a show dedicated to the music (and life) of Fats Waller, one of the most respected and popular American pianists, singer and entertainers from the thirties of the last century. The solid beat by the rhythm section served as the basis for the Fats Waller Dance Party. It might have come as some sort of a shock to the “classic jazz fan” but the performance certainly showed Moran’s versatility.

Dr. John had a small big band for his tribute to Louis Armstrong. He came to the project because Satchmo appeared to him in a dream. “Play my stuff in your own way” were the words spoken by Louis Armstrong in Dr John’s dream. The singer/pianist was assisted by two guest soloists, the Belgian trumpet player Bart Maris and singer Céline McLorin Salvant who gave the concert just that little bit extra.

On the final day of the festival, four trios performed on the main stage and it was hard to choose which band performed the best as they were all outstanding.

The Artist in Residence, Jason Moran, opened the fourth day of Jazz Middelheim with his wife, opera singer Alice Hall Moran and guitarist Bill Frisell. They performed a program that found its basis in jazz, classical and roots music. It was a memorable concert without boundaries. The three play regularly together and it showed. An opera singer uses not only her voice, she is also required to be an actor and that is what Alice Hall Moran gave to her performance. Her singing and acting were in perfect balance as was the case for the entire concert.

No time for an encore

Some fifty years ago pianist Steve Kuhn and bassist Steve Swallow played together for the first time. The longtime friends had drummer Joey Baron at their side in Antwerp. “Please relax and enjoy”, Steve Kuhn said at the beginning of the concert; “And be quiet!” he added. On the main stage the musicians have an hour and fifteen minutes for a concert, but this trio had to stop after an hour and a half and there was no time left for an encore because the stage had to be built up for the next concert.

In the early nineties of the last century Aldo Romano, Louis Sclavis and Henri Texier travelled through Central Africa and the album “Carnet de Routes” was the result. In Middelheim they once again played the music of that trip, with a phenomenal Louis Sclavis on bass clarinet and with strong playing by Henri Texier on the (three-four) bass. This European trio performed at a level equal to the three American groups.

The Bill Frisell Trio closed the festival. The master guitarist started the trio with drummer Kenny Wollesen and bassist Tony Sherr fifteen years ago. The musicians know each other well so there is no need for a set list in the opinion of Bill Frisell. He just starts a tune and the others have to follow. The music of Bill Frisell is like the sea. Ebb or flow, there’s always movement. Sometimes the sea is rough, sometimes it is calm, just like the unique guitar playing of Bill Frisell. The concert was a worthy closing of the festival.

New on Jazz Middelheim were the so-called Jazz Talks. Author Ashley Kahn spoke about the creation of his book “A Love Supreme” (subtitled: The Story of John Coltrane’s Signature Album). He interviewed the tenor saxophonists Joe Lovano and Chris Potter on their program “Sax Supreme”, dedicated to the music of John Coltrane. And with Jason Moran Ashley Kahn discussed the influence that pianist, singer and entertainer Fats Waller has had on the development of jazz. The Jazz Talks were instructive and an enrichment of the festival.