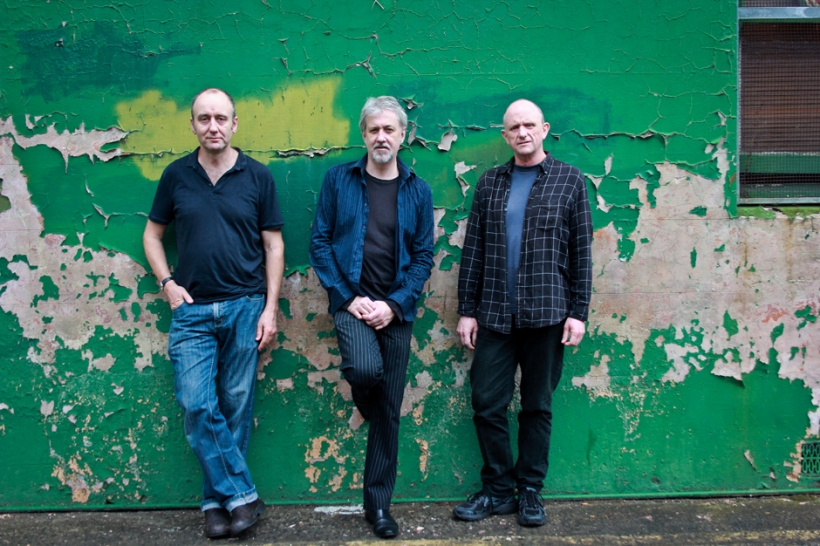 The Necks comprise Chris Abrahams on piano Tony Buck on percussion and Lloyd Swanton on bass. Chris Abrahams is from Oamaru, New Zealand but grew up in Sydney, Australia and has been an important part of the Sydney jazz scene since the early 80s.

He has played with Mark Simmonds’ Freeboppers and The Keys Music Orchestra. In 1984 he released his first solo piano album – Piano, followed in 1986 by Walk. In 1985 he became a founding member of the Sydney indie rock band The Sparklers and collaborated with singer/songwriter Melanie Oxley through the 1990s. He released a third solo piano album Glow in 2001, followed in 2003 by Streaming, and Thrown in 2004. He has worked with many important improvising musicians including percussionist Burkhard Beins, Mike Cooper and composer/pianist Anthony Pateras.

Tony Buck graduated from the New South Wales Conservatorium of Music. He has worked with many great musicians including sax/flute player Vincent Herring, Clifford Jordan, Mickey Tucker, Branford Marsalis and Ernie Watts, Han Bennink, Peter Brotzmann, Wayne Horvitz – the list is continuous and grand. He is leader of the improvising band, ‘Peril’ with Otomo Yoshihide and Kato Hideki. Lloyd Swanton was born in Sydney and is part of The Catholics who have released 8 albums with most tracks composed by him. Three received ARIA (Australian Recoding Industry Award) nominations. Their album Simple was nominated for the German Deutsche Schallplattenkritik Award. He has played across the world, won Best Bassist in the Australian Jazz and Blues Awards three times and has performed with Dewey Redman, Nat Adderly, Clifford Jordan, Sting, Barney Kessel, Andrew Hill, Phillip Johnston, Jim Black, Tobias Delius and many more and has composed film and TV scores, including The Beat Manifesto, winner of an Australian Guild of Screen Composers Award for Best Short Film Soundtrack. With Chris he formed The Benders who worked from 1982-5. So, with this pedigree something special was always on the cards.

Vertigo is The Necks’ 18th album and will be released on Northern Spy Records on 30th October. It is a journey across sound dimensions. It opens with the piano setting the theme of rolling, atmospheric tones. Percussion interrupts the theme and all manner of sounds, whistles, effects and quirky additions develop the atmosphere of this intrinsically developed sound poem. The piano fades to leave percussion developing its own theme with tinkling, bell-like developments for several minutes before the piano again undermines and underpins with deep, rolling breathing notations, making the music seemingly alive, organic and evolving. The textures are added in layer after layer of sound experimentation which gives the album meat and body. At times the music is multi-layered, sensuous and compelling, at others light, open and spacey. The mid-point is almost a transcendence into another-wordly place with all three musicians working to create a new and intriguing musical landscape.

Vertigo is an album which takes some listening – it creates images ranging from barren, desolate environments to deeply layered textured multiverses where anything might happen and the next source of sound comes from who knows where. It is gentle, yet mighty in its impact; delicious at times yet sonorous and laboured at others but the overall effect is an evolution over almost 45 minutes and the music develops and changes as these three musicians interact, try new ideas, discuss with their instruments and create an album which has its own identity. Like layers in a box of chocolates, each section is wrapped with different sounds and as you listen, each is slowly unwrapped and the sounds released tantalisingly, carefully and with absolute confidence. The final part of the album is signified by vibraphonic pitches entwined around percussive notes and slides on guitar strings which leave the listener satisfied yet somehow wanting more.
The Necks have delivered another beautiful album with all the trademarks of their studio work plus intriguing interactions and journeys into new and interesting ways to present music. Something special was promised and In Vertigo delivered.