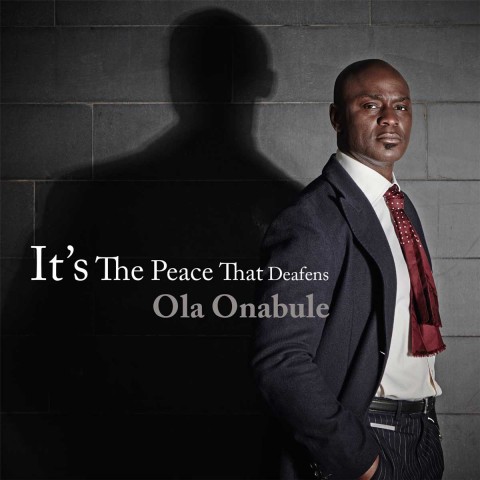 By: Peter McLaren | Photo’s courtesy of the artist

It was earlier this year that I first became aware of the British-Nigerian vocalist Ola Onabule. It was  after reading Becca Horne’s interview with him, published on this site, and what drew my attention was the massive number of reads (13k+) the article generated. After viewing a number of his live video’s on YouTube I had to ask myself, ‘why have I not heard of this guy before?’

Recently it seems like every time I check my Twitter feed, there’s news about Ola; headline performances at the International Jazz Day, concerts with the “crème de la crème” of the European Big Band scene and of course the chart success of the re-mix of his 2004 song “Soul Town” that spent more than two weeks at the number 1 spot on the UK soul charts.

A few weeks ago, a pre-release copy of Onabulé’s new album “It’s The Peace That Deafens” arrived on my desk for review. As you can imagine I wasted no time on getting this disc into my trusty Harmon Kardon for the first listen. The first thing I noticed about “It’s The Peace That Deafens” is the largely acoustic line-up on the album, based on his previous releases not something that I would expect. Ola states in the promo video put together for the album that he was coming to a period in his life where he felt the need to take ownership of his African background. While you can’t in any way call this a World Music release, African influences seem to run as a theme throughout the entire album. However it’s not just African influences that can be heard here, Jazz and Soul influences have all been creatively woven into twelve beautifully crafted compositions that form an album that is impossible to place into a single genre.

Included in the accompanying booklet are the complete lyrics and it’s safe to say these are not your average “boy meets girl” throw away lyrics. Onabulé’s lyrics are relevant, poetic, poignant and at times provocative. Take for instance the title track “It’s the Peace That Deafens” where Ola reminds us that it’s the stability and peace we have in western society that deafens us to the injustice experienced in other parts of the world. A subject that couldn’t be more relevant.

While in my opinion not one track on the album disappoints, there are a number of tracks that do stand out. Jankoriko (the single) weaves a number of complex poly-rhythms into a consistent whole that compliments perfectly the rather grizzly subject matter of the lyric. The funky 12/8 grove of “Patience Endures” just sticks in your mind and is reminiscent of a Steely Dan classic. For me the highlight of the album is the title track “It’s The Peace That Deafens”. This gentle jazz waltz stunned me with it’s simplicity proving again, less is more.

This album is difficult to categorise; it’s not Jazz, it’s not Soul and it’s not World Music and yet it’s all of the above. I’m sure it will appeal to a wide audience. Once again with “It’s The Peace That Deafens”, Ola Onabulé has shown that he is more than just a great performer with an amazing voice, he is also equally competent as a song writer and producer. I cannot recommend this album highly enough.

Title: It’s The Peace That Deafens