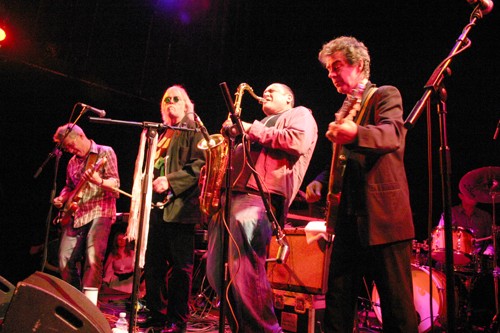 To say The Blockheads have still got it is a bit of an understatement and tonight, on a rainy, cool July Friday night, the Music Room in the backwaters of Ipswich was the venue at which the mighty power of The Blockheads was unleashed on an intimate yet expectant audience.

The Music Room in Ipswich was the venue. The rather nuclear feel to the occasion resulted from a large room and a somewhat elite audience, due to a combination of a new music venue near Ipswich Waterfront and low key promotion but nevertheless, those who found their way to this superb venue were not disappointed. A stroke of genius saw local band Fisti kuffs cast as support. Lively, engaging and with a set list including numbers such as ‘El Psycho’, ‘If You Die’, ‘Slut’, ‘Jelly Tots’, ‘Shut Your Mouth’, ‘I Luv Ya’ and ‘Sombrero’, they provided an hour of entertainment with immaculate drumming, insane lyrics and proved more than worthy of the occasion. They warmed the audience and set the stage for the Blockheads. Tonight they comprised Mickey Gallagher on Hammond organ, Chaz Jankel on keys, vocals and guitars, John Roberts on drums, Nathan King ( level 42) on guitar, Yaron Stavi on bass, Gilad Atzmon on saxes and clarinet and Derek Hussey as front man/singer/raconteur.

Songs flowered effortlessly from the band – both well-known and newer ones including ‘Wake Up’, ‘Rhythm Stick’, ‘Sorry’, ‘Reasons To Be Cheerful’, ‘Clever Trevor’, ‘Sex and Drugs and Rock and Roll’ ‘ What a Waste’ and many others rolling with ease from the experienced band. The audience warmed more with each song and the atmosphere rose by degrees until the final number ‘Lullaby for Francis’ closed the show. And it was a show – these musicians are tight, tweaked and honed, knowing just how to structure a set, how to use the musicians, the right vibe and offer opportunities for soloes. Yaron Stavi, stepping into the shoes of Norman Watt Roy (away with Wilko Johnson) proved a mighty bass player, if slightly less sweaty then the absent Norman and had a couple of excellent solos. Guitar duty for Johnny Turnbull was taken by Nathan King who proved himself worthy of the task and the sax of Gilad Atzmon proved, as ever, wondrous.

There was, however, just a slight sense of weariness about the band – a feeling they had done this so many times before that they are in danger of becoming just a tad slick – and that would never do for the mighty Blockheads. A touch of something new and a few rough edges worn back in might be in order but who am I to say? However, what this band do time after time and every time is entertain and tonight proved no exception. If ever you are in the situation where Mr Hussey adjusts his shades, tweaks the mic and says ‘We are The Blockheads and we go like this..’ then you are in for a treat.