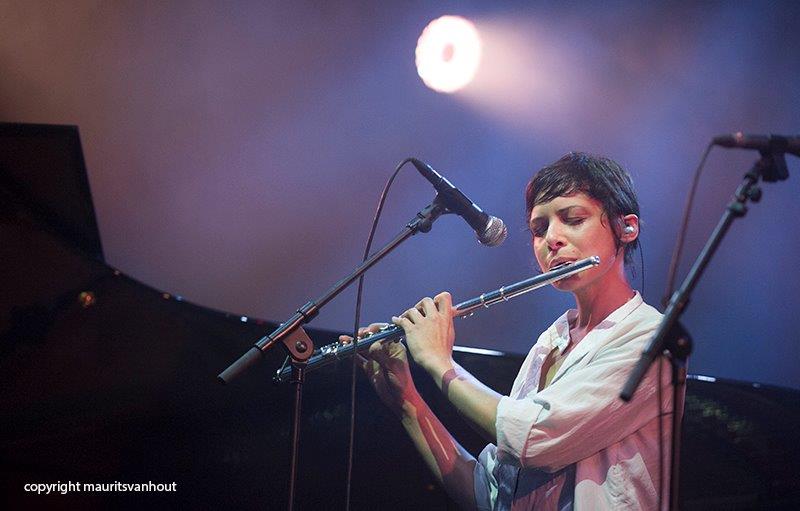 This year the Gent Jazz Festival attracted a record number of visitors. During the seven day festival a total of 38,000 visitors were counted. Festival Director Bertrand Flamang was very happy with the fourteenth edition of the festival, which ended up with five sold-out days. He has great confidence in a successful fifteenth festival next year. The highlights in the second part of the festival (15-18 July) were the concerts by Van Morrison, Gary Clark Jr. , Zaz and Gregory Porter. Biggest surprise was Rhiannon Giddens, a singer with huge potential.

‘Alice on the Roof’ is her name. The young Belgian singer and keyboardist opened the second part of Gent Jazz. Alice combines electronics mixes and jazzy pop music. The emphasis is less on jazz in the second part of the festival.

On Wednesday it was the Women who were most prominent on the main stage. The reputation Andreya Triana enjoys in Britain, where she has grown to become a star, was confirmed by her performance in Ghent; understandably as her voice is one that you won’t forget: full of soul and a fine range.

Melanie de Biasio also performed at the Gent Jazz Festival last year, which was so successful that they asked her to come back. The Belgian singer has a very unique sound (developed). Slow and midtempo is her music, which is almost meditative and her hand movements seem Oriental. She also plays flute and that fits well with the sound of her band.

Top attraction Zaz received a lot of attention on social media when it was announced that she would be performing. Jazz and chanson are two of the ingredients in her recipe and that turned out to be a tasty meal. It was wonderful to be taken back to the music of the last century by this French woman and her band. The performance also featured the Ghent youth jazz orchestra.

Rihannon Giddens made a convincing start to the day. The singer, who also plays violin, has a very expressive voice. She took the audience on a journey through the American roots music with a surprise trip to Scotland: she sang a song in Gaelic. A fine concert with a great band too.

The second act on the main stage also featured a singer: Laura Mvula. Her repertoire is a melting pot of jazz, gospel, soul and pop. In the backing band was a harp, an instrument that you don’t often see at a jazz festival. Laura Mvula has a penetrating voice that carries well. Conclusion: another good singer from England.

The band of Gary Clark Jr. plays in a classic blues formation: two guitars, bass and drums. The American is the new blues hero of the moment. His performance made the concert tent vibrate. Fine musicians, with Gary Clark in the lead role as guitarist and singer and with fellow guitarist King Zapata getting the space he needed to excel, he grabbed that opportunity with both hands.

Rodrigo (Sanchex) and Gabriela (Quintera) previously performed in Ghent. They were given a hero’s welcome when they entered the main stage. The two Mexican guitarists were hired to make the last concert of the day was a party and a party it was. Especially when dozens of spectators were invited on stage to take part in the show.

Singer-songwriter Bony King played a home game in Ghent. Singing in close harmony and music with an American atmosphere. Quiet listening music with beautiful tones of the slide guitar. Americana made in Belgium.

Many had been looking forward to Ginger Baker Jazzconfusion. The famous drummer (75) received a lot of support from percussionist Abbas Dodo during the show. It became a percussion festival with the support of tenor saxophonist Andy Shepherd and bassist Alec Dankworth. Ginger Baker is no longer the virtuoso of yesteryear, but with regards to his musicianship, there is no doubt. When leaving the stage the drummer tripped but he nevertheless came back for an encore.

Van Morrison was in good form during the final concert of the day. His voice sounded excellent. For the first song he played alto sax and then for over one and a half hours he performed a selection from his repertoire. The public enjoyed it to the fullest. It was a worthy closing concert which ended with a performance of ‘Gloria’. After a few minutes ‘Van the Man’ left the stage and the band was given the honour of bringing the concert to a close.

The final day began with the English trio Gogo Penguin. Three young men from Manchester who play in a ‘ classic line-up ‘ of: piano, bass and drums. Their music is anything but old-fashioned. From a collective sound, short solos were played, somewhat like the trend that the Esbjörn Svensson Trio introduced in Europe.

Snarky Puppy has become a collective in which about 40 musicians are united. Bassist and band leader Michael League played, along with eight fellow musicians. The music group from Brooklyn is now an act that is as solid as a rock and the Grammy Award, that was awarded last year, says enough. The band mixes electronic music with ‘ traditional jazz’ providing a swinging hurricane of sound which sounded mellower only during solos.

Neneh Cherry has been active as a singer for 25 years. One of her best-known songs is Seven Seconds, which she recorded with Youssou N’Dour. In her music of today there are influences of rap and hip-hop. Poetically she responded to the vast audience, “I see a sea of people, there are so many of you.” She was accompanied by synthesizers and drums only and that made the concert somewhat boring.

Gregory Porter closed off the festival and he did that in style and with class. The most popular jazz singer of the moment performed with the allure that comes with his status. The Quartet that accompanied the singer also deserves praise. Yosuke Sato’s alto saxophone balanced perfectly with Gregory Porter’s voice. The singer enjoyed the enthusiastic audience and the public enjoyed the songs with touches of blues and gospel songs. The interaction made the concert a memorable one.

And Gent has more jazz to come this year. Early September there is Jazz in the Park, four days of concerts in the southern part of the city. And they are for free! In 2009 the UN-organization Unesco has appointed Gent ‘Creative City of Music’ but the privilige of receiving this award brings obligations with it. Amongst others Tutu Poane, Tineke Postma and Armina Figarova will perform.