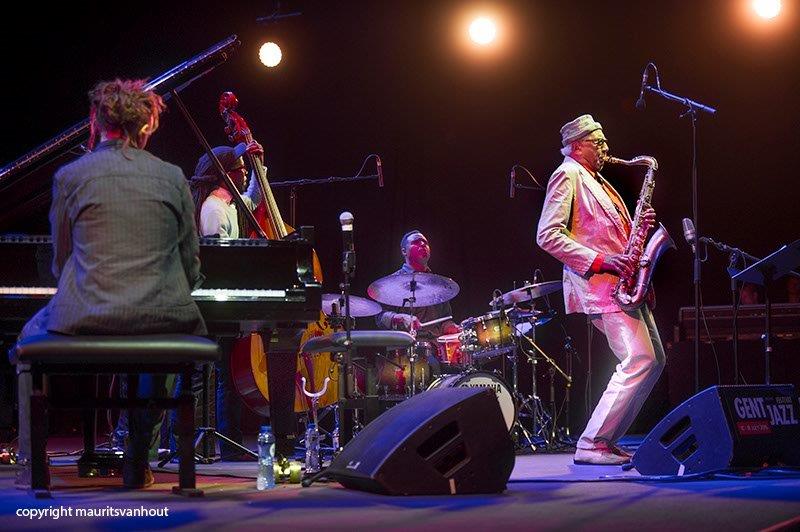 The musical highlight of the first part of Gent Jazz was the concert by the Charles Lloyd Quartet. Other memorable performances came from Bill Charlap, Abdullah Ibrahim,  ‘Made in Chicago’ and Vijay Iver.

Modern Cuba
Cuban pianists are [almost] always loved. They play from their heart and are often virtuoso and David Virelles was no exception. With accompaniment by bass, percussion/vocals and drums, he performed rhythmic and swinging music, but there were also strong influences of music styles not normally associated with the Caribbean island. It seems Cuba is undergoing modernisation musically as well.

Timbre
The Canadian pianist Kris Davis led a formation of four bass clarinets. Heavy stuff, literally and figuratively. It provided a particular timbre, partly because in addition to the piano, a Hammond organ, guitar and percussion were mixed with the reed instruments. An exciting concert, with surprising twists and turns.

Marathon
Four celebrities were on stage at ‘Made in Chicago ‘. Drummer Jack Dejohnette led a Quartet with pianist Muhal Richard Abrahams, bassist and cellist Larry Gray and saxophonist Roscoe Mitchell. This adds up to approximately 300 years in age, but they turned it into a true marathon. They played for 55 minutes without a break. After the first number there was a intermission of ten minutes and finally a short encore. Conclusion: a true tribute to The Association for the Advancement of Creative Musicians, which was ‘born’ in Chicago.

Circle around
The Moroccan band led by Bachir Attar mixed traditional music with modern sounds of Laswell and his musical colleagues. North America met North Africa, while the North American music tradition is in part based on what the slaves took with them from Africa to the continent. The circle was round. Graham Haynes on trumpet, gave a a strong solo performance. Bill Laswell has performed with a varied mix of artists and the bass player has performed with the Master Musicians of Jajouka.

Smile
A tradition in Ghent is a concert, given by Conservatory students with a featured guest lecturer. This time, Saxophonist Mark Turner has taken on the project. The level of acomplishment and expertise that the students have achieved, both as musicians and composers, is quite amazing. The proud parents in front of the stage were gleaming with pride and guest lecturer Mark Turner went backstage after the gig with a smile on his face.

More attention
The Yuri Honing Acoustic Quartet played three short sets on the Garden Stage. It was a strong performance with beautiful compositions by the Dutch tenor saxophonist, in front of an attentive audience. This Quartet deserves more attention.

Chamber music
With the Abdullah Ibrahim Trio Mukashi, the focus in on the pianist who shares his music with cello or bass, flute or clarinet, rather than a traditional line-up of piano with bass and drums. This creates many sound variations which were fully exploited by the Trio. The performance was held in a festival tent and acoustically, not the best venue for this genre of music, which was almost meditative every now and then.

Explosion
Charles Lloyd was somewhat agitated at the start of his concert. It seems that the tenor saxophonist resented the fact that many visitors were still on their way to their seats when his Quartet was already on stage. Towards the end of the concert he apologised but for an artist of his status, as an audience, you need to come on time. The false start to the concert had no influence on the quality as shown by Charles Lloyd (tenor sax and flute), playing with unprecedented intensity, while pianist Gerald Clayton showed himself to be a strong accompanist. It seems like the ravages of time have had no grip on Charles Lloyd, who is now 77. The concert was an explosion of creativity.

Refreshing
The last concert of the second Festival day got underway after midnight. The performance by saxophonist Toine Thys and Trio was held on the Garden Stage. The tones of Arno Krijgers Hammond organ led the visitors swinging into the night.

‘Love for Chet’
The Stéphane Belmondo Trio, with their performance of “Love for Chet”, created an atmosphere which transported you back in time, decades ago. Trumpeter Chet Baker played in the 1980s with guitarist Philip Catherine and bassist Jean-Louis Rassinfosse while Belmondo shared the stage with bassist Thomas Bramerie and guitar master Jesse van Ruller. They performed a program that Chet Baker could have played, especially with Belmondo on flugelhorn this concert was a worthy tribute.

Example
Pianist Bill Charlap is no innovator in terms of repertoire, but as a pianist, he is an example for many. His trio with bassist Peter Washington and drummer Kenny Washington is one of the best in the business. You can see that he likes to play his music in front of an audience. In up tempo numbers you can hear his virtuosity, it’s just his playing style, always pleasing to the ear. In ballads he is almost tender.

Refined taste
Pianist Michel Bisceglia performed three times on the Garden Stage; a solo set, a set with guitarist Olivier Loevel and a set with his trio (bassist Werner Lauscher and drummer Marc Léhan). He is a musician with a refined taste. Just right.

The Crooner and the Lady
With Tony Bennett and Lady Gaga pulling large crowds, the festival site was crowded giving photographer Maurits van Hout more than enough material to capture on film especially the many Gaga fans, recognisable by their outfits. On a lesser note, the professional photographers covering this festival were prevented from doing their work in the festival tent during the concert of the Crooner and the Lady.

Tony Bennett (88) has his best years as an artist behind him, but performed adequately. His timing remains remarkable. The voice of Lady Gaga was during the closing concert of the first weekend Gent Jazz not in top condition which did not bother the enthusiastic public at all. The show was what is had promised to be.