Enrico Pieranunzi, Tina May, Tony Coe | Home Is Where The Heart Is 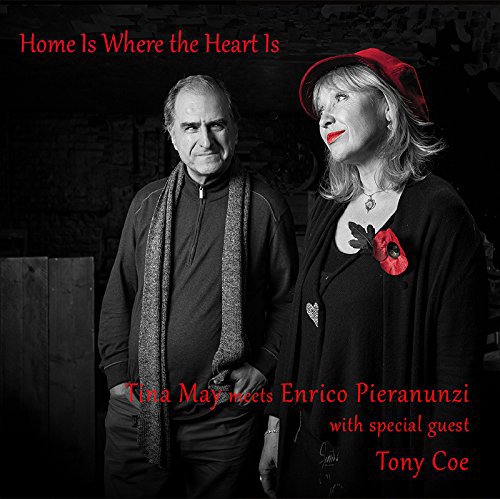 Enrico Pieranunzi is an Italian pianist and composer who has worked with Charlie Haden, Lee Konitz, Bill Smith and many more. He received the Djangodor Award (France) for best European jazz musician not once but twice in 1992 and 1997 and the 2003 Django d’Or (Italy). He successfully fuses classical based compositions with jazz, creating music which is pleasing on the ear but also enhanced on this CD with Tina May’s sultry voice. May has had 14 CDS released on the 33 Jazz record label and this is a collaboration borne from the fortuitous meeting of May and Pieranunzi. After hearing some of Pieranunzi’s compositions, May put lyrics to them and the result is this album.

The first track, ‘Don’t Forget The Poet, Please’ is a delicious combination of Pieranunzi’s delicate classical style and May’s expressive interpretation of the music. ‘A Nameless Gate’ follows which is a gentle tale of dreams worked over gorgeous rolling piano. There is a lovely middle section where the voice is used as an instrumental vehicle wrapping around the notes of the piano before returning to the lyrics. ‘The Night Bird’ introduces Tony Coe on soprano sax and is a layered, sumptuous track interlacing sax, voice and piano in what becomes a beautiful exercise in counterpoint at one stage. May pushes her vocals, touching the ceiling of her upper range, just keeping it sane, while the soprano sax and piano work together to make sure sanity never enters into it. A great track.

‘With every Smile of Yours’ (O! Le Feu Dans les Yeux) has echoes of French cabaret and is a fun, zippy number using both French and English as the languages demonstrating the overarching feel of the music, unbroken by the barrier of language. The piano is very much to the fore on this track and it provides the perfect vehicle to show the skills of both players. ‘Within the Hush of Night’ (Within the House of Night) is a sad, moody number, followed by ‘I took Your Hand In Mine’ (Fellini’s Waltz) which is penned by Pieranunzi and tells the tale of star crossed lovers meeting. Ellington/Strayhorn’s ‘Day Dream’ is given a sultry, emotive twist by May, Pieranunzi and Coe. Coe’s solo in the middle section is a lesson in interpretive playing and stops just short of being over worked. Whilst May’s clear vocals and dexterity lend the music a quality the composition deserves.

‘Home is Where The Heart is’ (Distance From Departure) is a gorgeous, rich, rolling piece sliding the theme from voice to piano in almost seamless ripples. May’s voice comes across rich and vibrant on this track and the piano is simply amazing.
The final track, ‘This is New’ is a May/Pieranunzi treatment of the Weill/Gershwin number and the familiar lines are interspersed with joyous plays on the vocal lines and little improvisations on the piano which cannot fail to make the listener smile.
Overall, this is a CD stacked to the brim with quality. The working of the players together brings a quality and richness to the music, whether on the original tracks or on their workings of the standards.

May has a resonant, chocolaty quality to her voice in the lower notes and an almost ridiculous ability to soar and dive. Her range pushes beyond 2 and a half octaves which is impressive for any instrument and May maintains the quality on both the chest and higher notes. Her voice melds around you like warm arms and her embrace is, for a while, gentle and protective, before throwing you off on a sudden vocaleeze extension with a laugh. Pieranunzi’s piano of course adds to that richness, emphasising the depths, playing little amusing counter pointal runs behind the sonorous vocals. His interpretive playing makes the perfect foil for the emotive style of May – a union made just outside the doors of musical heaven. Tony Coe’s sax on tracks 3 and 7 adds yet another layer of depth and quality. Coe has played the bands of Humphrey Lyttleton, John Dankworth and Stan Tracey and worked with Dizzy Gillespie, Stan Getz, Zoot Simms, Lee Konitz and Ronnie Scott amongst many others. He was the first non-US based player to receive the Jazzpar Prize – also known as the ‘Jazz Nobel’ in 1995. He has played on many film sound tracks and composed film scores himself. Having his quality playing on this CD is something of a coup and the two tracks where he works his soprano over the vocal and piano are wonderful interludes.

Enrico Pieranunzi says he is very proud of the results of this collaboration.