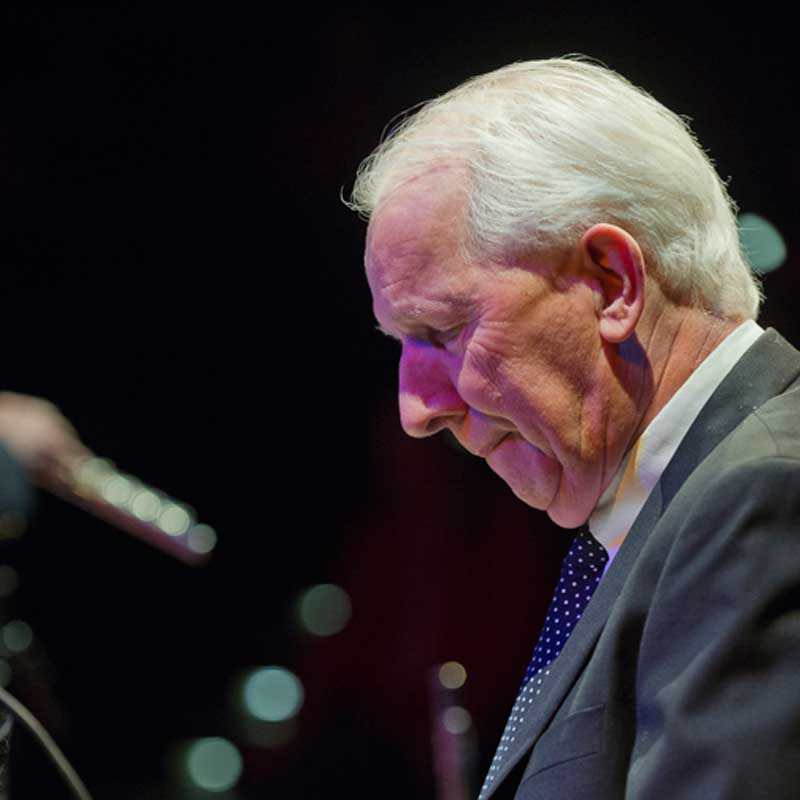 Pianist Rein de Graaff is an entrepreneur in jazz. During the last 35 years he has invited dozens of American musicians to visit Europe and tour with his trio. According to de Graaf, they loved coming to Europe, often staying at his own house in the northern Dutch town of Veendam.

Since 1980 the Rein de Graaf Trio performed with numerous guest soloists including Dexter Gordon, Johnny Grifffin, Frank Morgan, Ronnie Cuber and Eric Alexander to name just a few. The complete list includes dozens of jazz masters both past and the present. In addition he also invited many young and talented Dutch musicians to join the tour.

Also in everyday life, de Graaf was an entrepreneur. This had the advantage that he did not have to earn a living purely as a musician. At present he has long retired from the business world however a jazz musician never retires although de Graaff (1942) has slowed down a bit the last few years.

Rein de Graaff is an icon in the Netherlands and over the years has been awarded many important jazz prizes including the prestigious “The Boy Edgar Award” and the “Bird Award”, presented at the North Sea Jazz Festival. He also enjoys the admiration of dozens of high profile American musicians, who have been out on the road with him traveling and performing throughout Europe. De Graaf used to organize four of these tours annually and occasionally there would be a fifth. All in all a great a massive achievement when you consider all this was done between his work running his business. Currently he is organizing two tours per year, he believes that’s enough at his age.

When speaking of his tours de Graaff stated “..we still play with the same principle. My concerts are jam sessions. Beforehand we agree what we will play, but the music is not rehearsed. Norman Granz did did the same with his Jazz at the Philharmonic. A good rhythm section and change the soloists. That’s the way to do it, I think. There are exceptions of course. That is if you do a tribute, as I have done for the music of Gigi Gryce.”

When you enter the hall of his house you can see a large portrait of Art Tatum. Still, de Graaf says Tatum is not his idol. “No, Bud Powell is my favorite. I saw the painting of Art Tatum hanging in a jazz club in Rotterdam, where I had to play so I called the painter and asked if he had a painting of Bud Powell. Unfortunately he didn’t so I bought the Art Tatum. The painter then quickly made a portrait of Bud Powell. I like such an attitude of an artist. I bought that painting as well.”

Not many people know that Rein de Graaff also plays vibraphone. “I bought that instrument from Dave Pike, he had two of them. I don’t play it often, I found when I played the instrument to much, I began to have trouble with my touch on the piano. I remember playing vibraphone once during a lecture by Dave Pike. He explained how the vibraphone works and I then played examples. I played for example like Red Norvo, or Milt Jackson, Lionel Hampton. All of which had a different approach and a unique sound. Milt Jackson played vibraphone with the motor running soft, Lionel Hampton had always had it run fast.”

Shortly after the interview, Rein de Graaff traveled to the United States with his wife. Not only visiting musicians, also looking for LP’s. This time the mission went to Chicago and New York. His collection of original editions of LP’s amounts to thousands, all stored in racks in his studio. “I visit record fairs regularly, a collection such as this is never finished.’’

His passion for collecting is also evident in another room in his house: the archive. There he keeps everything that over the years has been published about him in newspapers and magazines. There are also tapes with recordings of many of his concerts, both video and sound. So far his discography stretches to more than fifty albums all released under his name. Of course these also form part of his collection. Covering the walls of the studio in his home de Graaff’s career is further documented, hundreds of photos with musicians on one wall and dozens of posters on the other. The Dutch bebop professor, as he is called, has a rich career behind him, both as pianist and producer. His career is layed out on the wall, as if in a museum.

De Graaf worries about the future of jazz and when asked what he thinks jazz is he stated “it has to swing…. Much of what young people are doing today does not swing, and I think it’s not jazz. You hear a lot of Latin and rock music, but that is no real jazz. It almost seems that only the older musicians can swing.”

Many young people play very well, though. Make no mistake. They can play very well, but it is often other music. Last year I was at the North Sea Jazz Festival in Rotterdam. There was only one hall where straight ahead jazz was played. One hall!

And interest in the real jazz loses ground in the United States as well. Pop music is everywhere these days. There are thousands of jazz musicians in New York, but there are five or six clubs where you can get a decent fee for a gig. Every night there is live jazz at dozens of places, but the musicians play an entire evening for a few bucks.”

Moving forward, De Graaf went on to say “In 2016 I’m sixty years in the music business. I played my first concert when I was fourteen. No bebop, it was Dixieland in those days. I should probably start thinking about an anniversary tour.’’

Tour or no tour, Rein de Graaff’s slogan will remain: “It do not mean a thing, if it is not got that swing.”