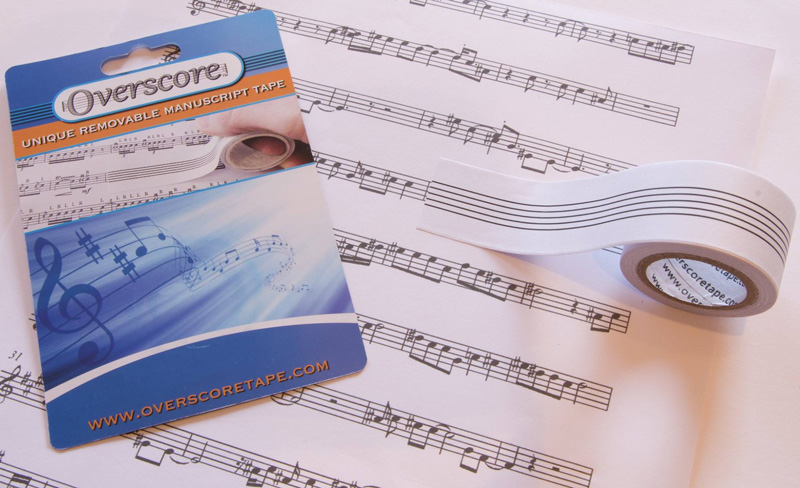 I’m sure I’m not the only person on earth that once in a while sees a new product and thinks “Now, why didn’t I think of that!” Earlier this month (and thanks to Twitter) I discovered a new product designed for musicians that falls directly into that category called Overscore. After some initial investigation and a visit to the Overscore website I was convinced that this could be useful and had to get my hands on a roll. Last Monday the product arrived on my desk Monday and I have to say I was blown away by it’s simplicity.

OK, now I have your attention, what is Overscore? The tweet that initially alerted me to the product stated that Overscore is “The musicians new best friend”, I think I have to agree. Overscore is a 5 meter long roll of removable tape adhesive on one side and a staff printed on the other. The tape allows musicians to quickly make changes to a part in an easy and non-destructive manner. In layman’s terms a sort of a “Post-It Note” for musicians.

Timing being everything, my roll of Overscore arrived at exactly the right moment. Being currently involved in a project my big band where we have a number of charts that to say the least, have seen better days. With this in mind I thought here’s a perfect test case to put my new roll of Overscore to the test. The parts in question have been around for many years and have been altered, amended and annotated to the point of illegibility. Using overscore I was able to clean up the parts restoring there legibility allowing me to easily play the parts without wading through a plethora of redundant penciled in changes.

The tape has enough margin both above and below the staff allowing you to easily add chords, dynamic markings and even lyrics if necessary. The tape is easily removeable and does not damage the original parts or leave a residue once removed. The mat finish allows you to easily write on it with either pen or pencil and if need be use an eraser to remove pencil marks without smudging. In effect that’s it’s that simple and it all works perfectly.

In addition to using Overscore to clean up parts I can imagine the product is also suitable for music teachers allowing them to easily place short exercises in students notebooks or to simplify parts.

Currently the tape is only available in one size that fits most standard manuscript sizes however I understand that other sizes are currently in development including a smaller version that will be suitable for amending printed scores.

Suitably impressed with the product and highly amazed that something similar did not already exist I went looking for the story behind it.

Overscore is the creation of Scottish drummer Stuart Thomson. Stuart stated that he came up with the idea after becoming increasingly frustrated by the hours wasted amending parts for the bands he played with and his students. In his own words:

“I found myself to be very busy transcribing songs for various acts I was performing with and also students, friends and fellow drummers were asking to me to make changes to pieces of printed music. At the time this meant photocopying parts twice, re printing, cutting out parts and glueing them over existing part then re photocopying to ensure a flat tidy print. Other options were post it notes with numbers showing the changes or worst case a messy drawing of notes over existing notes, sometimes even tippexed out first. All very very untidy so the best way was to re-write the song/page out exactly as to be played, by hand or software.

This always proved to be very time consuming, time I did not have or time others could not afford to pay me!!!!

While working away one day The cogs started to turn as I thought “there has to be a much easier way”!!!! So I switched on laptop and went straight to everybody’s friend eBay. I searched for anything music related at all with lines, staff, stave, manuscript, sheet music. Not a thing!!!

Mmmmmm! I’ve always been very creative so I set about designing something to help ME!! Because I was the only person in the world that needed this, how wrong was I !!!!!!”

Based on the initial reactions from his friends and colleagues Stuart realized there was potentially a market for this and sort assistance from the father of one of his students, Matt Clark. Matt had experience with developing products and bring them to the market and with him onboard Overscore was born. While this all sounds simple enough Stuart went on to state that more than two years of R&D went into the product.

“This product had to be perfect or there was no point in doing it.

Glue- is there really that many different strengths of glue available? Too strong, too weak, to thick, too bumpy, smells too strong, the list goes on and on! After many, many, samples we got there with the glue.

Ok next the paper? Too thick, too thin, too transparent, too glossy, not white enough, again many samples were handed to me until it was perfect.

Next was to match the paper and glue, as the paper was now our desired weight etc the glue had to be able to hold it onto desired position by the user perfectly. This almost took us back to square one with glue but we definitely got there. Next the lines, this was the fun part.

Industry standard is 8mm overall which is 2mm between each line. However this information from Mozart wasn’t proof enough for me so I set off with my very precise engineering ruler to my local library which has quite an extensive range of printed manuscripts and general education/music books. Task was simple, measure the line spacings in around 400 books. Librarian was very unsure of how to deal with me, but once again I got there in the end, yip 88% of all printed music has 8mm lines, oh and lets not forget all, almost all music has ties, dynamic marking’s , etc so the Overscore roll would have to carry an overlap. Ok let’s start measuring again, I’ve come this far so no short cut’s now. Short answer is an overlap of 8mm top and bottom would be perfect and if you need to cut a wee bit off weigh that up against the grief in the start of this story.”

With the R&D done, Stuart and Matt went on to deal with taking Overscore from the prototype phase and bring it to market. Not a small job when you consider what’s involved, patent’s, trademarks, manufacturing, storage, logistics, shipping, etc. Earlier this month all had been completed and Overscore was introduced to the world.

With Overscore now available, according to Matt and Stuart, the hard work has just begun,

“We now have to get the word out. It’s very early days but we are being shown a lot of interest from Musicians, orchestras, marching bands, education and retailers..”

Based on my experience using Overscore and the reactions I received from my other band members I can’t imagine it will be long before Overscore becomes a standard piece of kit for all musicians.

Overscore is currently only available at the Overscore website however will become available at other outlets in the coming months.

To purchase Overscore or to find more information visit www.overscoretape.com