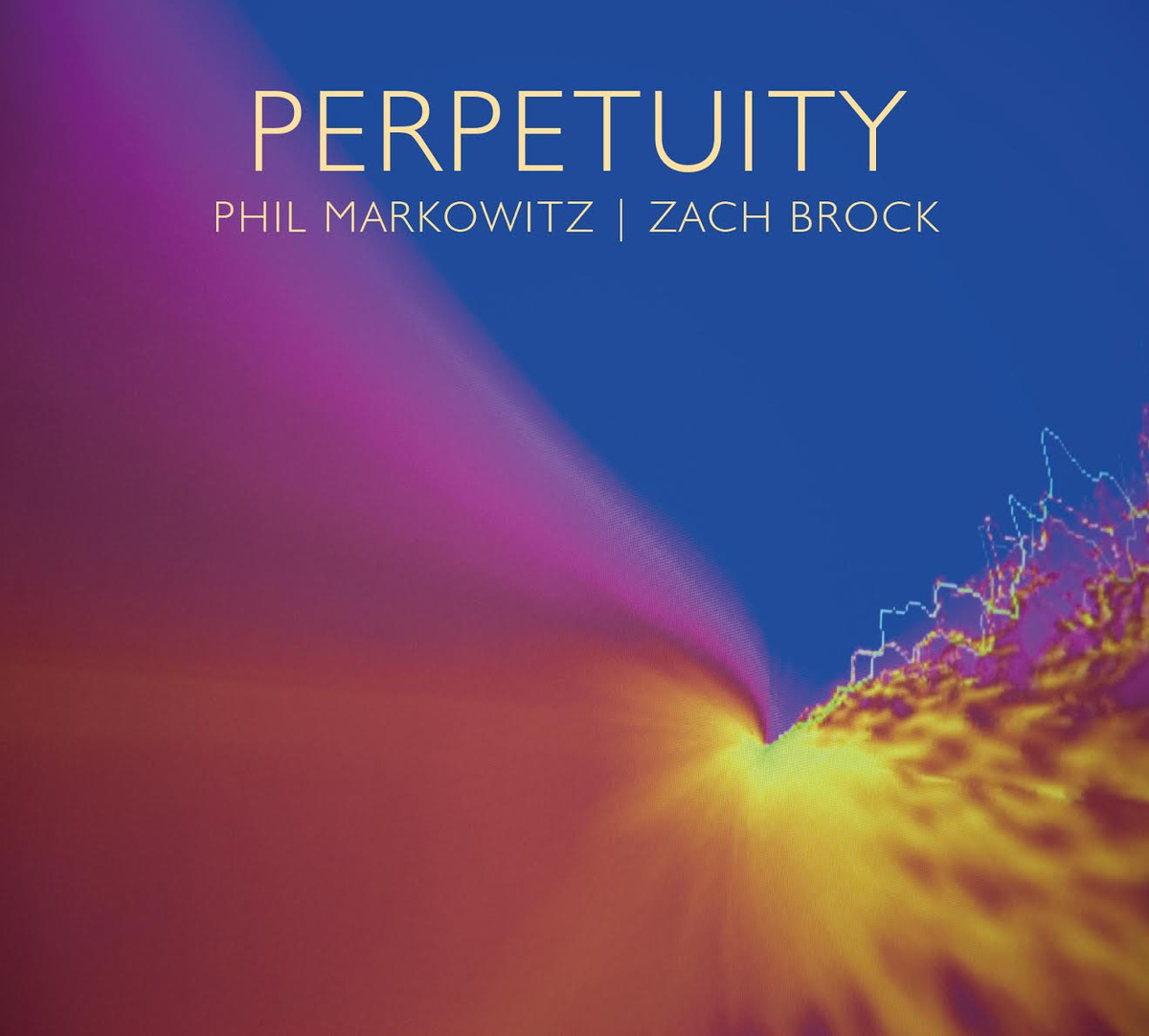 While pianist Phil Markowitz is well known to the European jazz scene his partner in this new venture, Zach Brock, is new to me. With a little research it quickly came to light that Brock is no slouch and has been creating quite a stir in the east coast jazz scene.  Howard Reich, jazz critic for the Chicago Tribune stated recently that Brock is a violinist “whose every phrase argues for the instrument’s value in 21st century jazz”. After my first listen to Perpetuity I would have to agree.

Perpetuity is the second CD I‘ve recently had the pleasure to review from the innovative New York based label Dot Time Records. Once again it’s a gem. The first thing that grabbed my attention with Perpetuity is the stunning art-work, a trade mark of Dot Time releases it would seem.

The album begins with the title track “Perpetuity”. This track is largely based on a bass vamp providing the perpetual motion and laying the foundation for the soloists Markowitz and Brock, to explore the many harmonic possibilities available. Fascinating about this track is the vocal chant loosely woven into Markowitz’s left hand ostinato during the intro and outro. Brock’s composition “Triple Dutch” provides a vehicle for the composer to break down every possible preconceived bias equated with the violin and jazz. Brock’s perfectly constructed and at times Coltranesque solo shows incredible command of his chosen instrument.

One of the highlights on the album is Markowitz’s composition “Notorious Z”. The seemingly disjointed theme integrated into the strong groove laid down by drummer Obed Calvaire provides Markowitz with a well made bed for a stellar piano solo. Other notable tracks on the album are “Six Pack”, a Latin romp showing perfect harmony between drummer Obed Calvaire and percussionist Edson “Cafe” Da Silva and Markowitz’s “Mirrors”, a duet between Brock and Markowitz reminiscent of Arvo Pärt’s chamber repertoire.

The album closes with Brock’s composition “Ankle Biter”. The song opens with a unisono theme played by piano and violin perched on top of a warped New Orleans second line feel. Brock takes the first solo morphing the track into a swing feel for Markowitz to take it further before trading with drummer Obed Calvaire.

The rhythm section consisting of Jay Anderson on bass, Obed Calvaire, drums (with guests, Lincoln Goines, bass guitar and Edson “Cafe”Da Silva, percussion) provide a solid groove throughout the album giving both Markowitz and Brock ample room to take the music wherever they wish.

Perpetuity is not an album to put on in the background, this music is “In your face” and can’t be ignored. Markowitz and Brock have delivered an incredible CD that draws from many traditions, bringing this all together in a coherent set that defies categorization. I recommend this CD highly.

Perpetuity is available at :