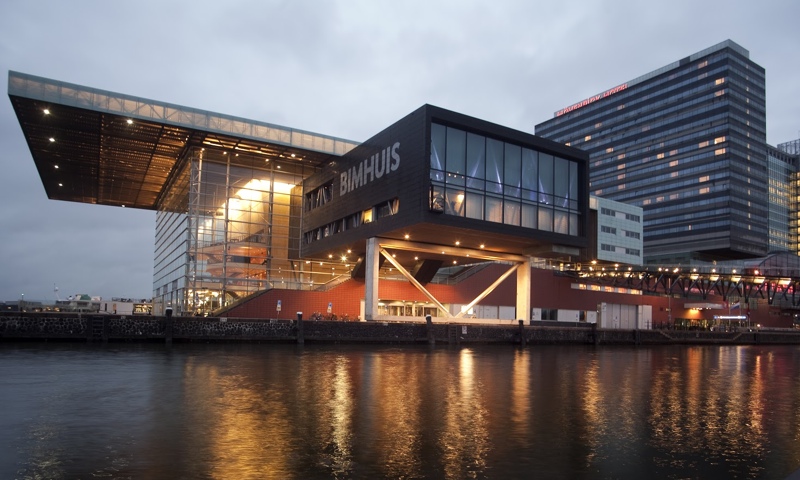 By JOAN GANNIJ  | courtesy of  ALL ABOUT JAZZ

The Bimhuis is turning 40 and is still very much in its prime. Beginning October 1,Amsterdam’s venerable jazz club will celebrate this milestone with a variety of concerts, activities and special events. The Bimhuis opened in 1974 after a lengthy search for a suitable venue for improvising musicians. Over the next decades it would become the most important jazz institution in the Netherlands, not only as a venue but also as a crossroads for the leading performers and budding talents of the Dutch and international jazz scene.

The Bim’s roots derive from improvisational music, but it’s really about live music that transcends genre: music in development, music that breathes and takes risks. The broad program focuses on topical developments but also regularly includes leading representatives of older trends. The Bimhuis is regarded by professionals ”as one of the best music rooms in the world,” according to the Guardian newspaper in London. Christian Scott confirms that it’s his ”favorite club in the world,” Branford Marsalis describes it as ”simply one of the two or three best jazz clubs in the world,” and Marc Ribot thinks ”the Bimhuis should open up a branch in New York…and in Miami, too.”

Willem van Manen, a respected trombonist/composer in the jazz and modern/classic scenes, is one of the founding fathers of the Bimhuis, along with Hans Dulfer, Willem Breuker,Misha Mengelberg, and wine trader Henk Elzinga. As van Manen tells it, Dulfer, saxophonist, jazz mover and shaker and father of Candy Dulfer (who also plays a mean sax!) was organizing the Wednesday evening jazz concerts at the Paradiso back in the early 70s. “Hans and I played in Heavy Soul Inc, the house orchestra, which included Maarten Altenaon bass and Han Bennink on drums. After our first set, the ‘real’ musicians came up to play. And everyone played there!” Indeed, the rotating roster included a veritable who’s who of musicians like Charles Mingus, Sun Ra And His Arkestra, Dexter Gordon, and of course Don Byas and Ben Webster, who were both living in Amsterdam; Byas was married to a Dutch woman. ”All the big players came through town because they were on tour in Europe, so it was easy. That lasted until 1974 when the Paradiso decided they wanted to showcase Pop Music every night. We needed another place where we could regularly organize concerts and that took about three years to find. Henk Elzinga called and said he’d seen an empty space on the Oudeschans behind the Waterlooplein, a former furniture showroom. Dulfer and I got the rent down because the place had been empty for so long. We needed top musicians in order to afford the rent so we approached the City of Amsterdam (Cultural Section) about getting a subsidy. Henk got the bar up and running, and after our initial concerts got good reviews and enthusiastic articles in local newspapers, the City agreed to give us some help to start a permanent jazz podium in Amsterdam. We booked Lee Konitz, Arnett Cobb, Phil Woods and over the next years, word got out among the musicians in New York that ‘you don’t count unless you’ve played in the Bimhuis.'”

The old warehouse was not in great condition and after ten years, the City was approached again about making improvements so the Bim could be more professional: new chairs, lighting, and better sound. The podium actually stood on the floor of the cellar where the musicians played in a half circle. That design would eventually be taken over for the new Bimhuis. In 1995 the location was threatened due to complaints about noise from neighboring inhabitants. The surrounding warehouses had originally been occupied by businesses but after they had relocated outside the city center, their offices were converted into apartments. While the city council had tightened environmental (and noise) regulations, they were also making plans to convert the neglected eastern harbor district close to Central Station into a new cultural hub along the waterfront of the river IJ. The Bimhuis was an ideal tenant for this music center complex, as well the IJsbreker, a venue for modern music along the Amstel. According to van Manen, “Jan Wolff (IJsbreker director) was looking for a larger location and the Gemeente (Municipality) decided to make a music center on the Piet Heinkade.”

Click Here to read the Full Article on All About Jazz