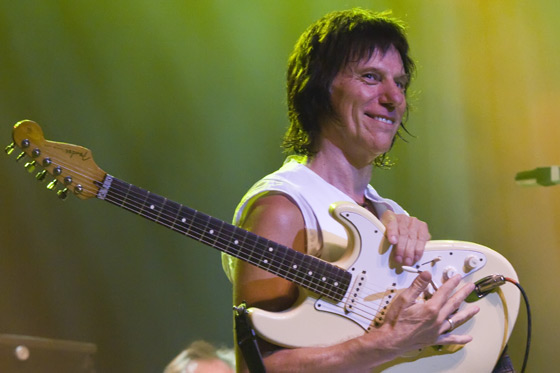 By PHILLIP WOOLEVER, | Courtesy of All About Jazz

Sometimes a man’s reputation proceeds him. Such was the case tonight, where an overflow crowd of 2,000 fans arrived early, and crammed into a steamy bunker of bricks to hear Jeff Beck’s wondrous wails to the electric wind.

With general admission ticket prices around an 80 buck exchange rate, it was good indication of respect. The price of admission proved to be merited, about twenty licks in.

Luckily for hundreds of fans, sensational sounds were the primary pleasure, because for a while, seeing Beck and hearing him were very different things. There were limited sightlines until after about an hour in the steam bath, when hundreds near the front and along the balcony took a breather and allowed a shift in the perimeters.

The place was packed even before noteworthy opener Oli Brown began. Brown is an emerging UK blues star who rocks hard. Tonight his solo acoustic show had more of a folksy vibe, which helped keep the packed mass of politely pressing people relaxed. It says something about the entire show’s quality that people clambered to scale the interior girders for a better glimpse, to the final note.

Beck had spoken of reinventing his tonal vocabulary, and has a new album forthcoming with this current band. If the tour is evidence, the results of Beck’s efforts are already excellent.

They came out hard and heavy with their usual opening songs, “Loaded” and “Nine,” and began a one hundred minute demonstration of passion and prowess. Intros segued into a nice solo by bassist Rhonda Smith. Besides her nimble fingers, Smith later put a stick bass and a bow to good use. “Stratus” remains a decades-long, reliable standard for two major artists, Beck and composer Billy Cobham, and it was no surprise the song got a loud reception here. Beck avoids compartmentalization but maintains a hybrid jazz sensibility and remains a premier player in whatever genre he graces.

Beck got down to business with minimal theatrics but maintained a dramatic image as the sparkling silver bracelets on his right hand glittered. At one point, Beck smiled and put a finger gun to his head, as if signaling a mistake. If so, it was hard to notice amidst stirring riffs.

“Yemin,” by guitarist Nicholas Meier, began with the composer’s astral chords and demonstrated how Beck knew his previously announced “search for a new sound” meant adding a counter-balancing guitar. “Egyptian” progressed along similar Middle Eastern meters, while Meier struck pipe-like effects so well you had to scan the stage to make sure nobody was playing keys in the shadows.

“Goodbye Pork Pie Hat” morphed into a dual guitar symphony, and the band served up some gooey funk on “You Never Know” and “Why Give it Away?” with Smith providing solid vocals. Gently piercing takes on “Little Wing” and “Danny Boy” were about as mellow as the evening got. A lot more pumpkins got smashed than bridges got rolled.

“Blue Wind” might have been the highlight of a show with many highlights, while “Big Block” roared into a glorious grind like Godzilla doing the radioactive jam. For Beck, it was just another day in the life of a true guitar hero.

It was the type of blazing concert where despite the volume, one pulled ear plugs out for pure sound, then put them back in, with hope of hearing more from a revitalized ax-man supreme.

“Some of this stuff is supposed to be on a new album,” Beck said. “I’m sorry it’s not finished yet.” No apology necessary. This project sounds well worth waiting for, but hopefully not too long.

Beck’s respectfully understated finger picking intro signaled “Rollin and a Tumblin,” with various tips of his multiple hats to both The Yardbirds and their pathfinders.

Traditional licks were sweet enough, but it was the sliding, finger plucked jazz runs that made this a special night. The concert was already one of the season’s best, and “‘Cause We’ve Ended as Lovers” put the set well into classic range.

“Thank you for all your support over the years,” concluded Beck sincerely. “Fifty fuckin’ years! I don’t know what I’d do without you. Bless you all.”

Beck did bless them all, the primary scepter a white-bodied Stratocaster. When he laid the instrument on stage for a symbolic, reverberating climax, it seemed to glow like the mother of pearl.