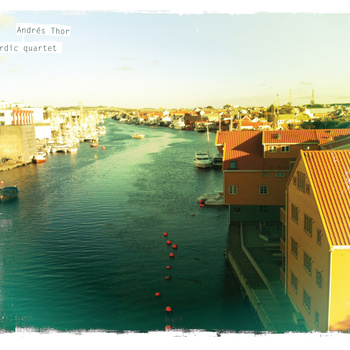 By JAKOB BAEKGAARD | courtesy of ALL ABOUT JAZZ

Even though it is a small country, Iceland has produced many interesting jazz musicians. Among them, pianists Sunna Gunnlaugs and Eythor Gunnarsson, saxophonist Óscar Gudjónsson and bassist Skúli Sverrisson. Add to this list guitarist Andrés Thor.

As a musician, Thor has the distinctive lyrical beauty of many of his countrymen, but he is also a cosmopolitan at heart who stretches across geographical boundaries and this is reflected on his album Nordic Quartet. His group includes Danish bassist Andreas Dreier, who has recently released the Ahmad Jamal-influenced trio album Poinciana (Losen Records, 2014). Dreier has played a lot on the Norwegian jazz scene and it’s also here that Thor has found Norwegian saxophonist Anders Lønne Grønseth and Swedish drummer Erik Nylander.

“Butterfly” opens the album with a Nordic take on the bossa nova with melancholy chords, silky soprano saxophone and Nylander playing brushes while Thor builds his lines around a melodic motif that forms the core of the composition.

Part of the fascination of this album is the subtle experiments with texture and instruments. For instance, “Komodo” incorporates the mournful tones of pedal steel that add extra atmosphere to a strong ballad and “Stuttlega” starts out as a warm acoustic fingerstyle piece in the tradition of Alex de Grassi before it morphs into a jazzy pop groove anchored by Dreier’s bass. “Basic,” on the other hand, is an atmospheric rubato composition where Thor’s playing is reminiscent of Danish guitarist Jakob Bro.

Thor paints a wide musical picture. The mood is gentle and blue, with whispery saxophone and memorable mournful melodies. If there is such a thing as an Icelandic blues this is it.