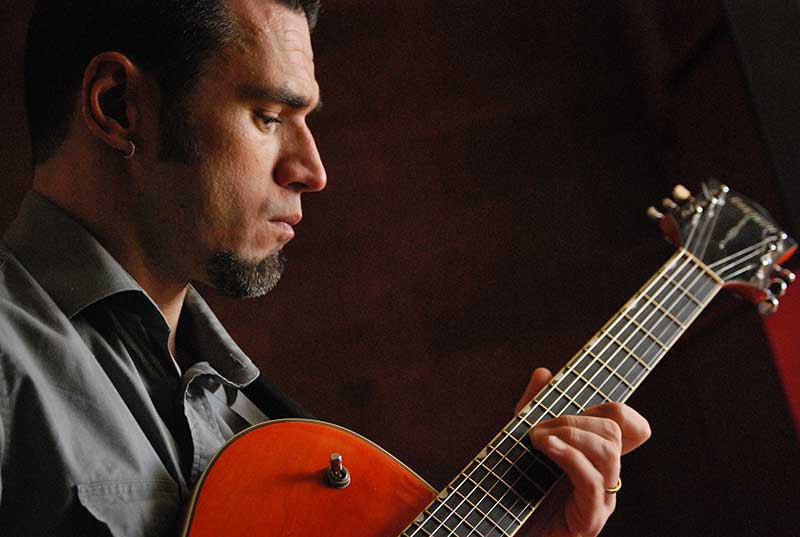 Catalan guitarist Roc Calvet has released a new album as a leader, ‘A strange kind of beauty‘ (Whataboutmusic, 2013). With this new work he sets up his character as a composer and he drinks from different genres such as pop, rock, blues and punk.

These different influences he pours into the tunes he writes. This might sound like nothing original and yes, this is nothing new. But there is something that is different with this guitar player in the Catalan jazz scene: his approach to an underground feeling.

“A strange kind of beauty” is the presentation of Roc Calvet’s internal landscape which pops up seeking the balance between sense and madness, always wrapped by the warm balance of the harmony. For this new adventure Roc Calvet chose a quartet format completed by the tenor sax player Vitalik Bagryi, bassist Joan Motera and drummer Arnau Obiols.

Marta Ramón: You present A strange kind of beauty as a narrative work, an intention that you make possible through guitar speech. Can you go further?

Roc Calvet: When I considered this album I felt that I wanted to move a step forward. I wanted to look for my own voice, a creative identity with an objective of explaining things, being honest and intuitive. I wanted to start from new parameters, searching for something more organic. In this process I developed an interest in “tampering” with the tempo; if I can define it in that term. Thus in my interpretation one can find interesting rhythmic figures with the intention of imitating a human voice which is explaining a story. Although this is nothing new: a lot of boppers have talked like this.

MR: So is there a personal story behind it?

RC: The conception of the album coincided with my first daughter’s gestation. In a certain way, I had in mind the emotional upheaval which occurs during this time and this inspired the arrangement of the tunes for the quartet. Especially the song, ‘A strange kind of beauty’ in which the mood of my personal life is greatly illustrated.

MR: The silence is a main agent as well?

RC: The silence is, surely, what give sense to the rest! It is the respiration, the pause we need for signification to be establish behind the music. It is very important to take as much care of it as we do with the sound. As surely, it is a basic ingredient in the creation of this album.

MR: We can find other music genres influences in your record. Who is beating at the back of your compositions?

RC: In some way, the music you listen to in the moment of the composition influences your writing directly or indirectly. In my case, it was Calexico, Wilco, Björk and especially Olivier Messiaen. What a range of sounds! They go from American folk, to experimental electronic music and serialism. What impressed me from Calexico were the concepts of the tunes as jingles, short resonant inputs, and the use of noises.

MR: There are quite free passages, in which the main presence is performed by the sax. Is this anarchy one of the most representative characteristics of the “strange kind of beauty” in the album?

RC: Absolutely. But it is a designed anarchy, it brings the classic concept of the musical developing in a different direction.

MR: I would define the album a “homogeneous contrast”, I mean one can’t find big differences between tunes but in the inside of the tunes. As there are changing textures and there is a continuous meeting of energy between guitar and the tenor sax. Do you agree?

RC: Yes, it is a good way to define it. All the arrangements are thought to have a distinctive point, even for looking diametrically opposed. I tried to bring that to more, or less, aggressive textures, but it is the internal thread of the compositions. And the clash between the guitar and the sax is not fortuitous, Vitalik is an energetic and exuberant soloist and I am more contemplative. Maybe in this “conflict” lives the secret of the album. As I see it, a quartet isn’t necessarily a solid block; it can also be an addition of individuals. In this duality you can find some delicious musical moments.

MR: Your previous record was a tribute to Wayne Shorter. Can we understand the new one as a presentation of your way to express yourself; as a composer/performer without the necessity to revisit directly your referents?

RC: Exactly. The first album which I was the main composer was recorded in 2010 with Eliptic Project band. Although during this time the need to write tunes reflecting my own identity came up. I meditated much more on them. The tribute to Wayne Shorter opened up to me a world of expressive possibilities, as exploring his music means going into fertile soil. All the work I did for that album led me to the compositions of ‘A strange kind of beauty’, to my inner search.