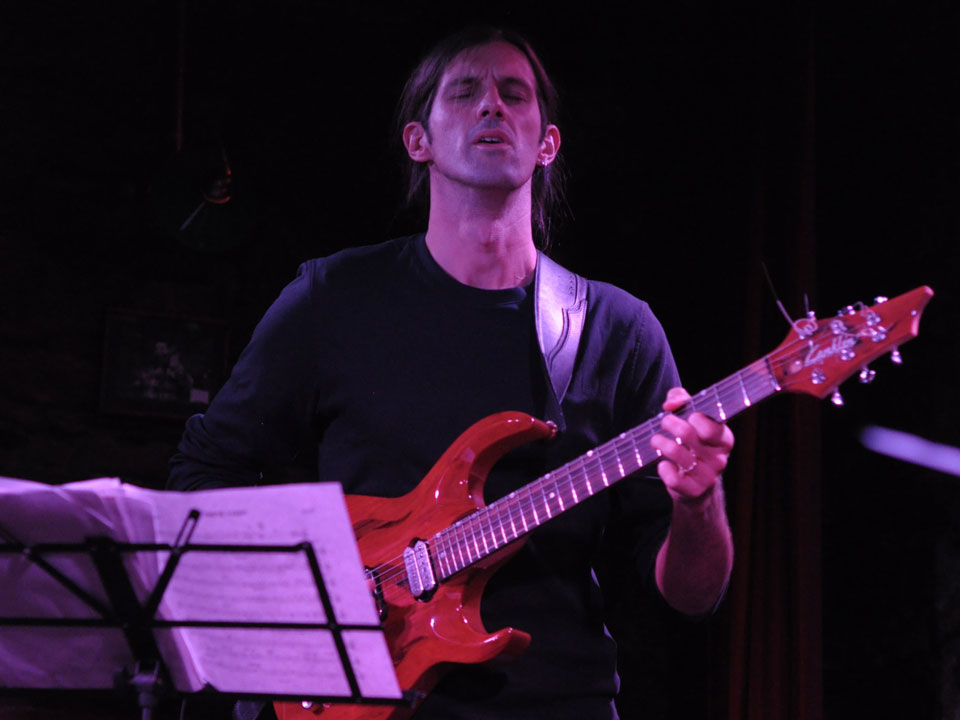 Jan Sturiale is part of the unconventional group of jazz musicians that mix the tradition of creative jazz language with the spirit of rock music and a classical background. His ability to translate his varied musical influences into a coherent jazz language gives his compositions a distinctive character.

This versatility makes of him one of the most in-demand guitar players in the Italian jazz scene; the country where he has developed his professional career. But last summer Jan Sturiale jumped across the ocean to record Electric Water, his new album as leader, in Los Angeles (USA). With upcoming projects this guitarists explores his internal voice through the compositions he has been working on over the last two years. If everything goes to his schedule and he keeps crossed fingers Sturiale’s new material should be released in June 2014.

Marta Ramon: You have recorded your new CD with the same formation but with different musicians than in your previous album: Do not disturb the peace (Drawtheline Records, 2011) . Why did you change the band?

Jan Sturiale : I like to experiment with different kinds of musicians and musical settings. I try to constantly find new musical ways and new musicians to work together. Having those four guys at my disposal to produce my music was quite an honor. I’m talking about Bob Reynolds on sax Vardan Ovespian on piano, Damian Erskine on bass and Chaun Horton on drums. The decision to include vocal was a surprise for me too. These days in Los Angeles I have had the honor to meet Tatiana Parra. She was in town for some concerts with Vardan, so we asked her to be in the project and she accepted. Tatiana sang on three pieces and one of them will be with original lyrics written by Thalma de Freitas. The song is in Portuguese and she absorbed so much of the spirit of the song which is written in a very simple and beautiful way.

MR: Did you feel the responsibility of being the leader?

JS: Being prepared for a recording session as a band leader is something that takes a long time to get right, and is something that can always be improved. I’m really excited on this new music and I can’t wait to send it out there. I think that the main focus is to search for something new and try to be honest with your work.

MR: How did you choose your new sidemen?

JS: I toured Europe together with bassist Janek Gwizdala in 2011. Janek suggested to me a lot of musicians to work with. First of all Bob Reynolds on sax, Chaun Horton on drums and then Vardan Ovsepian who’s music I have listened to frequently in the Los Angeles area. Then recently I thought about Damian Erskine who I really admire, his unique style fits perfect with my new music.

MR: You recorded it in Los Angeles last July. How was the experience in the studio?

JS: It was great! I was blown away by their professionalism and abilities both as musicians and as humans beings. Right now I have a big smile on my face and I’m very impressed on how the new compositions turned out, due to working with such a great company of musicians.

MR: How many tunes we’ll find in the album?

JS: On completion there are 10 tracks. We were in the studio for two days recording all live material on the 17th and 18th of July 2013. We recorded in Los Angeles, with the extensive support of Talley Sherwood as Sound Engineer at Tritone Studios.

MR: Are all they originals?

Yes this is my new album as a leader. All tunes are original.

MR: What are the  differences can we find between your latest record Do not disturb the peace and Electric water?

JS: I think they’re two very different projects and with two diverse bands. So the results are very unique in both records. I can’t really describe what the most obvious differences are but I can say that “Electric Water” seems to me more energetic. On the other side “Do Not Disturb The Peace” is very lyrical in a certain way and is more peaceful.

MR : Will you include electronic effects in the music?

JS: We recorded some electronic effects but we still need to finalize which will be used during the production in April next year (2014) at Bunker Studios in N.Y.

MR: As you have explained, there is a special vocal guest, Tatiana Parra. You also had a vocal contribution in your previous album. What does a woman’s voice provide to your music?

JS: Yes in my previous album I asked a talented singer from Croatia called Alba Nacinovich, whom I met during my jazz studies at the Conservatory in Italy. I love songs; especially popular songs and simple songs. So for me it was a very natural to add vocals. They help the recording to come all together and entwine the melodies with the guitar and sometimes with piano or sax.

MR: How would you categorize your music?

JS: Wow! It’s pretty hard to find a genre. I’ve always thought that music is not about genre rather it is about making good music or at least the attempt to reach that outcome. I have my roots in so many different fields but if I have to answer that question I would say that my style is a composite of jazz and rock influences. I don’t try to play any one particular style; I just absorb what I like and play. If you are curious and open about learning different musical genres, it will flow with however your personality wishes to express it.

MR: Your sound is pretty melodic in ‘Do not disturb the peace’. Do you perform the same role in your next album or do you want more harmonic features?

JS: I wrote this new music with a quintet in mind. I wrote down piano and guitar parts but we had to separate the roles, sometimes Vardan and sometimes myself. All in all it seems to be well balanced.

MR: The hardest work is coming in April (‘14) when you go back to New York for the mixing of the master at the Bunker Studios with Aaron Nevezie. Have you got clear ideas about your final outcome?

JS: Yes, I want to make the record sounds as energetic as it is. I will publish all the sheet music on my website as soon as the record is released. So people can go through the music while listening. I can’t wait to go to NY and work with Aaron Nevezie and John Davis. The record will be mastered at The Vault Mastering studio soon after.

MR: You still don’t know if you finally will search for a label or not. What would be for you the main point to edit it as an independent album?

JS: Now I’m actually considering every option and as you know I decided to release my previous album myself. Some have advised me to hire a major publicist and others have advised me to just put it online and move on. We grew up in an era where artists and amateurs were divided by who was and wasn’t on a record label. Now if you have a good product and you want to release it couldn’t be any simpler. I think that the best promotion is to regularly produce good music and put it out there. Continue to work and stay positive and all the rest will follow.