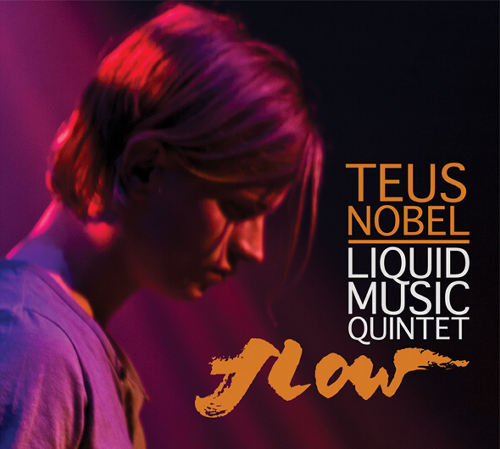 Teus Nobel (*1982) started playing the trumpet when he was nine. Now aged thirty one he has already won several awards in the Netherlands and is a member of the Dutch Royal Air Force Orchestra. Recently he released his first solo album “FLOW”.

The first trumpet-lines in “intro” immediately remind me of Miles’ electric period and give an instant impression of the fluidity of Nobel’s trumpet sound. On his website the musician states that his compositions were “created to find a balance on the flow between comfort zone and the unknown”. While he is playing concrete melodic lines, his sound seems to suggest that he is about to meander into more open sonic territory.

The second track “shifting expectations” does to me, what the title suggests. It is not the openness of Miles’ music where the music is headed. Nor is the free-form playing I detected as a hidden potential in the man’s trumpet sound, where the quintet is going. It’s tightly arranged fusion music instead that sets the tone of the album. Occasionally changing time-signatures create an organic feeling of flow, the playing is concise but to my ears it could well be a little looser.

The quintet’s members are Jerome Hol on guitar, Daan Herweg on keys, Hugo den Oudsten on electric-bass and Salle de Jonge on drums. The players’ precision suggests that they are all conservatory trained and you can hear the pleasure they have playing groovy fusion music that was influenced by “Roy Hargrove, (…) Woody Shaw (and) the music of Herbie Hancock and Pat Metheny” as Nobel states on his website. At times their enthusiasm tends to make them play a little too much, the sophisticated arrangements tend to get a little too tight, and there are moments where the music gets too busy to breathe.

“believe” is a ballad that features the bandleader on flugelhorn and Herweg on piano. Nobel’s lines suggest a quiet openness, refreshingly different, and while the bass-playing is delicate and economic, the drums have a tendency to obliterate the quiet space defined by the horn-playing by constantly playing tightly packed straight-eights, double-time nearly all the time.

“brain storm”, the album’s last track, is a heavy grooving piece that finally makes me want to hear the band live. I’m sure they burn! There are electronic effects on the trumpet and I am, for a minute, tempted to add the much inspired NYC-based trumpeter Cuong Vu (who used to play in the Pat Metheny Group for a while) to the list of “influences” in Nobel’s music. The soloing is, as in many of the arrangements, solo after solo, and I am just wondering if a 21-year-old couldn’t come up with a few more creative ideas for jazz-soloing, when the band finally does play a meandering free-ish outro that seems to suggest where their future journey might be headed.

Followed by a quite interesting little ghost track that is turning in circles, music that seems to go nowhere, like a traveler who hasn’t arrived anywhere yet, but who seems to be on an interesting journey. Or to put it in the words of Nobel’s fellow trumpeter Dave Douglas: “Traveler, there is no road. A road is made by walking.”

Here is a bunch of young players who are inspired and full of energy and a band leader with a great potential. I am curious where their road is going to take them.