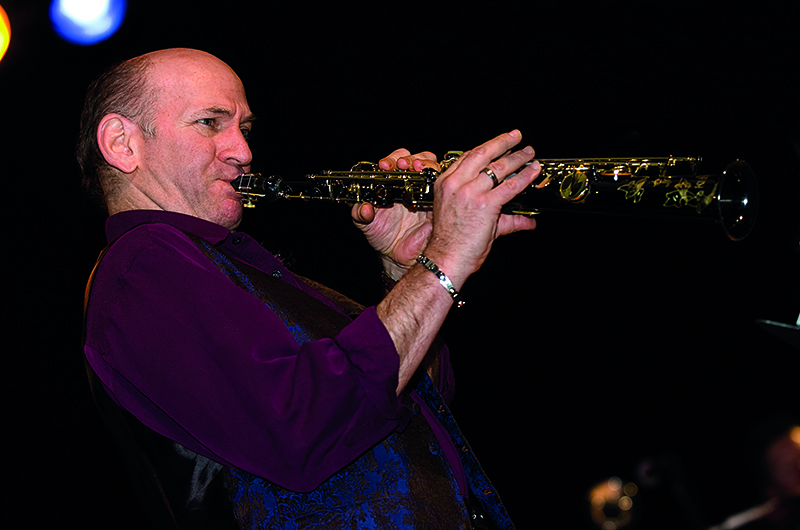 Dave Liebman and the Scottish National Jazz Orchestra have history together. Back in 2001 Liebman guested with the orchestra as featured soloist on the premiere of SNJO director Tommy Smith’s Beauty and the Beast suite. The two saxophonists later went on to tour in a quintet whose blazing spirit was captured here in a fever pitch soprano-tenor throwdown that anticipated the trumpet, trombone and saxophone sections’ entry for an epic call and response with Liebman’s soprano on the mighty, appropriately swinging, Pendulum.

This latter sequence, with SNJO’s entire blowing personnel wittily echoing Liebman’s every statement, was yet another example of the brilliantly convincing manner in which the orchestra became an extension of their guest’s voice in a concert where, instead of him playing music new to his acquaintance, Liebman soared and soloed on arrangements, many of them of his own compositions, that he’s become familiar with over the years.

He wasn’t the only one who soloed with verve and panache: pianist Paul Harrison, making a rare appearance with SNJO, captured the essence of the Elvin Jones group for which Liebman had originally written New Breed, riding the polyrhythmic feel with fiery invention and dazzlingly clear intent. Trombonist Kieran McLeod produced an improvisation of almost stoic effervescence on Off Bird and tenor saxophonist Konrad Wiszniewski followed this with a volcanic, brilliantly developed surge.

There were other passages of essentially small group activity, not the least exciting of which was Liebman’s soprano saxophone successfully daring Alyn Cosker’s drumming to get ever more exhilaratingly intense in a superlative head-to-head on Gazelle. In general, however, the orchestra was fully engaged in arrangements that required and were given the greatest attention to detail from a band that Smith has worked up to a world class pitch.

They were expansive, as on the floating Jung, where the saxophone section actually contributed two flutes, tenor sax, clarinet and bass clarinet in a minor sonic marvel. They danced through Liebman’s appropriation of Cole Porter’s harmonic progression on the reverse-titled Day and Night. And they were a classy classic big band as they moved as one behind Liebman on In a Sentimental Mood.

Liebman for his part was masterful. His tonal range on soprano is phenomenal and his ability to move from nursery rhyme simplicity to fierce but always followable complexity in a solo is wonderful. He’s his own man for sure and the slightly Wayne Shorterish percussive jabs on Port Ligat, which also featured Liebman, on Indian flute, and Smith on its Japanese cousin, the shakuhachi, playing a very effective Spanish scale, only added to his appeal as a communicator. His eulogising of Smith’s achievements as a musician, educator and orchestral director was clearly heartfelt and thoroughly deserved, although as the soloist, the leader and the leader’s charges slipped into one final example of superb jazz harmony on John Coltrane’s Naima, this would have to go down as an occasion when all contributors were equals in a triumph.

More Info about the The Scottish National Jazz Orchestra at www.snjo.co.uk