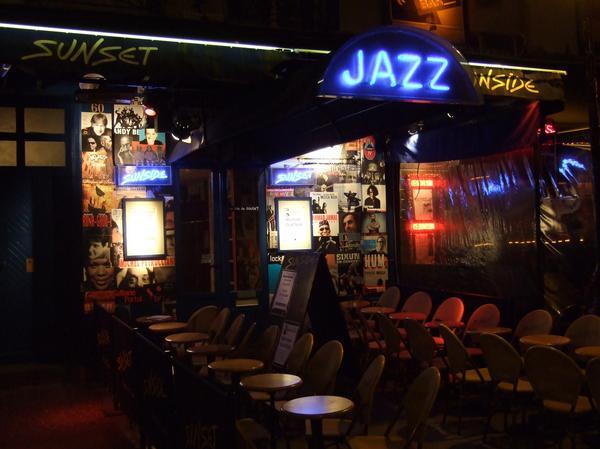 Our featured venue for March 2013 is the Sunset-Sunside Club in Paris. Located in the heart of Paris, between the Forum des Halles and the Centre George Pompidou, the Sunset Jazz Club established in 1983 by Michele and Jean Marc Portet, is one of Europes best known jazz locations.

Located in the heart of Paris, between the Forum des Halles and the Centre George Pompidou, the Sunset Jazz Club established in 1983 by Michele and Jean Marc Portet, is one of Europes best known jazz locations. The original focus of the club was on Fusion, however at the end of 1984 the club appointed Dany Michel as programmer who broaderned the focus with a more mainstreem programing while maintaining the clubs fusion roots. Many still rember the late night sessions with Jaco Pastorius, Didier Lockwood, Sixun, Uzeb, Michel Petrucciani, Henri Texier and Aldo Romano.

By 1989 the Sunset club had become a mainstay in the Parisian jazz scene. With the artistic direction now in the hands of Jean Marie Balzano the sunset club began providing room for international touring musicians fast becoming the place to be in Paris for american musicians including Steve Lacy, Steve Grossman, Frank Morgan, Tal Farlow, Lee Konitz, Benny Golson and many others.

In 1993 the artistic direction moved to Stephan Portet who still to this day looks after the programing. Stephan’s states that he wan’s the club to be “ the club of all jazz. All the stars of jazz will play at the Sunset: Didier Lockwood, Roy Haynes, Bireli Lagrène, Richard Galliano, Jacky Terrasson, Laurent de Wilde, Ravi Coltrane, Dewey Redman…. As well as the great talents of tomorrow (they are now today’s greatest talents) like Truffaz, Julien Lourau, Sylvain Luc, Stefano di Battista, Paolo Fresu, Bojan Z, David Linx, Richard Bona, Magic Malik…”. Under the watchfull eye of Stephan Portet the Sunset club has become one of Europes leading jazz venues with concerts each night of the week featuring well know international touring musicians as well as local Paris based musicians.

In 2001 the Sunset club transformed the resturant into a second stage. From then on in the two rooms known as the Sunset and Sunside room combine to feature programing for acoustic jazz, electric jazz, magnet jazz and world music. The Sunset is dedicated to electric jazz, magnet jazz and world music while the Sunside is devoted to acoustic jazz. In it’s current form the Sunset and Sunside form a single complex in the heart of Paris with two clubs open 7 days a week with two concerts every night. The clubs website states that thier desire is to continue to provide jazz fans with a platform to “discover new musicians and the new musical currents close to jazz. Sunset and Sunside, “Jazz on all floors for all jazz…”

The following is a sample of what you can see in the Sunset – Sunside club in March 2013. You can find the full program and further information on their website www.sunset-sunside.com