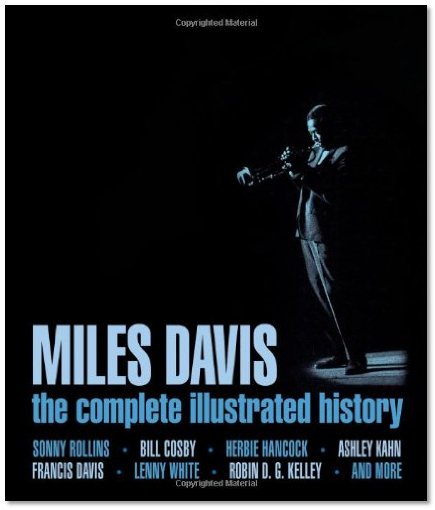 For fans of Miles Davis (like me) this is a great book to add to the library. The chapters (beginning in 1926) are broken down into chronological periods, with different writers for each chapter.

The book is filled with beautiful reproductions of period photographs, posters, postcards, album covers, etc. that really add depth to the essays. As an example, look at page 84 which is a beautiful, full color poster reproduction of the movie Davis scored, Louis Malle’s “Ascenseur Pour L’Echafaud”. Davis improvised the score while watching the movie over a few hours with a very simple agreement with Malle. This music is some of my favorite early Davis-atmospheric and of it’s time-even the various takes included on some issues are worthwhile.

By now most fans are (very) familiar with Davis’ life and music. So is this book essential? Yes, because of the people chosen to write about Davis and the music, who have been close to Davis over his long career-as both musicians and as inside witnesses to Davis’ life in music. Plus, the various (very cool) reproductions that help define each essay and the entire book. The many photos of Davis from throughout his career are especially nice. Check out the photo of a school band on page 16, with Davis seated in the back row with his trumpet, and gold braids on his uniform jacket, and then turn to page 184 to see how much (and how far) Davis has changed.

The combination of a well defined chronology, written information from sources so close to Davis, a number of quotes from Davis’ autobiography throughout the book, and the wonderful reproductions throughout, elevate this to something you might want to check out. This book can sit alongside other books on Davis and his music in your library.